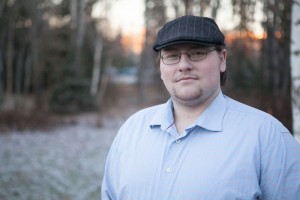 Mark Simon will do well in politics. Here's our first bit of evidence:

As a UAA junior majoring in political science, he spent Election Night Nov. 4 at KTVA Channel 11, feeding information and news of ongoing state legislative races to working reporters and to his professor and KTVA commentator that evening, Forrest Nabors.

If you were watching that night, you didn't see his face. He was right off camera, sitting with UAA political science professor Mary Mathie and Nabors' high school son, Will. All three were scrambling to crunch numbers and deliver accurate race details.

Simon was especially qualified for the role. This season alone, he'd managed three legislative campaigns and volunteered for at least three more. He'd completed a stint last fall in House Democrat Max Gruenberg's Anchorage office, which gave him an eye on state politics.

In spring semester, he qualified to be one of five UAA students heading to Juneau for a political internship during the legislative session. He and his student colleagues will keep the UAA campus informed with "Postcards Home," a return to the personal letters and reports last year's interns shared with campus. Watch for them in Seawolf Weekly.

But precisely on point for Election Night, Simon had created his own cheat sheet for all the legislative races. He'd even researched every 7-day financial report to the Alaska Public Office Commission (APOC) for every race, times two candidates. That was a lot of work. Why?

"I was looking for how much money the candidates had raised over the course of the election, versus how much they had spent," Simon said. That alone made him very valuable to reporters. Because of his work, he knew that two incumbents had outraised their opponents, but spent less than their challengers-just one example of useful election night political insight. 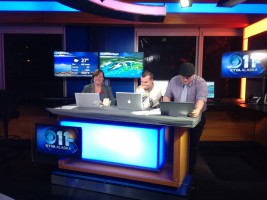 UAA political science professor Forrest Nabors offered political commentary at KTVA. To help, he brought along new-to-UAA Mary Mathie, who teaches American Goveernment at UAA. Cneter is Will Nabors, the professor's son, studying at Service and planning to attend UAA next year. And a true star of the night, behatted Mark Simon, at right.

Reporters and commentators appreciated his work.

"He gave us the rundown on House and Senate races," said KTVA reporter and anchor Alexis Fernandez. "He was very knowledgeable and passionate about the candidates and the issues."

Simon's professor, Nabors, had arranged the unique opportunity to work directly in the newsroom.

"Mark did fantastic research on the state Senate and state House of Representatives races," said Nabors, who started his voting day with an appearance on KTVA's DayBreak and then re-joined the news team throughout the afternoon and evening. "On election night, KTVA reporters and I relied on his preparation and his instant research to inform our coverage and analysis."

Simon reported for duty at 3 p.m., then worked at breakneck speed until about midnight. He was in heaven.

"It was a very fun night and a really great way to end the election seasons," Simon said. "The story I like to tell is that I personally met and knew everyone who I voted for on Election Day. In Alaska, that is entirely possible."

On the radio Some of Simon's political and personal background came out on a KRUA radio program Nov. 21, when he and fellow political science student German Baquero were guests on Student Storyboard to talk about their experiences in the political science department and the wider political world. Baquero and his competition partner, Sam Erickson, had claimed this year's Madison Cup in September for their top knowledge of the U.S. Constitution. Baquero described his preparations, and how much he values winning the engraved tankard that is the very image of what James Madison drank from at the Indian Queen Tavern in 1787 during the Constitutional Convention.

Baquero showed us the prized pewter tankard's glass bottom: "Professor James Muller explained it to me. They really did make them of glass. When you drank, you could still keep an eye on your adversary, they were never totally out of your sight."

Simon joined Baquero on the radio show to describe his special election night experience. Both students will go on to Juneau as legislative interns in the upcoming session.

But back to the premise of this story, that Mark Simon is cut out for politics. Another piece of evidence: He's evolving politically.

As a fourth generation Alaskan (his great grandparents moved to Palmer during the Colony Project in the 1930s), he was headed toward a career in global logistics and supply chain management after graduating from Mat-Su Career Tech High School. All until he got into an argument with a teacher there, someone he affectionately refers to as Mrs. Lowell.

"I started arguing with her one day about the United Nations, and I realized I didn't know as much about politics as I thought," Simon said. She brought home the fact that bumper stickers are not a political science degree, and he set out to earn one.

"I still talk with this teacher," Simon said during the radio show. "I joke that a right-wing-private-industry-touting Republican made me give up a lucrative career in the private sector to go into Democratic politics! It's all your fault, Mrs. Lowell. And I know you are listening!"

See? He collects friends, not political enemies. Another example.

"A few days before the election I was going around to all the different campaigns," Simon said. "I'm a Democrat, and I ended up at the Republican State Headquarters." Before going onto KTVA, he wanted to ask key politicos what races they had their eye on.

"So I go in there and I am talking to the chairman of the Alaska Republican Party. And he asks me, 'Are you Republican?' And I got really nervous. Essentially I flat out told him 'I'm Democrat.' And he was like, "Ah, it's OK. We'll get you eventually!"

Simon told the party chairman that growing up in Alaska, he'd learned that "if I didn't like Republicans, I wouldn't have any friends."

Give us some advice

There's no room for all the wit and wisdom that rolls easily off Simon's storytelling tongue. But here are a few more bits.

"One of the most under-utilized resources here at UAA is your professor. If you talk to your professor, I can almost guarantee they will have some fantastic opportunity or adventure you can go on."

And one more for the scholars among us:

"If you are interested-not just in politics but in shaping policy here in Alaska or nationwide-you can get into a position to make change very quickly. This is a very small state. Bright people who have good ideas are in high demand on both sides of the aisle. Get in there, start talking to people, start volunteering. If you are good, bright, honest, articulate-you will move up the chain quickly."

Spoken by someone who's done it.

And finally, for the rest of us, Simon's "three rules that govern my life:"

"Mark Simon: True stories from the hot seat on Election Night" is licensed under a Creative Commons Attribution-NonCommercial 4.0 International License.