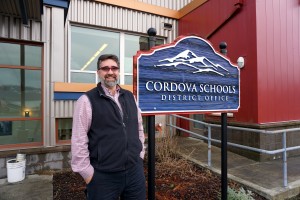 I AM UAA: After 14 years in the Lower Yukon School District, Alex Russin, M.Ed. '05, is now superintendent in the "big city" of Cordova. (Photo by J. Besl/University of Alaska Anchorage)

Alex Russin's education career has brought him everywhere from the neon streets of Korea to the low rolling hills of Mountain Village, Alaska. After several years teaching abroad, he and his wife Tamara returned to the 49th State and found a home at the mouth of the Yukon. In July, after more than a decade on the tundra, he became superintendent of Cordova City Schools. With no traffic lights, but two grocery stores, he and his family now reside in what he jokingly calls "the big city."

But regardless of his location in this massive state, UAA has been a resource at every level of his education career.

From substitute to superintendent

Alex's education career has taken him across the globe. After a simple start as a substitute teacher in Anchorage, he and his wife departed for a passport-stamping journey in international education. They first worked as teachers in Korea, then Taiwan and then nearly four years in Japan. After a six-year sojourn teaching in Asia, they returned to Alaska for the next adventure.

Alaska summers are a snowbird's dream, but the season is less ideal for recently returned educators. Most schools lock down next year's staff before the current year ends, meaning Alex-despite a lengthy résumé of teaching experience-found himself working at Wet Willy's carwash in Fairbanks.

Midway through a languorous summer, Alex's wife encouraged him to go to an education job fair, the last of the year, and he agreed. On the day of the job fair, though, she found him kicking it at home in the mid-afternoon.

Nunam Iqua is a town on the edge (it's Yupik for 'the end of the tundra'). After nearly 2,000 winding miles, the Yukon River reaches the Bering Sea just a few miles from the village's jut of land in Western Alaska. The population barely scratches 200. After six years around the pulsing mega-cities of East Asia, it was certainly a change of pace.

The job called for a long-term sub. "A six-month commitment didn't seem like very much," Alex recalled, smiling, "but it ended up turning into a 14-year career in the Lower Yukon."

Alex first taught middle and high school (as in, he taught all the middle and high school students in all the content areas in one classroom). Meanwhile, he plugged away at his own education on the side. Thanks to UAA's distance initiatives, he could work toward his online master's degree, via very basic rural bandwidth, without ever taking a class on campus.

When Alex graduated in 2005, he not only received his master's degree, but also an educational leadership endorsement to serve as principal. He quickly bumped up to the principal's office at Nunum Iqua's Sheldon Point School. A year later, he was in the district office.

The move to Mountain Village

The Lower Yukon School District is headquartered, for matters of population and convenience, in Mountain Village. The district includes 10 village schools across hundreds of miles of delta, from Kotlik in the north to Hooper Bay in the south, Nunam Iqua at the Yukon's mouth to Russian Mission hundreds of miles upriver.

In Mountain Village, Alex first served as curriculum director for three years, then as assistant superintendent for the next four. In both roles, he regularly flew across the district and, also regularly, would get weathered in. Like many administrators in Bush Alaska, he frequently wound up staying with teachers or spending the night on the school library floor.

In 2010, he earned a second graduate certificate from UAA, this time endorsing him as a superintendent. Again, his UAA education paid dividends and Alex was named Lower Yukon's superintendent in 2012. 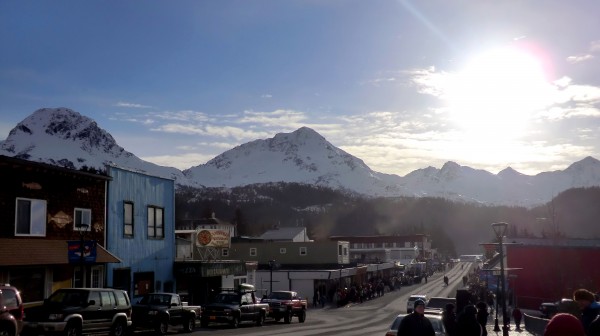 With about 2,200 residents, Cordova more than doubles the population of any village in the Lower Yukon. (Photo by Valerie Svancara)

This July-14 years after arriving in Nunam Iqua-the Russins moved to Cordova. Though Alex's job title stayed the same, pretty much everything else changed. He no longer has to fight the weather to visit schools. He doesn't even have to fight traffic; the district's only two schools are a quick 0.2 miles apart.

"At a single site, the superintendent wears quite a few different hats, so that's challenging," Alex said of his new role. "The day-to-day sorts of things vary greatly." In Cordova, he's involved in everything from HR to special education to oversight of federal programs. He also deals with behind-the-scenes details like title funding and national conference calls. Cordova-though far more accessible-is still off the road system, meaning resources are limited.

Each of Alaska's 54 districts has its unique challenges, though education standards remain the same from Petersburg to the Pribilof's. "We as a teaching staff come into play by contextualizing standards to meet the needs of the community," Alex said. "Making it relevant to our community is part of the art of teaching, and we have great artists here in our schools."

Though recent arrivals in Cordova, Alex and his family have been impressed with the community pride in the small fishing town. "One of the elements that really brought myself and my family to Cordova was the community engagement in the school," he said, citing the booster club, volunteers and donations supporting local education and activities. "It's just really an interesting town that way."

Another interesting facet of Cordova's education: the high school has the state's largest number of students concurrently enrolled at University of Alaska. Prince William Sound College, one of UAA's community campus, offers classes at Cordova High School, allowing students to take college courses-from sociology to Spanish to graphic design-during the school day. Sixty-eight students are enrolled this year; five will graduate with associate degrees this spring before even finishing high school.

Even though he's never had an on-campus class in Anchorage, UAA has still played a part in Alex's career through 15 years off the road system.

"I feel really appreciative to have had the opportunity to go through the UA system," he reflected. "I think the flexibility offered by the programs was really great. I don't know if I would have explored or pursued higher degrees had I not had the convenience of logging in from afar."

"I hope that the system as a whole continues and improves and develops over time. It really does reach a great number of folks around the state," he added.

"The convenience of being able to log in [from anywhere] is just a great opportunity." 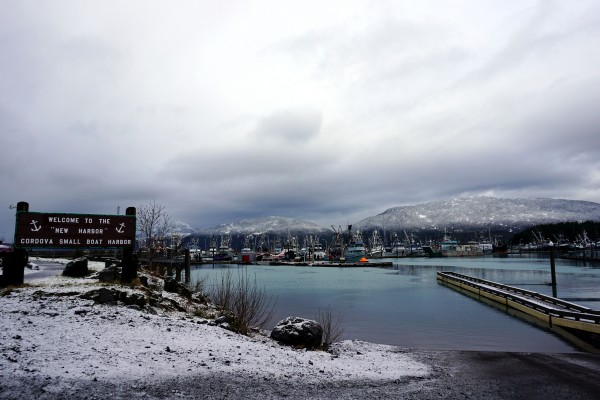 The view of Cordova's harbor. (Photo by Valerie Svancara)

"Educator builds a career off-road and online" is licensed under a Creative Commons Attribution-NonCommercial 4.0 International License.