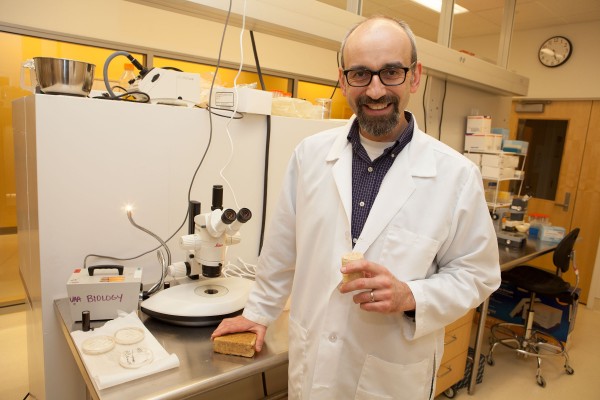 Philippe Amstislavski in a CPISB lab with samples of the "biofoam" insulation he and his team have grown from mycelium. (Photo by Philip Hall / University of Alaska Anchorage)

There's something very Alice-in-Wonderland about the research Philippe Amstislavski and his team just completed at UAA. They grew insulation-the very thing you wrap around pipes and layer under roadways to keep permafrost from melting in summer and heaving in winter.

Most insulation comes from petroleum byproducts. Even when it degrades, it won't fully disappear from the planet-ever.  Recent seabird research shows stomachs full of ingested floating plastic.

In contrast, the UAA scientists grew their insulation from fungus; it will biodegrade to nothing. As Alice might say, "Curiouser and curiouser!" 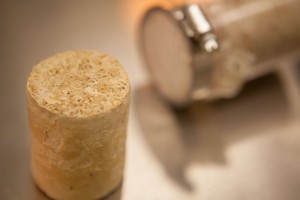 Samples from Philippe Amstislavxi and team's insulation created with aid of mycelium. (Photo by Phil Hall / University of Alaska Anchorage)

First, a little mycology. If mushrooms are the above-ground "fruit" of fungus, mycelium is its hollow branching root-like network underground. The scientists used mycelium from a very common white-rot fungus; you could find some growing on trees in your own Anchorage backyard right now.

With seed money from a $25,000 campus Innovate grant, the team spent a year testing three different recipes for growing insulation. All include mycelium, but they fed the mycelium different things; it loves wood chips, bran, all kinds of organic detritus. As of last Thursday, the team has a patent pending for creating insulation using their unique nutritional blends and biotechnical process; they chose not to disclose details for competitive reasons.

Researchers incubated their recipe batches for different periods of time. In one experiment, after letting the mycelium propagate through a nutritional blend, they broke up the resulting form into smaller chunks and incubated it again. Like a Red Bull-slurping teenager, it re-knit itself into a tighter mat and grew faster and faster. They had lab-grown insulation in seven days. 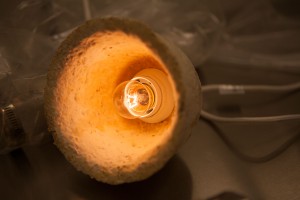 Mostly they grew it in cylinders. But they also shaped it in a mixing bowl to create a lampshade. In a workshop with ANSEP students last summer, the kids got very creative. They grew Frisbees, hot-drink coasters, winter boot inserts, even a thermos shaped like the 1-Up Mushroom from the Super Mario video game. 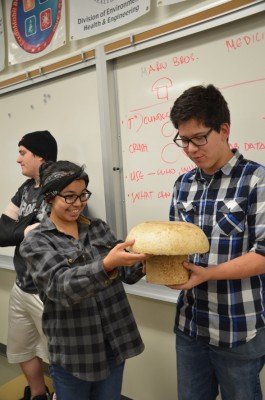 The research team, which includes two others-civil engineering professor Joey Yang, responsible for all kinds of thermal, strength and quality tests, and Maria White, an undergraduate chemistry major who answered an ad for a student worker-is not the first to grow insulation from mycelium. In one of two papers headed to academic journals, the UAA team summarizes work at other universities where researchers developed a similar "biofoam" by feeding mycelium rice husks, wheat grain and cotton plants.

What's special about UAA's effort, Amstislavski says, is that the fungus from which the mycelium comes is local, it grows fast and can thrive in cold temperatures. It is the essence of a renewable resource for Alaska. It also bypasses all the environmental and health hazards of traditional insulation materials. It is completely nontoxic. And, it has high R-value on par with the blue board insulation you can buy at Home Depot. Eventually this mycelium-based insulation could be used anywhere conventional plastic insulation is used now.

Now here's something very weird. The insulation can be used dry (dead, after being baked in an oven) or while still alive. If it is still living, the insulation can "self-heal." Imagine a slab of living mycelium-based insulation layered under a roadway. If a road crew punctures the insulation, the mycelium network will grow back together. Cue curious Alice again.

So what's next? The goal of Innovate grants is to help scientists make enough headway on an idea to interest bigger funders, such as the NIH, NSF or USDA. In fact, between teaching in the public health master's program, Amstislavski will be busy applying for more funding to continue the work.

He envisions mycelium-based insulation products manufactured right in Alaska. Because the product is so resilient and tolerant, insulation for a building project could be grown right at a construction site. We're talking a week till harvest. 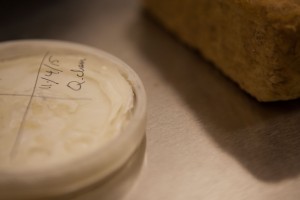 Mycelium culture used to "grow" insulation with R value comparable to the blue board available at hardware stores. (Photo by Phil Hall / University of Alaska Anchorage)

Amstislavski was born in Russia to parents who were research biologists in the old Soviet Union. They chose to work in the polar Urals, where they could do their research and learn from and about the indigenous peoples of Arctic Russia. As a boy he remembers joining his father on polar expeditions to study salmon migratory patterns. The "Northern bug" bit him at an early age, he says.

His path to UAA was hardly direct. He earned an undergraduate nursing degree from a Moscow college, his first master's in architecture in New York, a second master's in environmental management from Yale, and his doctorate in earth and environmental science from CUNY. In New York, he dreamed of moving back to the North; in 2013, he chose Alaska. 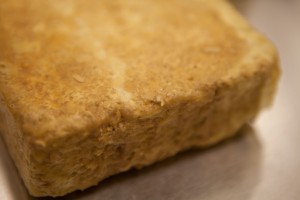 The patent he and his team are about to earn for their insulation recipe won't be the first in his family. His scientist mother, Tatyana Amstislavskaya, has patents from 1990 for a clear, callogen-based eye "band aid" that can hold an eye wound closed while the patient sees through the transparent patch.

Though his family moved to Israel after the fall of the Iron Curtain in 1990, Tatyana was still working for the Soviet Union in 1986 when Bausch & Lomb flew her to the United States and eventually bought the rights to her invention. The resulting income went to the Soviet Union, not to his mother.

Still, her American visit was a thrill to hear about, Amstislavski said, "just about like going to the moon!"

And as fate would have it, now he lives here.

A version of this story by Kathleen McCoy appeared in the Alaska Dispatch News on Sunday, Jan. 31, 2016.

"Growing insulation from nature" is licensed under a Creative Commons Attribution-NonCommercial 4.0 International License.