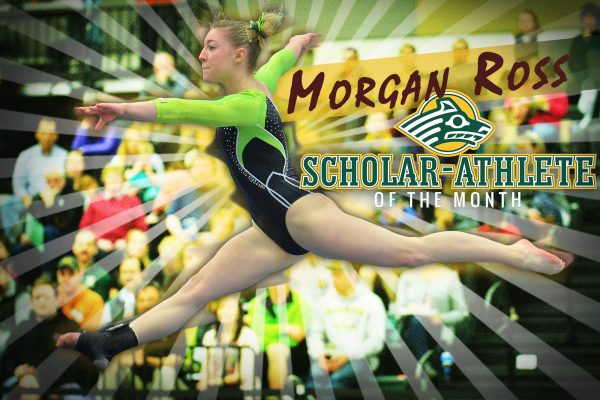 Morgan Ross is clearly dedicated, whether she's involved in academics, athletics, student life or the community (spoiler: she's active in all four). Need proof? This year's Seawolf gymnastics captain is also a double-major member in the Honors College, and former manager of UAA's student-run coffee shop.

Despite her full schedule, she's still effective across the board. "If I'm doing something, I'm doing it 100 percent," she said of her approach.

Her coach, Paul Stoklos, took notice of Morgan's drive and promoted her to team captain this year, offering this former walk-on athlete a full scholarship. "She's a good student," Paul said of Morgan. "She wants to be successful and that's the kind of athlete that we like to have."

A naturally hard-working person, UAA has allowed Morgan to channel her energies beyond athletics and academics and into service work and community engagement as well.

High marks for the gymnastics team

Morgan arrived in Anchorage from Reno, Nev., with a jump-start on graduation-thanks to heaps of high school AP courses, she could have finished college in three years. She originally planned to major in environment and society with a minor in Spanish, but that changed when, thanks to those AP classes, she enrolled in Patricia Fagan's 200-level Spanish course as a freshman.

"I love her. She's awesome," Morgan smiled. Dr. Fagan encouraged Morgan to take advantage of her scheduling freedom. She could graduate in three years, but was planning to compete for four, so why not tack on a second major in Spanish? So she did.

Double majoring as an athlete may sound daunting, but it's nothing out of the ordinary for the UAA gymnastics team. Last year, the team recorded a cumulative 3.64 GPA (including three athletes with a 4.0), placing it 7th academically of the nation's 82 collegiate women's gymnastics teams.

It's a bright bunch and, as captain, Morgan gets to lead by example, balancing academics and athletics and making sure her teammates do the same. "I try to be a level head in the gym," she noted. "If we come in and everyone is just dead, I try to pick it up and make sure we don't have those days." Thankfully, as a naturally enthusiastic person, that's not hard. "Everyone has their chance to lead and have their voice, and I just help structure it."

"She's an excellent leader," Stoklos said of Morgan. "She's motivated for the team to do well and for herself to do well. Those are all really exciting things to have." 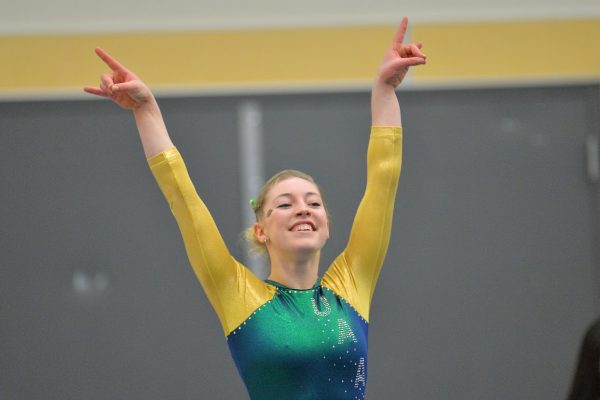 Morgan, majoring in both Spanish and environment and society, leads this year's gymnastics team. (Photo by Sam Wasson / UAA Athletics)

Aside from liaising between the coaches and the team, Morgan's captain responsibilities also include organizing the team's service projects. Service is not required of NCAA teams, but UAA Athletics certainly supports it. "We want to be out in the community helping people as much as possible," Morgan said. 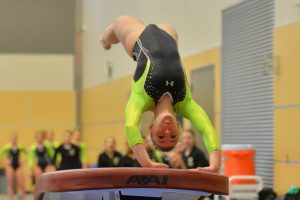 Last year's gymnasts set a service record for the team, surpassing their 700-hour goal. So, this year, they bumped the goal to 800.

The team is already well on its way. For example, on one September weekend, half the gymnasts headed to the Alaska State Fair to perform vision screenings on behalf of Benton Bay Lion's Club, while half provided courtside support during the volleyball team's SpringHill Suites Invitational. Later this year, they'll assist a breast cancer walk and a Special Olympics bowling tournament.

So far, the 15-member team has logged an impressive 447 volunteer hours this school year-halfway to its goal. But rumor has it the 47-member track team is shooting for 1,000 hours this year. "Now it's on," Morgan said. "It's a competition."

And that's fine with Coach. "They're competitive that way," Stoklos said of his team's volunteer goals.

A community of support

But Morgan doesn't just volunteer to rack up hours. She finds genuine value in connecting with the community and, as a junior, her courses provide those opportunities too.

Her classes this semester cover Spanish cinema, environmental sociology and-in a perfect blend of her interests-an Honors College class on sociology of sports ("it just so happens my favorite teacher [Chad Farell] was teaching something I'm super-interested in," she laughed).

But several of her classes prioritize active engagement off campus. There's environmental planning, where she and her classmates advise an actual city project. Then there's civic engagement, which includes weekly late-night tutoring roles at Chester Creek Elementary. On top of that, she still works a few hours a week with Focus, an Eagle River non-profit for residents with special needs.

For Morgan, these projects are added opportunities-part of a wider web of support she didn't expect to find in interconnected Anchorage. 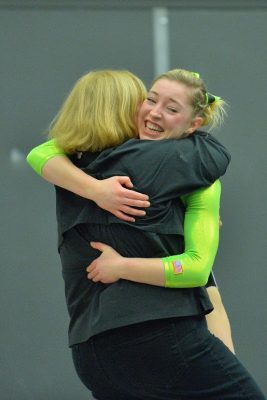 Good news for her junior season: three of the team's away meets are within driving distance of Morgan's family in Reno. (Photo by Sam Wasson / UAA Athletics)

"Learning about my resources was a really interesting advancement that I had in the last year," she said. "Once you start exploring more, once you have that one link, it opens up this whole world."

Morgan-who plans to stay in school, pursuing advanced degrees as long as she can-is glad she went after the adventure of an education in Alaska.

"I'm so much more connected at UAA than I ever thought I'd be. I know so many people that I never thought I would know," she laughed. "I feel like I have a huge support system here, as an individual and for the team."

That support system is, in part, thanks to her magnetic positivity, die-hard dedication, her eccentric cheerfulness and her natural leadership.

"You're born a leader or you're not," added Coach Stoklos. "I think the best [leaders] are naturals ... Morgan is somebody who's like that."