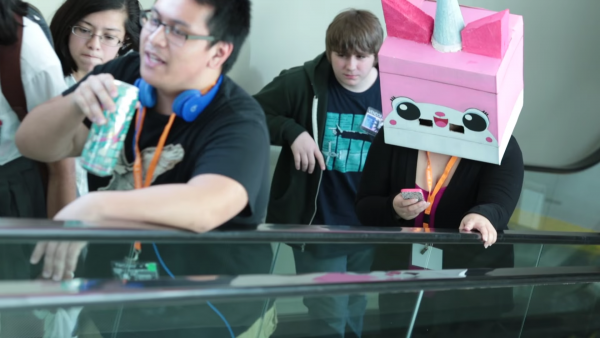 Just another day at Senshi Con. (Screenshot from YouTube, courtesy of Senshi Con)

Costumes and capes filled the streets of downtown Anchorage this month for another edition of Senshi Con, the city's annual festival of Asian culture and entertainment. To the untrained eye, the costumed crowd could be mistaken for an overzealous group of impatient Halloween enthusiasts. But, given the growing popularity and press around Senshi Con, it's harder and harder to miss the legions of superfans nerding out at the two-day family-friendly festival.

Like Godzilla, Senshi Con is a powerful force that returns larger and stronger than last time. The event has grown significantly since its UAA days (from 2006-2013, UAA students hosted the event in the Student Union). In 2014, the con moved to the downtown Egan Center-all 50,000+ square feet-and this year, the magic gathering grew again, stretching down the street to event spaces at the Anchorage Hilton. 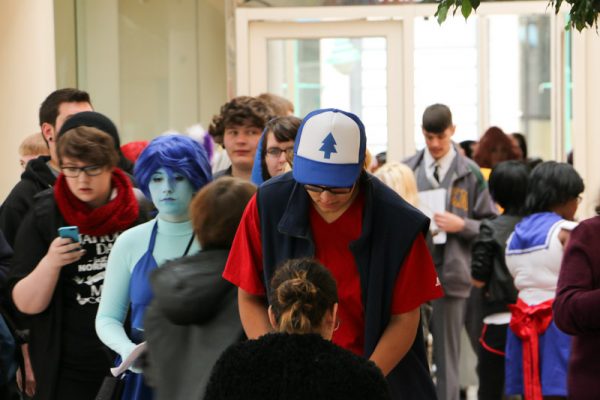 Since the event moved from UAA to the Egan Center, Senshi Con lines frequently stretch around the block. (Photo courtesy of Senshi Con)

Yes, like that famed mutant lizard, Senshi Con is also capable of taking over entire blocks of downtown. Need proof? The 2015 con (short for convention) drew more than 4,000 people; Visit Anchorage estimated an economic impact of $191,000 across the city's hotels, restaurants and among the con's hundreds of vendors.

Clearly, Senshi Con is no longer just a few friends in the Student Union. Like its original founders, Senshi Con has graduated from UAA and stepped up to bigger stages, becoming an annual economic and entertainment juggernaut. 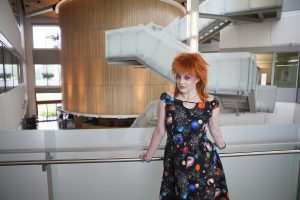 Kira Buckland, seen here before a David Bowie show at the UAA Planetarium, is now an anime voice actress in Los Angeles. (Photo by Phil Hall / University of Alaska Anchorage)

The inaugural convention was a much simpler affair, held on a Friday afternoon in the cafeteria of West High School. Kira Buckland-president of the school's anime club at the time-was well aware of the growing con calendar and burgeoning nerd culture in the Lower 48. But, due to both distance and her teenage travel budget, there was no way to reach those events. So she started her own.

The inaugural event's broad program-wasabi-sampling, karaoke and Dance Dance Revolution-provided a glimpse of the diverse event the conference would become.

When Kira graduated from West High and moved on to UAA, the conference came with her. After helping found the UAA Anime Club, she was now connected to a broader network of anime super-fans for the second Senshi-Con. Kira, who graduated with a degree in Japanese languages in 2007, has since relocated to the Los Angeles area, but the con lived on (today, nearly 30 people volunteer their time practically year-round to plan the event). Kira still returns to Alaska to join the fun, though, which is good for her and for the con. After all, she's now a professional anime voice actress with 16,000 Twitter followers.

More powerful than a locomotive 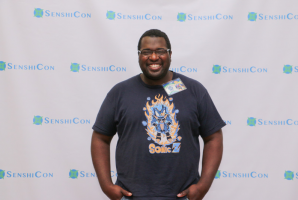 Braxton Bundick, a 2010 culinary arts grad, has helmed the conference through its exploding growth. As a student, he was also involved in founding the UAA Anime Club, and he's served as con director since 2011. During his time at the wheel, Senshi Con expanded to two days ("24 hours was not enough," he noted) and the event made the jump downtown.

After eight cozy years in the UAA Student Union, the Egan Center provides more room for dancing, battling and especially dance-battling. The program has grown to match (though organizers still hold planning meetings in the Student Union leading up to the event). 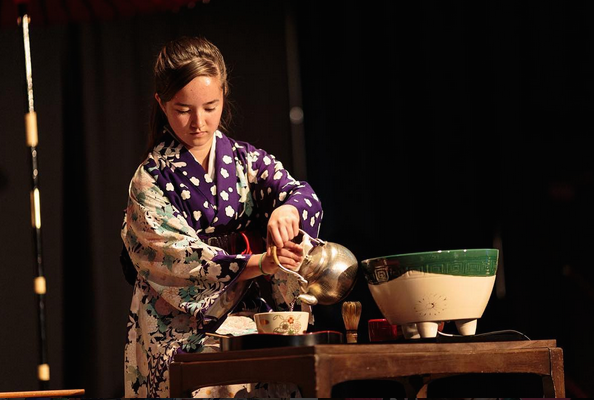 A Japanese Tea ceremony performance from the 2013 Senshi Con. (Photo via instagram.com/senshicon)

Senshi Con is visibly-but not exclusively-obsessed with anime. Since the start, the event has celebrated both East Asia's pop culture and traditional culture. For example, people may trade Yu-Gi-Oh cards in one booth, while next-door kimono-clad tea masters artfully present bowls of green matcha in a centuries-old ceremony. It's a large reason UAA's Japanese club-Nihon Bunka-has been involved in past cons.

Similarly, the event has developed into a celebration of anything you could obsess over, no matter the country of origin. "It's become more of a fandom convention," Braxton explained. Want to dress like a Disney princess? Bring your tiara. Do you make medieval chainmail in your spare time? Register for a vendor booth. Never seen Dragon Ball Z but can't stop quoting Dr. Who? Hop in your Tardis and head to Senshi Con.

Who knows what the future holds for Senshi Con (though a good guess is more growth). The event gained momentum in a UAA incubator, and is still led by several UAA grads, but it's moved far beyond its original scope. Now, it's an inclusive super-fan community for the entire state.

So mark your calendars for 2017 to see what happens next. "The people make it what it is," Braxton noted.