Chinese scholars immerse themselves in collaborations, classes at UAA

Imagine what it would be like to spend a year earning a master's degree in one country and then, in another year, another country, earn a Master of Business Administration degree. 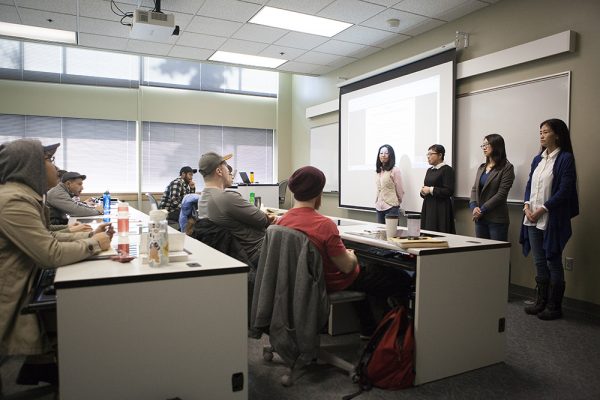 A group of Chinese professors are getting a taste of what it's like to study, collaborate and share their insights with people in the U.S.  The four scholars are here at UAA, in residence, to deepen their respective research into the fields of experimental economics, logistics and finance.

One of those women, Jiyu "Tracy" Wang, Jilin University of Finance and Economics (JUFE) has been working with Professor Qiujie "Angie" Zheng, co-chair of UAA College of Business and Public Policy's International Programs Committee and Professor Bogdan Hoanca, director of graduate programs, to develop an joint graduate 1+1 partnership between the two universities. Wang is about to end a 14-month stay. 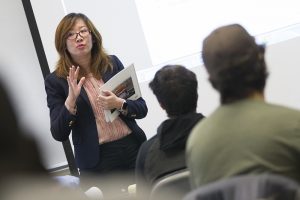 The joint master's program is similar to a 1+1 partnership UAA built with Nankai University.

The other three women are here to collaborate with faculty and take part in an assortment of finance and economics classes, though not as formal 1+1 partnership participants. Xu "Sissi" Dai, an associate professor and postgraduate supervisor in JUFE's college of finance, will conclude her year of study in August. Arriving in January for two-month stays, Yunzhe "Karen" Liu and Weiyang "Cynthia" Diao will return to China on March 9. 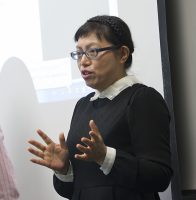 Xu "Sissi" Dai holds a finance master's degree and a Ph.D. in economics, in addition to being a researcher of JUFE's Research Institute of Rural Finance.

She worked for the Industrial & Commercial Bank of China's Changchun municipal branch, in its international business department, for more than seven years before working in the Jilin provincial branch of the bank as an internal auditor. She returned to the university in November 2011; she has been a lecturer for 16 years.

"My parents are both doctors," she said of the beginning of her academic career. "The problem is, I'm very scared of blood. So I had to give it up [a medical career]. I'm really interested in children's education and Chinese literature, but my parents said if I want to find a good job in the near future, I should work in a commercial bank. In China, most students of my age may follow their parents' direction, advice, on selecting majors or universities. This is why I finally selected the major of finance."

At the beginning, Dai "had no idea about finance. I just knew finance was closely related to supplying the splendid buildings of commercial banks. I had never heard of securities companies or insurance companies. After I've learned some knowledge about finance, I'm interested in it, especially international settlement and foreign exchange transactions." 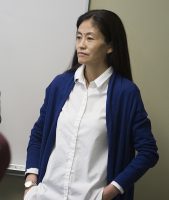 Professor Jiyu "Tracy" Wang of Jilin University of Finance and Economics has helped develop a 1+1 graduate partnership between JUFE and UAA. (Photo by Philip Hall / University of Alaska Anchorage)

In addition to attending classes, she has been collaborating with UAA Professor John Nofsinger.

"I'd written many emails with Dr. Nofsinger," she said. "He's a famous professor in the field of corporate finance and behavioral finance, so I was considering whether we can start cooperative research together."

Nofsinger asked if Dai would be interested in helping write a literature review for one chapter in his book.

And, Dai is also collaborating with UAA Professor Ajit Dayanandan on an academic article on the comparison between Chinese and Indian treasury securities markets.

"In the future, I would try to invite some finance professors to my university to improve the academic level of both of us," she said.

Collaborating to make an impact 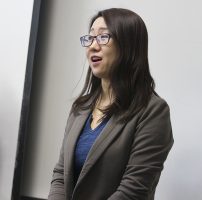 Wang and Liu are economics professors, while Diao is interested in logistics.

"I love [Professor Darren Prokop's] lectures, very enthusiastic, and I like his passion in the lectures," she said. "One of his research papers is about Anchorage as the international logistics gateway to Canada, so I think I'm going to propose a project about this."

In Jilin Province, Diao said, there's a city that's not as large as Anchorage, "but it has the same function, some of the same geographical position in our province. It is the gateway to both Russia and North Korea. I want to make a comparison of Anchorage and that city, Hunchun."

Prokop says Diao has actively participated in his classes.

"She's fascinated and interested in discussions of international trade and transportation, and how important Alaska is to that," he said. "That seems to be a revelation to her. It's an important piece of Alaska's position in the world. It's not discussed in the textbooks so she's getting an accurate and customized view of things. Anchorage has not only a geographic advantage but an operational advantage that has yet to be fully exploited. It could someday be a hub like Memphis is for FedEx. "

He says his goal is to help logistics students become aware of emerging trends and think strategically-imagining what will be happening and needed here 10, 20, 50 years into the future.

Prokop said Wang, too, has been engaged in his classes.

"Tracy's been very good in looking at my new books and is interested in taking them back to China with her and having them translated," he said, "especially my book on transportation economics that was published last year. We'd love to see it available in the Chinese language and used there. It's great not only to see the students coming here and learning about international trade, but using scholarly output-seeing UAA as a place to get some of the latest thinking and scholarship and use it in their own classrooms in China."

Wang and Liu both are engaged in the field of experimental economics. 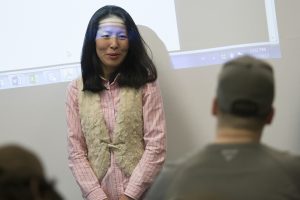 "We designed everything," Zheng said of the student visits. "We visited Chinese universities, companies and U.S. company branches in China."

Johnson and Wang have developed a pilot international trade classroom economics experiment using a popular messaging cell-phone app, WeChat; Wang is helping test that app with Chinese students. "Using WeChat to run classroom experiments in China avoids the problem of trying to use the Internet to access online experiments, because a lot of Internet access is blocked in China," Johnson said. "Facebook and Google are blocked in China. It's very frustrating."

"Chinese scholars immerse themselves in collaborations, classes at UAA" is licensed under a Creative Commons Attribution-NonCommercial 4.0 International License.