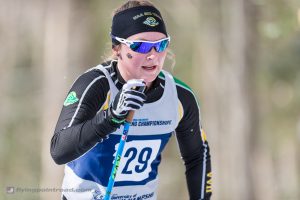 Nordic skier Casey Wright competes for both UAA and the Australian national team. Good thing they have the same team colors. (Photo from flyingpointroad.com)

As a sophomore on UAA's Nordic team, Casey Wright leads the 'Skiwolves' in classic skiing. And as a member of Australia's national ski program, she represents her homeland at international competitions like the Junior World Championships in Utah and the Asian Winter Games in Japan (and maybe, just maybe, next year's Winter Olympics, too).

On top of that, she's also a UAA student.

Imagine keeping tabs on epidemiology class in one time zone while competing for your country in another. "I had a little bit of a panic one night that I was behind," she laughed of her experience submitting homework from Japan.

Good thing both Australia and UAA have the same official colors. Despite her schedule, she's turned out impressive results for both teams.

Casey finished 35th in the classical race at the 2016 NCAA nationals, but jumped to 14th this season. At the Asian Games in February, she finished third in classic sprint. And through it all, she's maintained a 4.0 GPA in health sciences.

For a Southern Hemisphere skier like Casey, a topsy-turvy schedule is commonplace. When it's summer in Australia, it's winter up here. She once experienced nine winters in a row just by following the snow.

Casey grew up in Melbourne, skiing the city's surrounding hills with her family. By high school, she was training and competing in the Australian Alps, the region's main competition mountains, more than four hours away.

"It was pretty chaotic," she said. "During school holidays, any time we had a break of a week or two, we'd be up on the snow."

But a four-hour drive seems paltry now that she's skiing 7,000 miles from home. But the ski scene in Australia is admittedly small, and Casey has gotten a kick out of competing in North America. "I'm amazed at how many people come to races," she laughed. 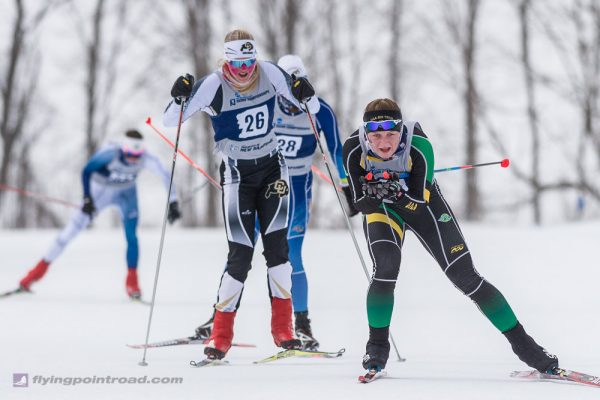 Despite her busy travel schedule - including the NCAA nationals in New Hampshire this March - Casey has maintained a 4.0 GPA as a health sciences major. (Image from flyingpointroad.com)

Casey arrived in Anchorage midway through last school year and immediately launched into the student-athlete life, with a full slate of courses and a schedule packed with training.

She declared a major in health sciences, similar to what she'd been studying at a university in Australia.

Likewise, her athletic background adds to her perspective. "It helps being an athlete because I can relate a lot of the stuff I learn back to myself," she said. "That's always interested me."

Her professors have largely accommodated her extreme schedule, but she recognizes that several weeks of absences can be a challenge for both sides.

"The biggest factor is having professors who are willing to work with you," she said. "It's always hard on the first day of classes, going up to professors saying, 'Hey, I'm going to be missing a lot of classes' and they ask, 'More than three?'"

But her academic achievements - like that 4.0 GPA - let her professors know she's serious.

Eyes on the Olympics

That hard work extends to the ski hill, too.

"She's very much a team leader," said Nordic coach Andrew Kastning. Even though she's a sophomore, Casey is already one of the oldest members of the Nordic team (all 10 Nordies have two more years of competition ahead).

Kastning sees her as a contender with legitimate potential at an NCAA podium, noting that she jumped 10 to 15 places in nearly every race this year. "A lot has to come together for that to happen, but I think it's a very reasonable expectation and goal for her to reach next year." That level of success could qualify her for the Winter Olympics next.

Casey is optimistic about the team's future. "We're a super-close team, one of the closest teams I've been a part of," she said, adding that this year's results were "really promising to what we can achieve - hopefully, we can keep building that every season."

But, for the immediate future, she's most excited about sunshine. Switching hemispheres undoubtedly boosted her skiing career, but it also meant she completely skipped out on summers. As any Alaskan knows, that's unacceptable.

"Last summer was actually my first summer in five years," she said with a laugh. "I'm a little bit hooked on the concept of summer now." 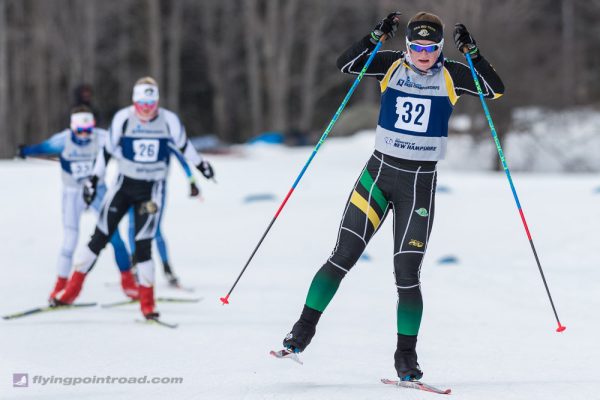