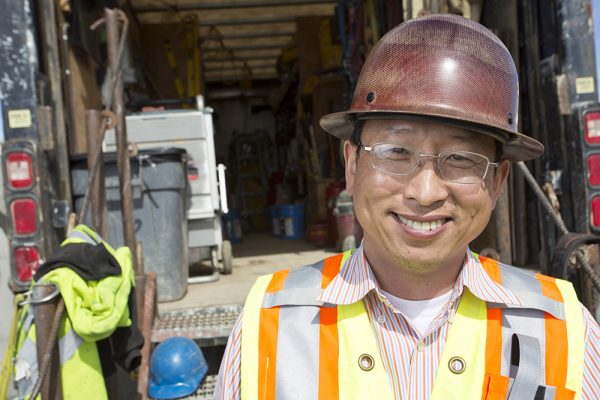 Back when Chong Kim was a child growing up in Taean, South Korea, he dreamed of building a robot to fight bad guys. That early interest in engineering grew into a passion that brought him to UAA, where he graduated in 2000 with a bachelor's degree in civil engineering.

He then moved into a position with the Alaska Department of Transportation & Public Facilities, where he now serves as a project engineer. Chong has overseen road transformations at the intersections of Tudor and Elmore in 2009 and Tudor and Lake Otis in 2010, and he supervised the 2012 reconstruction of the Seward Highway from Dowling to Tudor, which widened the highway, improved frontage roads to include multiuse trails, and replaced four bridges over Campbell Creek.

Now, Chong is the state DOT engineer presiding over the 2017-2019 Dimond-to-Dowling phase of the Seward Highway reconstruction, which aims to relieve traffic congestion in the Dimond-Abbott area. The project is replacing Little Campbell Creek fish-passage culverts that cross under the highway in two locations; preparing frontage roads to temporarily serve as highway detours; extending Sandlewood Drive to Lore, to serve as an alternate access to Brayton Drive businesses; widening the highway from four to six lanes between Dimond Boulevard and Dowling Road; creating a bridge over a newly linked Lore Road-76th Avenue; and, once the highway construction is finished, installing sidewalks and making other improvements to the Brayton Drive and Homer Drive frontage roads. We talked with Chong about his life and work:

What prompted you to leave South Korea and move to the U.S.?

My oldest sister lived here with her family - she got a job with ARCO as a mechanical engineer back in the early 1990s and her husband was an attorney for a Native corporation. I came here as an international student in 1994 because of her.

What aspect of engineering do you find engaging?

Idea becomes reality - building and creating something for people to use.

Why did you decide to attend UAA, and what was your experience like?

UAA was the only choice; it had the only civil engineering program at that time. I was not good at it, but steel and concrete design was a bit more interesting. I was a shy, lack-of-English guy who mostly hung out with close friends and family and mostly worked on odd jobs until I interned with the DOT/PF Construction Section. College buddies talked about the work they did during the summer. I went with one friend who worked as an intern with the Department a year prior - he's my project manager now. I wanted to get into the public work, so it worked out.

What challenges did you face during your years at UAA?

English is my second language, so the oral and written communications were my biggest challenges. Engineering courses were tough, too!

What was the best, most fulfilling aspect of being in college?

Walking around the campus with thick engineering textbooks. I was just happy and thankful I was granted a chance to go to college in the States.

Sorry, I was barely making all the classes. I did not have time to do or think about others - I was just busy trying to keep up.

What was your career goal, back when you were still a student here?

What did you expect your time at UAA would be like, before you arrived?

I had no idea what I was getting into.

How did you transition from UAA into your career?

After the internship, the DOT management informed me to apply for the job. My job was secured before I graduated - the graduation ceremony was on Sunday, May 7, and my first day of work was May 8, 2000.

Who in the local engineering community has mentored you, either in or after college?

Randy Kinney was one of our engineering instructors and he mentioned a lot about transportation industries. Also, my senior project engineers inspired me at work.

What have been the greatest challenges of the work you do for DOT?

The biggest challenge is dealing with unknowns - weather issues, natural disasters, accidents - and angry people who are unreasonable.

What projects are ahead for you?

If I can successfully complete this project, I would love the challenges of the third phase of Seward Highway's reconstruction, O'Malley to Dimond. Then I will have worked on all three phases of the projects, from O'Malley to Tudor.

We're creating something out of thin air, making it happen. After we build it, the joy is that I drive on it and everybody else drives on it - my wife uses it, my kids use it, everybody else uses it. Every single day I drive on the roads that I touched, for the past 17 years - Tudor Road, Seward Highway, Benson, Elmore Road, Dimond Boulevard. Anywhere you go, I worked on it. It's rewarding.

"UAA civil engineering alumnus: 'We’re creating something out of thin air, making it happen'" is licensed under a Creative Commons Attribution-NonCommercial 4.0 International License.