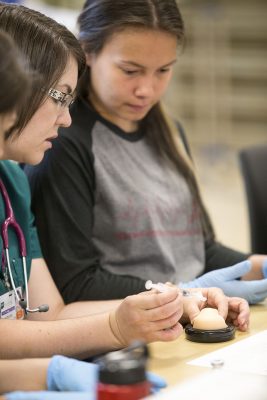 She's lived all over Alaska - Barrow, Metlakatla, Dutch Harbor, Anchorage - and plans to travel to the Lower 48 to begin her college career.

But what Camryn LeClair wants most is to live in one place: the East High graduate's long-view plan is to earn a nursing degree and settle among family in the Bristol Bay region.

"A lot of my mom's family is from Manakotak, which is a little village off of Dillingham - it's like a 15-minute airplane ride over there," she said. "They don't have a hospital; they just have a little clinic. I want to be a nurse, come back, work in my community and be able to give back to all my family that's there."

Camryn recently engaged in the UAA Recruitment and Retention of Alaska Natives into Nursing (RRANN) program's weeklong day camp, which gives teens interested in nursing a taste of what the profession is like.

These 17 aspiring nurses found a warm welcome at RRANN, and even saw a familiar face or two. 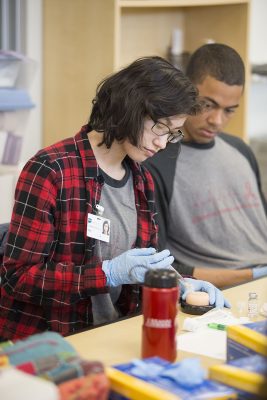 The idea first germinated nearly three decades before, after DeLapp moved to Alaska with her new husband - a U.S. Public Health Service engineer - and started working as a registered nurse at Bethel's hospital.

"One of the first things I noticed was that there were no Alaska Native RNs, despite the fact that the hospital clients were almost 100 percent Alaska Native," the former UAA School of Nursing director said. "There were two licensed practical nurses of Alaska Native origin and all of the nursing assistants were Alaska Native, but none of the professional staff - nurses, physicians, dentists, pharmacists, social workers - were Alaska Native. Even though I noticed the lack of Native providers, I don't think I really thought it was any big deal."

DeLapp learned otherwise. Not knowing the culture of the people coming in for care diminishes the ability of a doctor or nurse to administer the most effective care possible, she said. 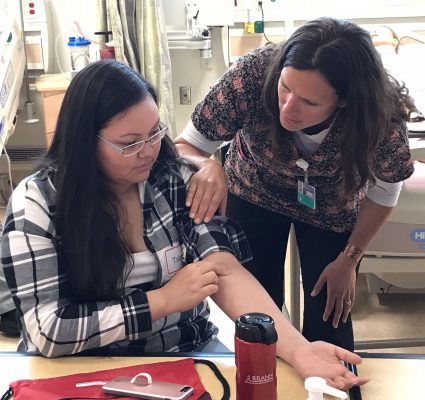 One of the things DeLapp learned in Bethel was that Yupik patients often said 'yes' by raising their eyebrows, without speaking. Health care providers who didn't know this might not realize a patient needs help.

"If you asked someone if they were in pain and they put their eyebrows up, you could tell them, 'Let me see what I can do,'" she said.

DeLapp also realized there are many Alaska Native cultures and many nuances within each of those cultures.

"I remember being totally shocked when I asked one of the nursing assistants to explain to a patient who spoke only Yupik that they were supposed to take one pill twice a day," DeLapp said. "She said, 'I can't. She speaks a different dialect.' There were lots of issues like that."

Eight years later, DeLapp joined the nursing faculty in Anchorage and saw that only an occasional Alaska Native student completed the program. 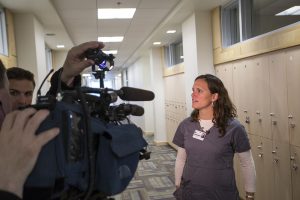 "The idea that we ought to be doing something was pretty clear to me by the time I'd been teaching in the School of Nursing for four or five years," DeLapp said. "I would get a student from rural Alaska in my pathophysiology class who was confident, enthusiastic and interested in nursing, from a tiny school where she was the only person in the upper half of her graduating class. In that sort of environment, with just four or five classmates, they're going to look confused if they don't understand something. The teacher will ask what they can help with. They don't have to learn to ask for help."

In nursing school, DeLapp said, that student would enroll in an 80-student pathophysiology class and not know how to ask for help. She'd come to campus and live in a place with so many more people than at home. She wouldn't know anybody and get unbearably lonely.

"At three weeks or six weeks, she'd give up and go home," DeLapp said, "but she wouldn't know the bureaucracy, wouldn't know that if you don't withdraw, you get a transcript full of F's and have to start repaying student loans in exchange for getting your confidence shattered. It took nearly 20 more years before I was in a position to do anything about it, which is when RRANN started."

On the first day of camp, the teens gathered around a table situated in a large Health Sciences Building nursing classroom. RRANN's director, Annette Rearden, talked the RRANN campers through assembling new stethoscopes the program purchased for them: "They're like the yellow #2 pencil: very basic, but they get the job done," Sanderlin noted of the stethoscopes. 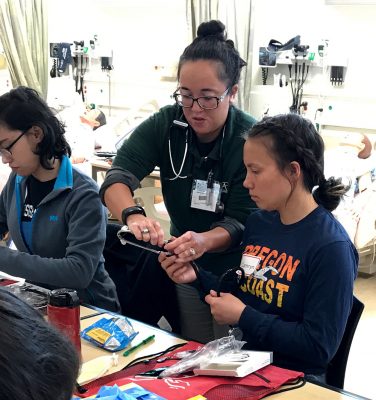 "There are multiple earpieces; you can try the earpieces, see which is more comfortable," Rearden said, as the students worked on their stethoscopes. "These are for you to keep. You can bring them home to practice on your pets and family - dogs are really good."

"Home" for some of these students is Anchorage or the Valley. Others, however, hail from Bethel and Southeast, Sanderlin said.

On the lab days, former and current UAA RRANN students assisted the campers and had lunch with them.

"That networking is our number-one value - providing a place for people to make relationships and bonds," Sanderlin said, noting that 80 percent of RRANN graduates stay in Alaska and will likely (because the state's nursing population is so small) work with people they went to school with.

"The human interaction, that is what keeps nursing from being a cold science," Sanderlin added. "It's what makes nursing, nursing. It's why robots will never replace people in nursing."

"Many of them have grown up in cultures and customs that most of America hasn't experienced," she said. "Those languages and customs only strengthen their role as nurses. They sing to patients. They speak to patients in their language."

Sanderlin says RRANN's Annette Rearden is looking at the possibility of hosting the camp in other places, starting with Bethel. "There are no solid details yet," Sanderlin said, "other than the fact that we're planning one."

Shea Bartolaba just graduated from Yaakoosge Daakahidi Alternative High School in Juneau and volunteered as a housekeeper for the Aiding Women in Abuse and Rape Emergencies (AWARE) shelter.

"I love caring for people and making sure they know their resources," said Shea, who plans to attend University of Alaska Southeast this fall, "and I really enjoy learning about anatomy and biology, so I thought nursing would be a great combination."

Shea learned about the camp from RRANN's Rebecca Dreier, who visited Shea's high school and gave a presentation about it.

"What I liked most about the camp was how it covered a lot of ground and gave us a bit of experience with basic skills," she said. "The simulation lab was the most interesting, since it gave us a realistic look inside a typical day with a patient. I feel this camp really gave me a level a bit above other students, as I already have knowledge of the basics. It'll make classes easier for me to build on."

Camryn LeClair's interest in nursing grew because people in her family struggled with health problems - "One of my grandparents passed away from cancer; I think that just kind of inspired me."

An Indian education community counselor at East High then told her about the RRANN camp.

"She was the one who actually grabbed the application and said, 'You should do this!' Camryn said.

Even though she had already toured the nursing program at UAA and visited the simulation lab, Camryn eagerly signed up.

"I've earned college credit for ETT, human anatomy and medical terminology classes, so I'm already kind of into [nursing]," she explained, laughing. "I'm just upping myself up a little more."