For relay runner, school and sports go hand in hand

When asked whether his schoolwork connects to his athletic training, Liam is quick to respond: "Absolutely." What he learns in class affects his performance on the track. What he learns in practice opens career ideas for the future. Like a clean baton handoff in a fast-paced relay, school and sports are seamlessly synced.

In addition, he's seen success on both sides of student-athlete life. Liam's a two-time All-American with a conference record in the 4x400m men's relay, he and his teammates finished fourth in the event at NCAA nationals this year, and he holds a 3.62 GPA in the classroom.

So what's his key to interdisciplinary success? "I think a big part of is it just enjoying what you're studying," he noted. 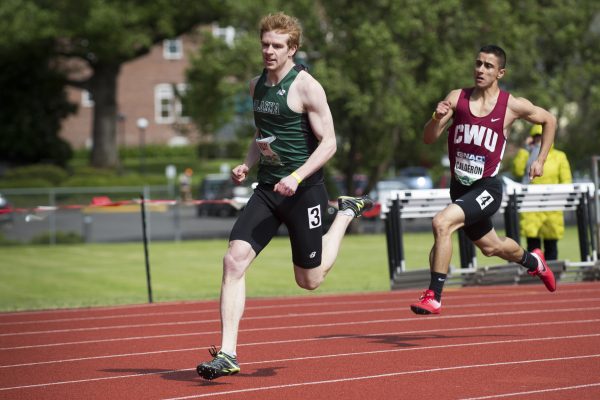 Student-athletes at UAA lead busy lives, but Liam was prepared. In high school in Duncan, British Columbia, he played soccer for both his school and a club team. Meanwhile, he also coached and competed in long jump, triple jump and sprints for a club track team. He's been balancing school and sports his whole life, and knew he wanted to continue in college.

Nearing graduation, Liam's coach recommended he check out UAA, where several other sprinters from Victoria Island had gone to compete in college (the big island off Canada's west coast has supplied UAA with nearly a dozen sprinters in just the last five seasons; it's the Kenya of short distances).

Thanks to his experience in high school, the transition to university life was simple. "It took a little bit of practice studying on the plane [and] studying in the airport," he joked of team road trips.

The big change was joining such a large team. His small track club in British Columbia could rarely field a four-man relay squad (his hometown of Duncan, at just 0.8 square miles, is the smallest city in Canada). Arriving at UAA, Liam saw the potential of the relay team and wanted in. Though he still competes in individual sprints like the 400m and 200 meters, the 4x400m relay has become his signature event.

And he has the records to prove it. In 2016, he helped set a school and conference record at the Husky Invitational in Seattle, completing the mile-long race in a blazing 3:12.45 alongside fellow Victoria Islanders Adam Commandeur and Nicholas Taylor, and future-national champion in the decathlon Cody Thomas. 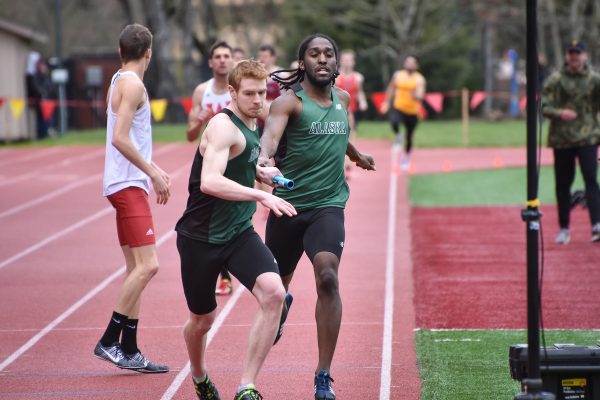 Darrion Gray hands off the baton to Liam at the Willamette Invitational in Salem, Ore. (Photo courtesy UAA Athletics)

Within UAA's physical education major, Liam's emphasis is fitness. He'd like to be an athletic trainer down the road, and will often drop by the Seawolves' training room to take mental notes for his future career.

The class - taught by adjunct professor Dr. Larry Levine, the medical director of the Alaska Spine Institute - was one half of a yearlong course on exercise science.

"I can say hands down that was the best class I have ever taken in my life," Liam said. "It was incredibly interesting and I learned a ton." 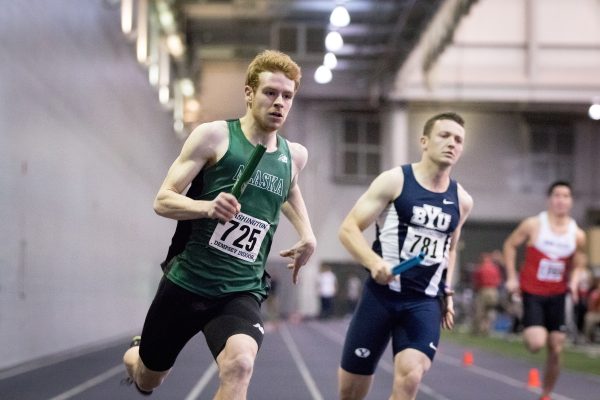 "I'm really glad I was able to go throughout university while also doing something that I love," said Liam. (Photo courtesy UAA Athletics)

Not too early for nostalgia

In a few weeks, Liam will be back on campus to start another year of upper-level physical education classes. For the program's degree-required internship, he plans to join a physical therapy clinic. Once he graduates, he hopes to work in physical therapy long-term.

On the track, he's aiming to shave a few milliseconds off his individual 400-meter record, finishing below 48 seconds for the first time in his career. And on a team note, he's ready to get the gang together for another run at the relay.

"I just have a blast doing that," he said of the 4x400. "There's something about running and knowing there are other people counting on you that really just makes you go."

But that's all in the future. For now, he's enjoying a relaxing summer back in British Columbia. Preseason starts in September and "as soon as January hits, it's go-go-go," he said. "We're pretty much gone two out of every three weekends."

Regardless, he's already reflective of his time at UAA.

"It is definitely something I'm going to look back on for the rest of my life," he said of studying physical education while competing for the Seawolves.

"I'm really glad I was able to go throughout university while also doing something that I love."

"For relay runner, school and sports go hand in hand" is licensed under a Creative Commons Attribution-NonCommercial 4.0 International License.