Qiujie "Angie" Zheng grew up in the coastal city of Tianjin, China, a place brimming with a rich selection of seafood. There, she could see tanks of live seafood stocked with all kinds of fish, ocean crab, lobster, shrimp - even turtles. Salmon was one of the fish she ate there, farmed Atlantic salmon. 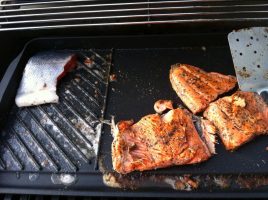 "I mostly tried them as raw or sashimi in restaurants in China," said Zheng, now a UAA College of Business and Public Policy professor. "I was OK with salmon, but never loved it. "

That changed when Zheng moved to Alaska in 2012 and tried wild Alaska salmon: "The texture and flavor of the taste are so different than the Atlantic salmon I tried before," she said. "It is so fresh and delicious." 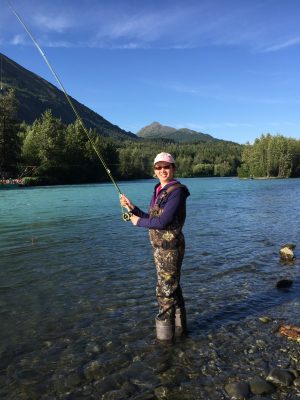 She bought Alaska salmon in supermarkets here, and decided to begin harvesting the beautiful chrome-scaled creatures herself.

"Over the years, I have learned some good fishing/dipnetting skills thanks to my friends," she said. "Now I have caught salmon by myself. I appreciated Alaska salmon even more after I started to catch them by myself, since every time I clearly know that I fish in a natural, pure and beautiful environment."

Two years after moving to Alaska, Zheng read an export news item stating that China, since 2011, has been Alaska's largest seafood export market in terms of tonnage and value.

"This report interested me because I never saw Alaska salmon displayed for sale in any of the supermarkets or wet markets I have been to in China," Zheng said. "Also, when my family and friends visited me from China, all of them commented on the great taste and high quality of Alaska salmon, and wish they could purchase it in China markets. These triggered me to think about surveying Chinese consumers, to investigate their preference for Alaska salmon and learn the potential of the product in China's markets."

And China has held that top spot ever since.

But approximately 80 to 90 percent of Alaska's seafood exports to China consist of frozen "headed-gutted" (H&G) fish, which are then filleted in China where labor costs are lower before being re-exported to Europe, the U.S. and Japan. A minuscule amount of Alaska salmon actually stays in China, according to the spring 2016 Alaska Seafood Export Market Analysis, compiled by the McDowell Group.

As a person familiar with both China and Alaska, Zheng noticed a topic she wanted to explore in depth.

"As a Chinese economist and Alaska resident, I see the big gap between supply of Alaska salmon products and demand for such products in China's market," she noted. "The growing Chinese demand for food and natural resources provides Alaska with potential for economic growth through expanded trade."

A rising middle class and concerns about food safety and contamination have driven up Chinese consumers' demand for food products sourced from a clean, safe environment. Also, that McDowell report from spring 2016 noted that 98 percent of key contracts surveyed in China see Alaska as "a source of premium seafood."

"Alaska salmon have potential to penetrate China's market," Zheng said. "Therefore, a better understanding of Chinese consumers' preference for salmon is particularly valuable and can provide guidance to Alaska's local fisheries and seafood firms in making business strategies in one of the most important international markets."

Zheng reached out to Dr. Holly Wang at Purdue University, a well-known scholar specializing in agricultural marketing and food safety research involving China's market. They then successfully applied for a UAA Innovate Award in 2015.

"Research funding provided by this award allowed us to carry out a large-scale consumer survey in multiple cities in China," Zheng said.

The researchers then invited Dr. Yonggang Lu, an expert on data analysis, to participate in the work "and help us crunch the data," Zheng said. Also, Dr. Quentin Fong at UAF provided insights as an experienced researcher on Alaska seafood market issues and the Alaska Seafood Marketing Institute shared research information.

They designed a survey that included questions on consumer purchase patterns and preferences for seafood, consumer salmon consumption habits and preference for salmon attributes, and consumer perceptions of and attitudes toward Alaska salmon.

Learning what, and how, Chinese eat

In each of those urban areas, the researchers selected nine representative big supermarkets (including Walmart) that had salmon for sale in their fresh-food department and teams of two students randomly selected shoppers to participate in their survey. They interviewed a total of 1,028 people, with 340 each in Beijing and Guangzhou and 348 in Shanghai.

Their findings: • Chinese consumers eat salmon less frequently than other kinds of seafood: while 38.8 percent eat seafood at least once a week, only 9.4 percent eat salmon that often, and 6.7 percent of the survey respondents hadn't ever eaten salmon at all.

• Sixty-five percent of consumers eat salmon raw, as sashimi or sushi: "This preference probably directly relates to the introduction of salmon to China through Japanese cuisine in the early days," the research noted.

• More than 83 percent of consumers eat seafood at least once a month, with 42.8 percent of them eating seafood between once a week and daily. The survey was administered to shoppers near the seafood section at supermarkets in large cities, so these statistics were expected to be higher than national or local averages. "However, these are the consumer segments we are interested in and will be the ones that have the greatest potential to be consumers of these products in the future," the research explained.

• Chinese consumers appreciate the health benefits of seafood. Sixty-six percent considered seafood more healthful than other foods and another 29.4 percent considered it about as healthful as other foods. Twenty-five percent had a strict preference for wild seafood, 11.2 percent had a strict preference for farm-raised seafood, and 39.7 percent buy both. Most significantly, 23.8 percent of the consumers either didn't pay attention or didn't understand the difference, "which may indicate a consumer segment that the Alaska seafood industry can target for future education on the benefits of consuming wild seafood."

• More than 64 percent of the fish purchased by consumers were live fish in water; 22.7 percent were chilled fish; and 13.3 percent were frozen fish.

• Nearly three-fourths of the people surveyed eat whole fish most often: "In Chinese food culture, fish is considered a symbol of abundance and prosperity," the research noted. "It is especially critical to have fish on the dinner table during festivals and celebrations. At banquets, it is customary to serve the entire fish, presenting it with the head pointing toward the honored guest." The next most preferred fish parts are boneless fillet, bone-in steak/chunk, and fish heads, which "indicates those products should be preferred when Alaska salmon is exported to China. It is especially valuable information to Alaska fish processors that fish heads are a very popular product among Chinese consumers."

• U.S. and Chinese consumers eat different parts of fish. In the U.S., most people who eat salmon eat only the fillet. Prices for other parts of a salmon are usually lower. In China, however, culinary traditions include cooking fish heads, tails, and bones for various soups and stews. "As a result, these seemingly low-value parts, considered waste to most U.S. consumers, can potentially carry significant economic value as seafood products to be exported to China," Zheng's research stated.

• Most of the respondents do know Alaska, partially because Alaska fish oil products have been popular in China for several decades.

• Younger consumers prefer dining on salmon in restaurants; older people are more likely to cook it at home.

Zheng snapped a photo in a Chinese supermarket of signs touting farm-raised Norwegian seafood, featuring vistas that easily could be mistaken for the coasts of Alaska.

"My first impression of seeing the picture was that this could be Alaska salmon on sale there," she said.