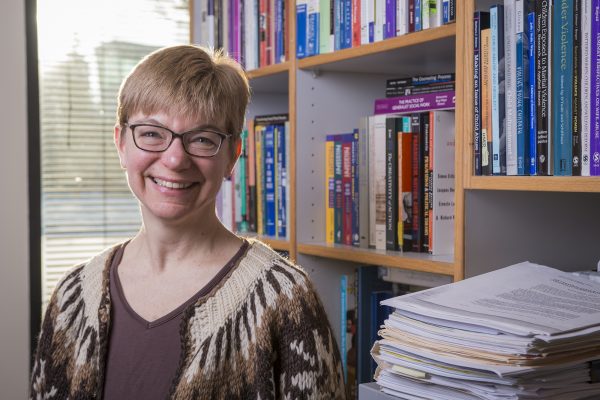 Tracey Burke, a professor in UAA's School of Social Work, was named a finalist for the 2017 Thomas Ehrlich Civically Engaged Faculty Award, for her career-long work in addressing social issues surrounding food security and poverty. She will speak on a panel with other finalists at the 2018 Campus Compact conference. (Photo by James Evans / University of Alaska Anchorage)

In Alaska, 102,670 residents, or 1 in 7 people, struggle with hunger. Of the 102,670, about 20 percent of those struggling to obtain a healthy meal each day are children, according to data collected from a 2016 Feeding America, Map the Meal Gap Report.

Tracey Burke, a professor in the School of Social Work at the University of Alaska Anchorage, has collaborated with Food Bank of Alaska and its partners for more than 10 years. While the heart of the partnership lies in a service-learning class, it also includes researching the impacts of food insecurity in Anchorage and across the state. This year, Burke presented her latest project, which focuses on the connection between food pantry nutrition and homelessness, during a two-minute segment at the Urban and Rural in Alaska Conference, held annually by UAA's Center for Community Engagement and Learning (CCEL).

Additionally, Burke's work received national praise when she was named a finalist for the 2017 Thomas Ehrlich Civically Engaged Faculty Award, for her career-long work in addressing social issues surrounding food security and poverty, service provision in rural Alaska as well as civic development and service learning.  She will speak on a panel with other finalists at the 2018 Campus Compact conference.

For Burke, her interest in civic engagement came through her work in Alaska while in the Jesuit Volunteer Corp. She spent two years in the program and her experience launched her lifelong interest in social work and community service.

Phase One: Providing the research

Catholic Social Services (CSS) reached out to Burke based on previous work she had done with the Food Bank of Alaska (FBA), a service partner of CSS, on helping them obtain data for St. Francis House Food Pantry (SFHFP) and how this particular program helped prevent homelessness.

"We're in the middle of that project," said Burke, who's working with Amanda Walch, an assistant professor in the School of Allied Health's Dietetics & Nutrition Program, explaining that they are in phase one of the overall project. "Part of what we can give them-what we already know in general, but can give them a local specific portrait-is how, to put it simply, free food gives families a little more financial wiggle room."

Burke said when families and individuals are not dealing with food insecurity, they can turn their attention to other household necessities like paying rent, utility and medical bills. Phase two, where Walch's expertise comes in, is the nutrition quality aspect that SFHFP provides to its patrons. Burke and Walch will be examining the health implications of people's accessibility to nutritious food.

"Being unhealthy makes it a lot harder to work, and that can lead to homelessness," said Burke. "If there are things they're [SFHFP] doing, or could do differently that support people's health-that also feeds into the larger mission [in homeless prevention and intervention]."

Quality of food plays a huge role in determining anybody's health status, said Burke, but especially when it is tied to lower-income, or more vulnerable populations-the food quality factor is even more critical.

"People are better able to work and pay their bills," Burke said. "The more that people are self-sufficient, the less any of them will need these types of services."

Burke said one of the starkest insights that has come out of phase one, was that pantries like St. Francis House, Food Bank of Alaska and similar operations in town, are not just supplying individuals with two-to three-day food supplies. She said some people rely on these services as their sole source of food for the month.

"There's no pretense that this food is supposed to get people through a month-food stamps [Supplemental Nutrition Assistance Program] are not supposed to last people a month either-that's not how they're designed," said Burke. "Nonetheless, there are people where this is their entire food supply. It's not an emergency supplement-this is it."

She said that SFHFP tells its patrons that the food they're receiving is not intended to last more than two days, but employees and volunteers know better, that people are stretching their food out to three days or longer. It's not just SFHFP that has made this observation, food pantries all over the city and in the state, know that individuals and families are doing whatever it takes to make the food given to them through these nonprofit organizations last.

"It's not just the two to three days that they're getting from this pantry, there are definitely people who are going to numerous pantries, they have the schedules memorized, they have this whole system-and it's all pantry food," said Burke. She explains that people who are relying on these systems are not taking advantage, but merely just trying to survive, and that pantry food can ease a tough decision between an impending heating bill or feeding oneself and family.

"A part of what we're really going to focus on with phase two-because we intentionally left that somewhat vague-we're waiting to see what phase one yielded-is knowing that this isn't supposed to be someone's total diet, and what does that mean?" said Burke. She says the details are still being ironed out, but the hope is to survey SFHFP patrons after they've finished "shopping," asking basic questions about their food selections, and to also take photos of what's in their basket. She hopes that she and Walch, by gathering this data, can build a nutritional profile of what is available in the pantry and what people are pulling from the shelves to take home.

Burke also plans to pull in students to inventory the pantry to get a sense of how healthy a diet could be if pantry patrons were focused on following nutrition guidelines. Pantries like SFHFP are limited somewhat by the foods they can offer because much of their operation relies on charitable donations.

According to Burke, people using pantry services are aware of what is healthy and nutritious. Many patrons know that canned goods are often high in sodium and not always best for a well-rounded healthy diet, and often these individuals and families would make more nutritious food choices if they could.

"People have mostly got the public health message-you want low salt, lots of fruits and vegetables, lean meats-it's just a matter of whether they have access to those things."

Setting the stage for success

In the many years that Burke has been conducting social research in Alaska, she has seen a familiar conversation rise to the top when discussing homelessness and food insecurity.

"It's really easy to divide up the world into deserving and undeserving," Burke said. "People whom we see as really trying to be self-sufficient-they deserve our help-people who somehow don't look like they're trying-don't."

It's just not that black and white, according to Burke, and the reason she's spent much of her career focused on struggling families and food insecurity is that she's hoping to shift the conversation and mindset. She believes the issue is bigger than the charitable and nonprofit organizations who serve these seemingly fringe populations. Pantries and food stamp programs fill in the gaps, but they don't really set up the individual or family for long-term success-because they're not really meant to-they're not a long-term fix.

"I have yet to meet one person who has said, 'Yeah, the government's going to take care of me,'" said Burke. "Nobody's under any illusions that the services we provide are giving them a great life."

She hopes the community aspect of her work, partnering with CCEL, will help open the doors on this conversation, and that people will make the connection between nutritious food, good health and overall success in life. Really, Burke said, it's a basic human right. Not just to have access to food, but to food that provides the necessary nutrients to keep oneself healthy, productive and self-sufficient.

"I would like to see all of us a society, not just social workers, willing to do more to take care of our neighbors," Burke said. "I would like to see things change enough so that these people are not simply just clients, but that we simply see them as neighbors."
Written by Catalina Myers,  UAA Office of University of Advancement