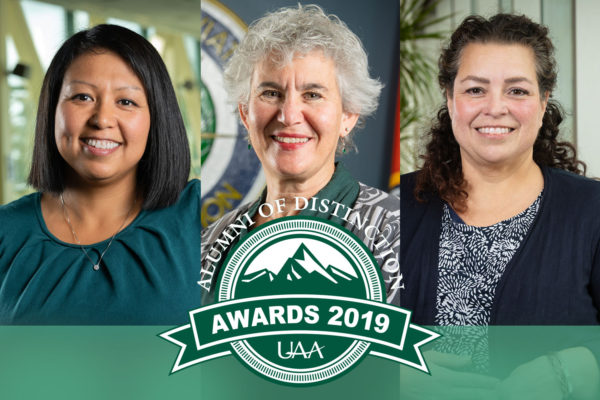 Each fall, the UAA Alumni Association celebrates three Alumni of Distinction for their contributions to their chosen fields and community. Read more about this year's award recipients, who will be recognized at the Homecoming Breakfast on Friday, Oct. 4, at the Alaska Airlines Center.

In order for the Federal Aviation Administration to stay afloat, there are a plethora of tasks for which the FAA is responsible. Many of those tasks intersect at Jacki Holzman, the deputy regional administrator for the Alaska region of the FAA. According to Holzman, her role functions to connect operations or stakeholders to address aviation safety, and is the latest in her 27-year career with the FAA. Read Jacki's story.

Originally from Oregon, Trujillo enrolled at UAA to study nursing. One day in 2002 while working to earn her master's, a guest speaker visited her public health nursing workplace to introduce the world of forensic nursing. Trujillo was hooked. Since then, she has become a forensic nursing leader in Alaska, which she describes as a multidisciplinary field that's more robust than how it's depicted on TV - more of a joint effort between health care and law enforcement that's just as much about advocating and supporting patients as it is about solving crimes. Read Angelia's story.

Growing up in Port Graham, a village only reachable by small plane or boat from Homer, Vanessa Norman always knew she would wind up working for the betterment of Alaska Native people. Of course, Norman's path might be traceable to her father, who constantly predicted all her life what she would grow up to become. But it also might do with Norman coming from a line of people who have dedicated their lives to benefit the Alutiiq people from the Chugach region of Alaska. Read Vanessa's story.