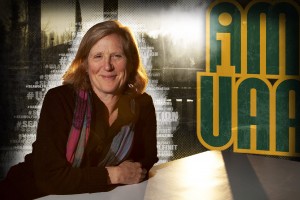 "It wasn't commented on. No one said you need to do this. It was just assumed that whatever gifts you have is brought to your community," Libby Roderick said of growing up in a family with a strong commitment to community service. "You have to figure out what your gifts are and how to best use them to respond to the needs of the world."

One thing leads to another

Early on, Libby found one way for her to give back to the community: playing music.

"When I was 18, my parents wanted to buy me clothes for Christmas because I dressed then about as well as I do now," Libby joked. "But I wanted a guitar." Her folks bought her the guitar and Libby, working as a legislative page in Juneau, taught herself to play in the chambers during the session's (many) slower moments.

The chance to share her new gift with the community came in the early '80s when an organizer invited her to play before a rally against violence in downtown Anchorage. There was just one hitch-Libby was so painfully shy and filled with stage fright, she shook for three straight days before the performance.

"Many people interpret the fact that they feel that afraid as a sign that they're going in the wrong direction. I have never had that confusion. I was aware that I was just going to have to face and master this level of fear and I would get through it."

To do this, Libby developed a pre-performance protocol that, in a nod to her roots, included a pep speech about why she was playing. "I would tell myself, this isn't about me. Someone in the audience came here tonight to hear this song for their own reasons. I just needed to deliver it as well as I could."

During her early years of performing, she played mostly nonprofit events for little compensation, earning her bread instead through a mix of writing, editing and various contract jobs at UAA and elsewhere. Eventually though, demand for her music hit critical mass, allowing her to focus full-time on her music.

Being a full-time singer/songwriter for Libby involved touring throughout the country. Since many of her shows were often on or near college campuses, she'd carry her gift as a facilitator into the classroom and community by hosting workshop-style discussions on controversial topics such as racism or sustainability-a format she'd help hone and promote a few years later at UAA.

Libby had been touring for about a decade when 9/11 happened, prompting her to take a break. "I came through the Boston airport right after the hijackers. And I thought, 'Okay, I've been traveling enough. I'd like to get back home again.'"

So she returned to Anchorage and started looking around for work. As luck would have it, UAA was looking to create a faculty development center and needed someone with writing, editing, educational design and facilitation skills. Libby's experience leading academic workshops and forums on the road made her a perfect fit. She was hired on contract and helped lay the foundation for the faculty development program at UAA that eventually became the Center for Advancing Faculty Excellence (CAFE).

Not long after CAFE was off the ground, Libby started her next big project.

In 2005, the Ford Foundation issued a call to all accredited universities for proposals around the topic of "Difficult Dialogues." With a team of staff and faculty members and support from the Office of Institutional Effectiveness, Libby submitted a proposal that earned UAA one of only 26 $100,000 grants from the pilot program.

The centerpiece of the grant was the development of a book entitled, "Start Talking: A Handbook for Difficult Dialogues in Higher Education." The book serves as a resource for faculty development training, in addition to propelling other community efforts related to conducting discussions around controversial topics.

As one way to encourage people to start talking, the initiative has partnered with the University Honors College for the past few semesters to offer one-credit courses examining controversial topics in depth. The class for spring 2013, which Libby co-taught with Institute of Social and Economic Research (ISER) professor Bob Loeffler, encouraged students to think critically about one of the biggest policy debates in Alaska right now: Pebble Mine.

Of the class, Libby said that, while most students either came in with either a very strong opinion or no opinion at all, most ended the semester a "bit sobered by the complexity of the issue-and that's exactly what we wanted."

The Anchorage community is also invited to engage in important and challenging conversations via regular public policy debates hosted by CAFE and the initiative. According to Libby, the debates help accomplish three things: "1) Showcase UAA's debaters; 2) Show the community how faculty expertise can help us sort through tough issues; and 3) Encourage informed public discussion." In a similar vein, the Books of the Year program, also a Difficult Dialogues project, hosts public salons every month encouraging Anchorage residents to come together to discuss controversial issues and learn from each other.

The impact already extends well beyond Anchorage and the University of Alaska communities. Several universities in the Lower 48 have requested presentations and used the "Start Talking" handbook to introduce difficult dialogues into their own curriculums, and Libby herself has traveled to South Africa two summers in a row to help the University of the Free State integrate the strategies into its academic programs.

"Only 19 years out from apartheid, they're intent on instilling the habits of democracy in the current generation... They are looking for  ways to ensure that the country continues as a democratic nation," Libby said. And as far as she knows, the Difficult Dialogues partnership is the only faculty initiative underway to help achieve this goal.

In 2008, the Difficult Dialogues Initiatives at UAA received another grant. One major outcome this time was a book entitled, "Stop Talking: Indigenous Ways of Teaching and Learning and Difficult Dialogues in Higher Education." Published last year and co-authored by Libby and Aleut leader Ilarion (Larry) Merculieff, it outlines an innovative project to integrate 10,000-year-old traditions into university classrooms. CAFE plans to host more workshops later in the year introducing faculty to the work.