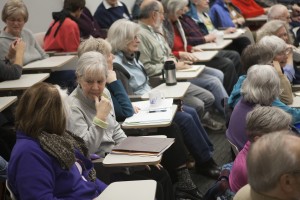 OLÉ! students chat before their class on World War I History. The class is one of around 75 classes offered across the city each year. (Photo by Philip Hall/University of Alaska Anchorage)

On a recent Friday morning, a Rasmuson Hall classroom-with a capacity of 92 students-was close to overflowing. Light cheerful chatter carried over the ascending desks as late arrivals brought in extra chairs from the lobby to fill in behind the back row. Retired UAA professor Dr. Dieter Wuerth cued his PowerPoint on World War I and the classroom hushed. Looking out over the packed house, there were no sweatpants or snapback hats or other college student fashion standbys. Rather, it was a sea of senior citizens.

According to population estimates from the National Center for Health Statistics, the senior population in Alaska is booming with boomers. In the last seven years, the state's population aged 65 and older increased by 45 percent. Thousands of Alaskans spend their golden years in a place that's long boasted an anomalously active population; Alaska's seniors aren't the type to relax too hard in retirement, and that covers everything from travel to recreation to continuing education.

Thankfully, there are two excellent resources for seniors looking to head back to the classroom and enjoy the great indoors of Anchorage.

Opportunities for Lifelong Education-better known by the affable acronym OLÉ!-is a non-profit that organizes courses for Anchorage adults for an annual membership fee of $150. Each semester, the organization offers a slew of wide-ranging courses that touch on nearly every academic discipline and community interest, from anthropology to jazz appreciation to theater criticism to ukulele. Classes in the past year include intriguing titles like Chinese Philosophy, The Alaska Zoo: Behind the Scenes and A Survey of Alaska Poetry.

"A lot of our curriculum ideas come from somebody who knows someone with an interesting profession and figures out how a course might mesh with that," explained Sandra Christopherson, part of the curriculum development team at OLÉ!

"Our mission really is to provide courses that are academically oriented," added Penny Cordes, Sandra's curriculum compadre. "However we do offer things of general interest." 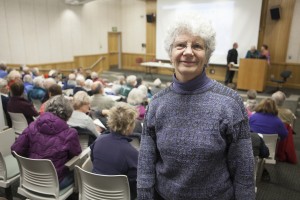 OLÉ! launched in 2007, after a group of Anchorage neighbors discussed the possibility of a continued-education program. Several months later, OLÉ! rolled out their first seven classes. The program's been barreling with momentum ever since, and its exploding popularity has forced some unexpected changes in recent years. They've recently moved to an online registration process, as student interest began to outpace the capacity of their available classrooms.

"OLÉ! is an organization of its members," Penny said of the program's structure. "There's an annual membership fee of $150 that can be paid any time during the year, and with that $150 you can take as many classes as you want for free during the three terms we offer classes." Occasionally, fees apply for extra materials, like art supplies or cooking class ingredients, but otherwise the combination of donated space and volunteer instructors enables OLÉ! to offer around 75 courses a year for its members.

As curriculum architects, Penny and Sandra enjoy the diverse task of translating myriad ideas into a slate of short courses. Through their determination, they lock down an all-volunteer team of instructors from USGS, Department of Fish & Game, the Anchorage School District and especially from UAA. "We also contact anybody in the community who has a particular strength," Sandra added. "And now we actually have people asking to teach for us, and we try to honor those people too."

Once an instructor signs on, they have a fair amount of creative control over the lectures, content and even when and where they'd prefer to teach. Courses are 4- or 8-week sessions, held once a week. "It's something we can fit into our busy lives," Penny explained.

An ideal feature of OLÉ! is its focus on expanding community interests into academic discussions. One semester may include literary readings of plays performed in town that season, while the next discusses marine mammals of Alaska. Other courses have focused on urban planning in Anchorage, the operations of Municipality utilities, visits to recycling centers or the geology of neighboring volcanoes.

Courses are designed for people over 50, but are open to the whole community. There are 272 members enrolled in classes this fall out of a current membership of 333, with hundreds more on the mailing list.

"We have wonderful students, all of whom are interesting people who are eager to learn, enthusiastic, and eager to spread the word," Sandra said. 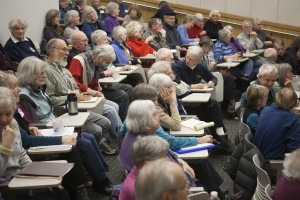 OLÉ! classes are held all over Anchorage, including UAA, the branch campus in Eagle River and UAF's Cooperative Extension Services center on C Street. (Photo by Philip Hall/University of Alaska Anchorage)

Although OLÉ! exists independently of UAA, it enjoys a beneficial relationship with the university. Classes on campus are scheduled for Fridays, when rooms are available and parking is free. The current president of OLÉ! is professor emerita Dr. Gretchen Bersch, who helped create the Master of Education in adult education at UAA. Additionally, many instructors come direct from the ranks of UAA faculty. "We rely heavily on UAA faculty, both current and retired," Penny said.

Learn more about OLÉ! at their website, where you can see past and present courses offered. The next slate of classes will be announced in mid-December for the winter term, which kicks off on Jan. 12.

Senior citizens looking to step back into the campus classroom and bolster their transcripts have an excellent resource as well. 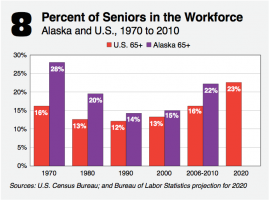 Alaska's seniors have remained in the workforce at a higher rate than the national average for the past five decades. Source: State of Alaska Department of Labor and Workforce Development.

The senior citizen tuition waiver is a University of Alaska system-wide policy, allowing eligible Alaskans free tuition at any UA campus. To qualify, seniors must be eligible for full social security benefits from the federal government. These benefits are built on a sliding scale, so the age of eligibility varies based on year of birth (a chart of current eligibility ages is provided on the Social Security website).

The other key component-waivers are only available on the first day of classes, at the earliest. Degree-seeking students are the university's priority, but senior citizens are welcome to fill empty seats in the classroom once the semester begins.

Waivers cover tuition, but not course fees. However, every UA class is available for senior citizens, from Japanese to creative writing to culinary arts and welding. Forty-five Alaska residents took advantage of the waivers at UAA in fall 2013 and this semester the numbers climbed to 50.

Don Gatzke is one UAA alumnus who earned his entire master's degree from the senior citizen tuition waivers. Don-who has a Ph.D. in higher education administration-has worked most of his career at state universities in the west and midwest and is very familiar with the tuition waivers. He helped implement senior-friendly policies at his prior institutions, including waivers in effect today in Missouri, Montana and New Mexico.

As a long-time supporter of the waivers, he was grateful to discover Alaska offered a similar option. "When I was college administrator, people asked, Why do you want these old people in your class?" he said. "Because they vote. They have kids that vote. They have grandkids that will go to college and it's a great recruiting tool ... we really worked it as a senior service so people could see where their money was going. They got on campus, they began to see maybe some of these college kids weren't as bad as they thought, and they grew more supportive of funding postsecondary education.

"If the seat is open and there's no one to fill it, then it only made sense for public relations," he added. "The teacher will not be paid anymore and it won't take any more utilities-the only [cost] is the processing of the paperwork." From his perspective, senior waivers don't sap the university. They enhance it. 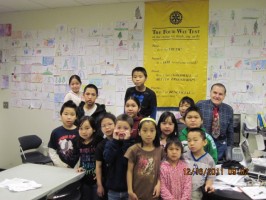 Don and a few of his students at Hooper Bay School with a wall of their artwork. Photo courtesy of Don Gatzke.

After a career in higher education, Don is now a school counselor in the coastal village of Hooper Bay. With two advanced degrees already under his belt, the master's at UAA wasn't necessarily for career improvement. "More than anything, [it was] for my own satisfaction to see if I still had it... or if I ever had it," he joked. "It was an interesting exercise, an interesting experience, and I met some tremendous people along the way."

Don received his Master of Education-his fourth degree-from UAA in 2014, graduating with a 4.0, and he plans to continue working. "I think our seniors have a lot to offer. I think a lot of places would do well to give that some thought," he noted, citing specifically the longer hours seniors are willing to dedicate over younger, busier colleagues. "Our seniors have a great deal to offer, both in experience and dedication." He doesn't agree with the argument that seniors can dedicate more time because they 'don't have a life.'

"My life is helping the students I work with."

"Lifelong learning at UAA" is licensed under a Creative Commons Attribution-NonCommercial 4.0 International License.