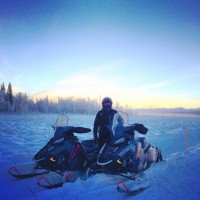 Out on a practice run. (Photo courtesy of Rachel Kidwell)

We last caught up with Rachel Kidwell during her 2014 Iron Dog Trail Class run for a story in UAA Alumni Spirit magazine. She and her teammate spent five days blazing snowmachine trails between Big Lake and Nome. Those cold, bumpy miles-1,000 of them-solidified Rachel's resolve to go pro and join the Iron Dog Pro Class for 2015.

"I just needed to find the right teammate," Rachel said. At more than 2,000 miles, the Iron Dog Pro Class race isn't for the green. To put those miles in perspective, a course like that would get you from Los Angeles to Chicago, or all the way across Europe-from Liverpool, England, to Moscow, Russia. Just, you know, without roads. Ashley Wood, who Rachel knew to be an experienced rider, was one of the first women she considered for this epic trek.

"I talked to her a bit and got her talked into it," said Rachel with a laugh. "I think we officially decided in August."

The logo Iron Dog Team 4, Rachel Kidwell and Ashley Wood, will be sporting, along with their supporters. Design by Yang Wren Art. (Image courtesy of Rachel Kidwell)

The two went on a sponsorship blitz, netting gear and financial backing from some good-hearted folks. Rachel actually connected with some key sponsors on the trail last year. Dr. Matt Heilala, of Alaska Foot and Ankle Specialists, and his Trail Class partners, from Alaska Spine Institute and BDO Alaska, told Rachel to look them up if she ever decided to go pro.

"They all said, hey, if you run Pro Class, give us a call," she said. "So I did and they've been awesome this year, especially Alaska Foot and Ankle Specialists, who became our platinum sponsor."

Even with low snow conditions this year the women of Iron Dog Team 4 have been racking up miles on their practice sleds. Their race sleds-each Pro Class team member is required to have two sleds- are kept in mint condition, with upgrades like bigger fuel tanks and LED lights, so they'll be set to tackle the trail without too much wear and tear. Though these women have worked hard to develop the wrenching skills they'll need to keep everything running along the trail, the less they have to do en route, the better. 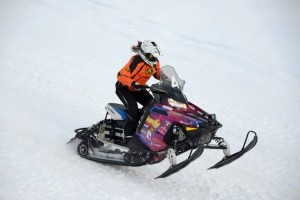 Ask Rachel about being the only all-female team among a field of 37 and she's quick to play it down. With a little digging, though, you find out they're the only all-female team to compete in the Iron Dog Pro Class since 2010. If they finish, they'll be the second all-female team in race history to do so. But ultimately, the duo considers themselves just one of this year's 10 all-rookie teams. A finish in Fairbanks would net them veteran status.

Following along online and on TV

This year's Iron Dog will stage a ceremonial start in downtown Anchorage on Saturday, Feb. 21, and Rachel would be happy to have a cheering section. Here are the start details.

You can follow the racers' progress online via GPS. Link to the GPS tracker via the Iron Dog website.

KTUU Channel 2 will also be covering the race live, along the trail. They'll partner with Emmy Award-winning producer Peter Henning to create a one-hour documentary about this year's race, set to air March 31, 2015 on NBC Sports.

Rachel and Ashley aren't thinking too much about the cameras, though. They're looking forward to that Fairbanks finish, followed by a warm road trip back home to Anchorage. Maybe with a stop off in Chena Hot Springs to really drive the chill from their bones.

Stay tuned in to the Iron Dog Team 4 happenings on Facebook.