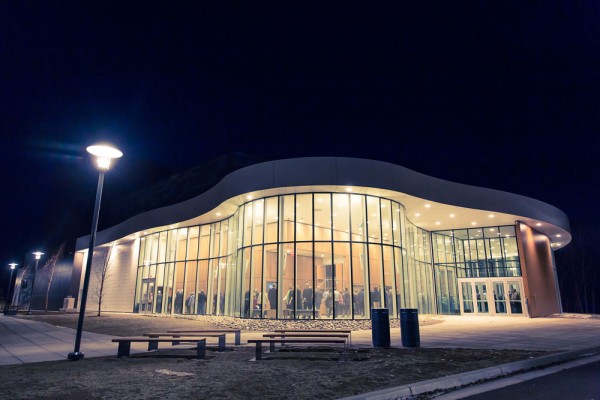 The new Glenn Massay Theater opened at Mat-Su College Feb. 7, 2015. The glass-walled lobby has gas-filled double panes that keep heat in during winter and out during summer. Special coating on the glass will protect against interior fading of furniture as well as the original Machetanz oil painting hanging in the lobby. The intended effect of the curtain-like glass-walled lobby is an invitation to "step behind the curtain." (Photo by Heather Dunn, courtesy of Mat-Su College)

Matanuska-Susitna College opened its shiny, new Glenn Massay Theater with a splashy event on Saturday, Feb. 7, 2015. The $20 million, 523-seat facility came to fruition through a University of Alaska statewide bond package approved by Alaska voters in 2010. The unique building features a glass-walled lobby meant to represent a theater curtain. Accordingly, visitors are meant to have the sensation that they are "stepping behind the curtain" as they enter the building. 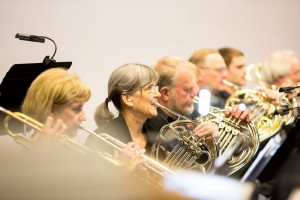 The lobby, featuring the Fred Machetanz original oil painting,"Preparing for the Hunt,'  also has the capacity to serve as a reception and meeting area. Accommodations include 200 seats equipped with flip top desks, allowing for large lectures. The facility features state-of-the-art lighting and sound systems. Those include an ETC Ion light board with ETC Source 4 LED and Selador D60 color-changng instruments. Intelligent fixtures and spotlights will allow the facility to light performances and events from lectures to rock concerts. On the audio side, a Meyer Sound Constellation Acoustical System provides digital enhancement and surround sound to enrich the an orchestra, a musical or a movie. On stage, a 41-line set fly includes the main drape, legs and borders, four electrics, a cyclorama and a 33 by 17-foot projection screen. An orchestra pit is also available. On opening night the theater was dedicated to Glenn Massay, with Mrs. Donna Massay and other family members present. Massay, who died in 2013, had a long and distinguished career with the University of Alaska, including seven years as director of the Matanuska-Susitna College campus. In addition, he served as president of the Greater Palmer Chamber of Commerce and was an active member of Valley Performing Arts (VPA). 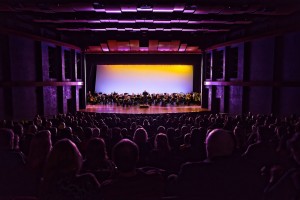 Glenn Massay Theater features 523 seats and lighting for all productions, from theater to lectures. (Photo by Heather Dunn, courtesy of Mat-Su College)

Dr. Massay was an accomplished tenor and a video clip of him singing the VPA performance of "Paint Your Wagon" screened at the grand opening ceremony. The audience then watched the first live performance in the theater when Gleo Huyck conducted the Mat-Su Concert band. One piece featured an interpretative dance by Jamie Metcalf, also of the valley. Several college alumni volunteered  as ushers. 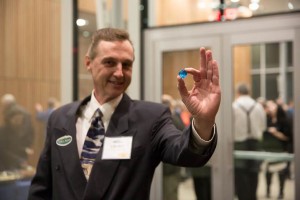 The new theater building is designed and built to "LEED certification" levels. The special glass in the lobby uses a gas-filled space between two panes of glass, enhancing insulation. Special Low-E coating on the glass will block infrared light, keeping heat inside in winter and outside in summer. The coating filters damaging ultraviolet light (UV) to help protect interior furnishings from fading as well as the Machetanz oil. Other features include: 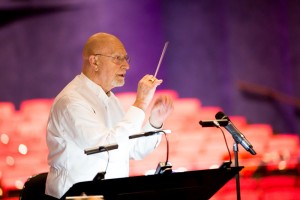 The transformative power of the new facility  for both the college and the community immediately became apparent the day after the grand opening.  The theater has many potential uses and is already booked for several events. On Sunday, Feb. 8, the theater featured a performance by the band the "Duhks" of Canada. The audience was enthusiastic and the campus now benefits by becoming a community attraction as well as an educational facility. Upcoming events include Colony High School performing "Shrek the Musical" on Feb. 19, 20 and 21. On the evening of Feb. 19, Northrim Bank will sponsor a lecture by Tim Bradner.  Further, Mat-Su College in partnership with the National Organization For Women will present the Equinox Film Festival March 21. This event is a collection of  films showcasing women. The theater is already booked for community and college purposes through the start of the coming summer.   Talis Colberg, director of Mat Su College; Matt Sale, managing director of the theater; David Johnson, UAA alumnus; and Courtney Brooke Smith, director of marketing and communications, contributed to this story.