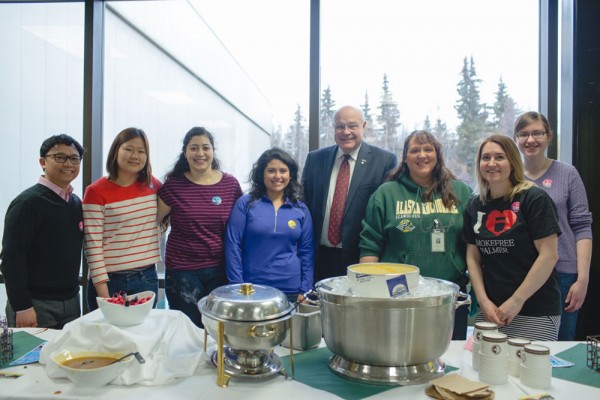 UAA leadership has selected Thursday, Nov. 19, 2015 as the day UAA will go tobacco free. UA Board of Regents, in a vote in December 2014, decided all UA campuses must be smoke- and tobacco-free no later than Dec. 1, 2015.

The university is committed to providing a safe and healthy environment for its students, employees, and visitors, by prohibiting tobacco use and smoking, including the use of electronic cigarettes and similar products, within its campuses and facilities. Implementation of this policy may be established in university regulation.

University-wide regulations enforcing this policy can by located by scrolling to Page 18 of the Capital Planning and Facilities Management policy.

The transition date for going tobacco-free at UAA became public on campus March 18 during the Kick Butts Day celebration. Nov. 19 is a significant date, organizers point out, because it is also the date of the Great American Smokeout Day, begun in the 1970s by the American Cancer Society to help Americans quit their tobacco habits. 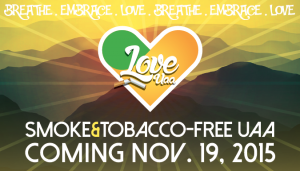 A card that includes cessation resources at UAA will be handed out on campus, the implementation team said.

Kick Butts Day is a youth activism campaign aimed at empowering young people to "stand up, speak out and seize control from Big Tobacco." A key element of the campaign is to "expose and counter tobacco industry efforts to market to children and mislead the public."

A preview of UAA's eventual tobacco-free campus came in 2013 when Chancellor Tom Case signed a proclamation designating Nov. 21 of that year as a smoke-free day on campus.

Probably the first thing campus-goers will see is a swap out throughout campus to new signage. Instead of the current "No Smoking" signs outside campus buildings, you'll see this language, "Welcome to UAA, a smoke-free and tobacco-free campus."

UA regulation recommends peer-enforcement, meaning anyone on campus who sees a smoker is encouraged to inform him or her of the new restrictions on campus. UAA likely will follow that guideline in the early stages of implementation. However, the implementation team will consider whether stricter enforcement, which may include tickets and fines, are eventually required to strengthen compliance.

Chancellor Tom Case has appointed Gabe Garcia, a professor of public health, and Joy Chavez Mapaye, a journalism and communications professor, to lead the implementation effort at UAA.

Essentially, the original task force has morphed into the implementation team. They will organize into five committees:

Garcia, Mapaye and student task force members have done their homework, scouring the experience of other college campuses that have already adopted smoke-free and tobacco-free environments. More than 1,200 campuses across the United States have made it their policy.

"We know we'll experience a few bumps along the way," Garcia said. "But as the number of smokers inevitably declines, you have fewer and fewer issues. And the end result of a tobacco-free campus is what we are looking for."

Garcia noted that not every campus may be ready for implementation, so unwillingness to accept and abide by the policy may surface at other campuses and perhaps affect UAA. But, said Mapaye, research at UAA shows that the "silent majority" of the community, the "great reasonable middle," prefers a smoke- and tobacco-free campus.

Indeed, a staff and faculty survey in September 2014 showed that 61 percent of respondents (439 staff and 313 faculty representing 200 departments/programs on campus) strongly support a smoke-free campus. 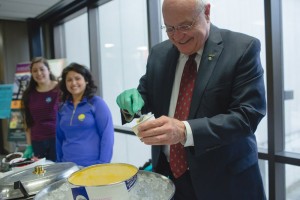 Chancellor Case scoops some ice cream as part of the Kick Butts celebration March 18. Behind him are Yesenia Camarena and Valeria Delgado, two students who took their initiative for a smoke-free campus to the Board of Regents and to USUAA.

To prepare for implementation, UAA's task force looked closely at the University of Oregon's experience, Mapaye's alma mater. That campus has been tobacco free since fall of 2012, she said.

UA's policy differs from Oregon's in that it allows anyone in the UAA community to smoke in their car as long as the car is not parked in a campus parking garage. UA also expressly prohibits e-cigarettes as well as traditional tobacco products.

During discussions at UAA, one sticking point was security for smoking dorm residents. Currently, students cannot smoke in their dorms, but they can smoke right outside in designated smoking areas. Under the new policy, they will need to walk off campus to smoke a cigarette. Some respondents questioned the safety issue.

Mapaye said late-night smokers are no different than a student choosing to go out late at night. UAA security patrols the campus perimeter for student security already. This will be no different, she said.

As a journalism and marketing expert, Mapaye said she was compelled to act because of the volume of advertising the cigarette industry aims at young people.

"The tobacco industry spends billions of dollars on marketing," much of it aimed at young people, Mapaye said. "The perception they want to put out there is that smoking is cool and smoking is a personal right. But this is a manufactured pitch."

Mapaye says national data shows why the industry targets young people. "If you don't smoke by the time you are 26, you probably never will."

The American Cancer Society projects that in 2015, an estimated 1,658,370 new cancer cases will emerge, and 589,430 people in the United States will die from the disease. According to the Tobacco Atlas, tobacco smoke contains 69 cancer-causing ingredients. The impact on non-smokers, including those with compromised respiratory conditions like asthma, can be significant.

To put some perspective on that, the task force looked at data from two reports, the Summex Health Management assessment of all UA employees's wellness (2007), and the National College Health Assessment, which looked at UAA student health (2009). By comparing the task force's own research along side numbers in both reports, Garcia said students with challenged respiratory conditions or cardiovascular disease are double the number of smokers on campus. For faculty and staff with those health complications, the numbers are triple those of smokers on campus.

Garcia said the implementation team knows that quitting tobacco is more than a matter of sheer willpower; an encouraging community-marked by tobacco-free space-can be vital. for individual success. To that end, UAA will make cessation resources widely available on campus.

Mapaye said the UAA effort was never an anti-smoker campaign. It has always been about moving the community to a healthier environment for everyone on campus.