Will climate change lead to human violence or cooperation? 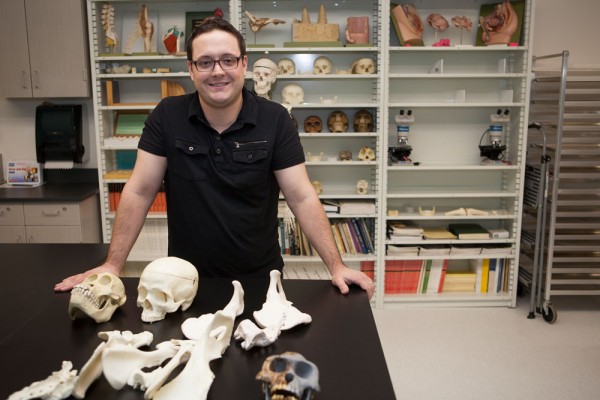 Ryan Harrod, a bioarchaeologist in UAA's anthropology department, happens to teach a class on violence. It gets him a lot of attention, especially in this pre-apocalyptic global moment of great climate change.

Everyone wants to know: Will we dissolve into warring hordes fighting over food scraps and the last drops of gasoline? To deny this prospect captures our imagination is to ignore the May release of episode four of the Mad Max dystopian movies, "Fury Road." We sit in the dark eating popcorn and worrying: Is this our future?

Harrod has the unsatisfying answer: It all depends, on our values and our options. He says research shows human populations have gone both ways-toward violence and toward cooperation.

"Reading the bones" of the ancients, as bioarchaeologists do, researchers can correlate episodes of drought and famine with identifying markers on skeletons: trauma from conflict or accident to malnutrition and abuse. The tricky part is that climate data recorded in tree rings is specific; accurately aging bones is less so, "50 years either way," he says.

He and research colleague Debra Martin from the University of Nevada Las Vegas make their points in a new book, "Bioarchaeology of Climate Change and Violence." They focused on the Anastazi or Ancestral Pueblo culture in the Southwest United States between 900-1300s.

That region offers a great example, Harrod said, because there were multiple climate change events-not just one drought but a history of droughts, with one series that lasted over a 50-year period. Given the duration, eventually the whole society was severely taxed.

"But the people didn't disappear, they didn't vanish," he said. "They migrated to new areas and reorganized. It's the same people. We could test the genetics and we can connect the bones of the ancestors to descendants living in these new communities."

Another favorite example comes from the work of a researcher in the Near East, who documents that when food stress accelerated in Mesopotamia, some cultural groups chose to work together to expand their network. "They started looking to their neighbors and sharing and trading more resources," he said. In other words, they cooperated.

The truth is, Harrod says, our human history shows we have cooperated much more than we have done violence to each other. Cooperation defines us.

Still, the violence is there. He remains interested in the topic because, "violence is very real in many people's lives today." But also it's been a part of human history for such a long time. "Some argue it goes all the way back to our evolution," he said. "I believe it is a culturally learned behavior, because violence happens in the context of culture."

Some societies have little or no violence while it is rampant in other places, fueled by political history, legacies of war or religious fervor.

"The way I explain it to my students is, we're looking at past lived experience. We're looking at being human through time. We can study people today, but we're in our own context. When you go back in time, you can see certain things about being human appear again and again," he said.

Harrod reflects briefly on what Anchorage's bones will show in a few hundred years. He says we'll see "structural violence" built right into our society; we'll be able to identify the remains of the well off as well as the remains of the homeless.

"You don't see much evidence of homelessness in hunter-gatherer groups, where cooperation is key to survival," Harrod said. Instead, "state-level societies allow for it, when there is exploitation of resources and more complexity." Another way to describe that complexity is the ability to live "behind closed doors," where abuse against women or children also can happen, out of sight of the larger group. People lose their connection to the larger support networks in the community.

But his work is hardly all dark. Harrod and graduate student Alyssa Willett will present a paper in April exploring their work on the remains of an ancient Aztec woman whose skeleton revealed a broken pelvis, broken ribs, a twisted leg and an atrophied shoulder.

"She had lots of injuries," Harrod said, "but someone took care of her. So we're looking at the idea of care in these societies as well."

A version of this story by Kathleen McCoy appeared in the Alaska Dispatch News on Sunday, March 22, 2015.

"Will climate change lead to human violence or cooperation?" is licensed under a Creative Commons Attribution-NonCommercial 4.0 International License.