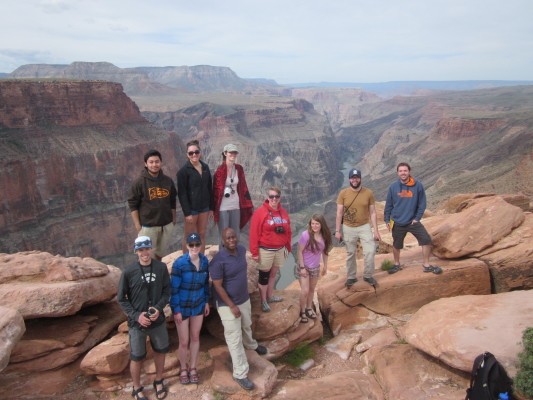 The 10 students in GEOL 382 stand on the edge at the Toroweap Overlook on the north rim of the Grand Canyon. (Photo courtesy of Terry Naumann)

What happens when you take 10 Alaskans to Death Valley on a 90-degree day?

"It wasn't that hot," geology professor Dr. Terry Naumann laughed. "They thought, 'Oh my God, this is unbelievable,' and I thought, 'This is like a winter day!'" 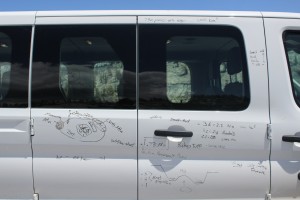 Out in the field, the big van doubles as a big whiteboard. (Photo courtesy of Jose Mora)

Naumann recently returned from his biennual rock tour of the Southwest, which he's led every other year since 2000. He previously taught geology at University of Nevada, Las Vegas and knows the surrounding area well-Utah's hidden canyons, California's wildflower-carpeted valleys, Nevada's herds of wild mustangs and, most of all, the entire region's incredible and accessible geology.

For 10 days in May, Naumann and 10 geology students packed into a big white van (which doubled as a whiteboard during outdoor lectures) for a three-state, 1,600-mile loop of the rocky hotspots of the American Southwest. 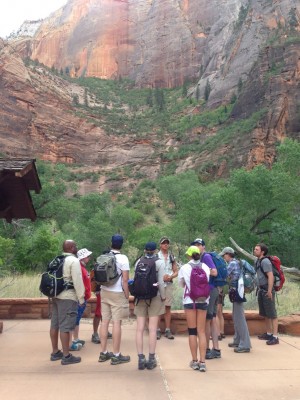 "In what other major can you receive credit for camping and hiking while simultaneously learning about earth's processes?" noted Anna Stanczyk, a geological sciences major who formerly studied French literature.

True, students in most other departments don't camp alongside their classmates under a blanket of stars. Nor do they stop by their professor's house in St. George, Utah, to play cards and do laundry. Nor do they collectively visit alien souvenir shops on Nevada's Extraterrestrial Highway. In every respect, Naumann's summer field trips are a unique class experience for UAA students.

Alaska is a geologic treasure chest-just look in any direction from Anchorage and you're bound to see mountains-but the rocks here aren't ideal for geology newbies.

"The geology [here] is very complicated," Naumann explained. "Alaska has gone through a pretty torturous past, so it leaves the rocks pretty beat up." On that note, it leaves the rocks pretty unreachable as well. "If you had a plane or a helicopter, sure, Alaska's got everything, but what's available to me during the school year is super-limited," he continued. Alaska may be home to about 10 percent of the world's active volcanoes, but they're incredibly difficult to reach (and impossible with a van full of students). 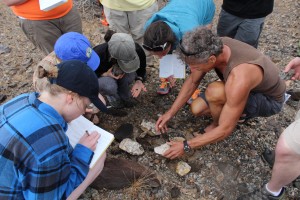 Dr. Naumann compares rocks in the field with his students outside Las Vegas. (Photo courtesy of Jose Mora)

With that in mind, Naumann has led a multi-week geology field trip every summer for the past 15 years, rotating between two tried-and-true destinations. In odd-numbered years, Naumann takes his students camping among the mountains and outcrops of the Southwest. In even-numbered years, his students are off hiking the igneous outflows on Hawaii's Big Island.

This summer's class focused on two geologic provinces: the Colorado Plateau, where the rocks are uniquely undisturbed, and the Basin and Range-a swatch of the Southwest where the Earth's crust is slowly stretching out. "We begin in the Colorado Plateau since it is mostly comprised of simple flat rocks and pancake topography," Naumann explained. "When you're a student of anything, simple is good." 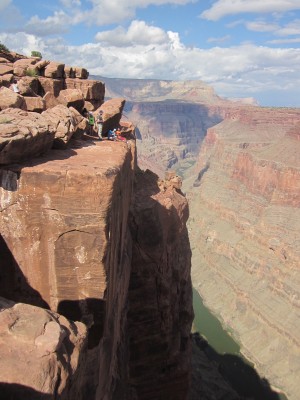 Life on the edge. Brave students perch atop the cliff at Toroweap Overlook at the Grand Canyon (click to enlarge). (Photo courtesy of Terry Naumann)

But his professional background is in volcanology and, to a lessor degree, structural geology and the faults and folds of the crust. After starting with the basics, the trip moves through increasingly complicated formations in Utah, Nevada and California throughout the 10 days.

"Every time we stop the van, there's something different. And that's not something we can easily do in Alaska," he noted.

Students in Naumann's class start their journey in Las Vegas, then head out to geologic spots both iconic and accessible-a quiet arm of the Grand Canyon, Zion's rosy sandstone cliffs, the dunes of Death Valley. This year, thanks to low snowfall, the students were able to add an extra detour to Yosemite's unending sea of granite.

"My goal was to try to hit every kind of rock and every kind of geologic structure," Naumann said of the itinerary, which focused on the region's big draws. "It would be like an undergrad architect going to look at Notre Dame and the flying buttresses-it's classic." 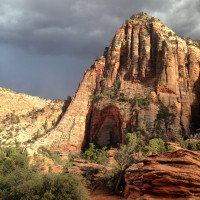 "The most valuable part of the trip was being able to see the structures and features we'd only previously read about in textbooks," said Anna Stanczyk, one of the trip participants. "As intended, the hands-on nature of the trip allowed me to further understand what I'd already been taught in a classroom. It all began to click."

Jose Mora, also a geological sciences major, agreed. "In class we get a little rock in a box and we're asked 'What is it? Where did it come from? How did it form? What minerals are in it?' And you're like 'I don't know.' On the trip, we were able to see and pick up rocks from their source. We could physically see, touch and stand where those little rocks in the boxes from class come from."

Another major benefit of the trip was of course the camaraderie. Sandwiching 10 geology students into a van with their professor can go either way, but thankfully this group became quite close (the volume of group photos is a pretty clear indicator). 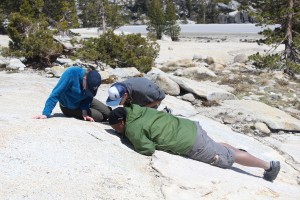 Students get up close with granite samples at Yosemite National Park. (Photo courtesy of Jose Mora)

"You need to have a team, because no geologist works by themselves," Naumann explained. In the field, professional geologists don't simply work and research together. They also hoof gear up volcanoes, boat to remote islands and even cook group meals in collaborative teams.

"Anybody that's been on one of my trips, they go to field camp and they've already got a leg up," Naumann stated. "The ones that have gone on this trip, in the long run, they just make better geologists."

The value wasn't lost on the students, either. "The trip was absolutely awesome and we all learned a tremendous amount," said geology senior Larry Shores.

"In the end, I think that the people who went on the trip were the ones who made this trip so great," Jose added. "It was a great group of students who got along exceptionally well and had the perfect mix of personalities. We knew when it was time to be serious and learn, which was most of the time, but we also had time to unwind, sit down by the fire at night, talk and have some fun as a group of good friends." 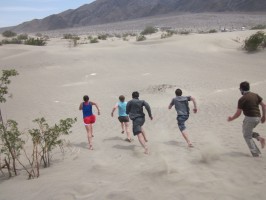 Students take off across Death Valley on their summer geology trip. (Photo courtesy of Terry Naumann)

"Not only was the trip a remarkable academic experience, it taught valuable life skills as well," Anna added. "The 11 of us learned to work together as a team. We practiced patience, acceptance and resourcefulness all while learning and thoroughly enjoying ourselves ... Corny as it may sound, by the end of the trip I felt extremely proud of all my classmates. What we ultimately learned extended far beyond the geology lectures."

"When you look around, people who go to these really swanky schools, they don't do this," Naumann said of UAA's geology program. Where other universities focus heavily on graduate research, UAA's program provides numerous field opportunities for undergrads, arming them with valuable résumé boosters.

"Our students are very successful at getting jobs right out of here."

"The most memorable part of the trip was the trip itself," Jose concluded. "Everything was spectacular from the views to the rocks to what we learned, it was amazing.

"It's difficult to pick out a most valuable part of the trip ... but if I had to pick something, it would be the opportunity to go out in the field with an exceptional expert like Dr. Naumann." 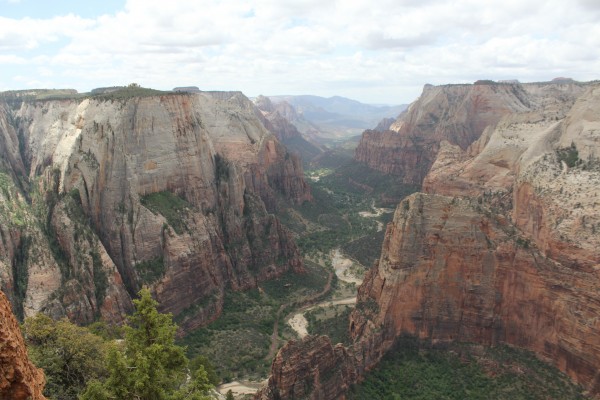