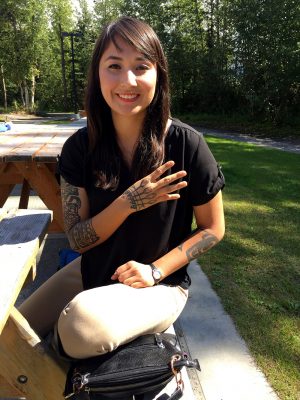 Crystalyn Lemieux was 14 when she first decided she wanted a tattoo, but waited more than a decade to get one, however, because she wanted the design to have meaning and purpose.

"The tattoos before were shameful, so I think a reason I got it was that I'm working through the shame, through all the traumatic experiences I've had in my lifetime," said Lemieux, a UAA alumna who is Tlingit and originally from Haines. "Traditional tattoos represent a way of healing, a way of bringing that back and honoring the ancestors. I see it as sort of a reconciliation."

Tattoos are one way Lemieux found to connect with her culture. E-portfolios have been another. She recently received a Fulbright grant that will enable her to work for nine months with Dr. Tracy Penny Light at Thompson Rivers University in Kamloops, British Columbia, while learning about cultural identity e-portfolios and assisting indigenous and other students in creating them. She leaves for Canada in September.

"UAA Native Student Services is doing something similar," Lemieux said of the cultural identity e-portfolios. "So we'll be finding ways the students here in Anchorage and the students in Kamloops can connect, building the outline for that, doing a pilot project, in a sense. Anything I work on, [Penny Light] is going to build upon because she's an expert. She's hard core. My work will be assisting her, learning from her and building a relationship with the community."

The goal of Fulbright grants is to weave new relationships and spark productive insights between Americans and people from other countries.

"They start working together," Lemieux said. "With the cultural identity portfolio, students can share knowledge and ideas through the work they do at school. I think oftentimes a lot of students think they have to choose either their culture or education. But really education is just a tool: You can teach your culture and infuse the education into the culture. You don't have to throw away your values and everything you've been taught."

E-portfolios offer connections to students who, due to a variety of circumstances, otherwise might feel isolated.

"There's a lot of people who can't travel to other countries because they might not have the finances, they may not have the opportunities or maybe no one tells them about opportunities," she said. "They might already have families and so they might not be able to leave their families to go on an exchange program. It's really up to the student how they want it to unfold: You just give them an idea, a guideline, but they're the ones who will fill it out."

Lemieux started her own e-portfolio through Native Student Services at UAA, "and so that's a work in progress, too," she said. "I was putting in things like old schoolwork I used for different classes and how I started incorporating the culture into it, papers I've written about different things going on in the Alaska Native community."

But cultural identity portfolios are not limited to indigenous students-any student can create one.

"I've met people who are non-Native who strongly identify with a certain culture," she said. "Maybe they were raised in a village or their parents picked up those values. There's culture everywhere. Everyone has a culture. It's just whether or not you recognize it."

Lemieux's awareness of her Tlingit culture began growing in 2013 when she started an internship with First Alaskans Institute and participated in its Alaska Native Dialogues on Racial Equity (ANDORE) project.

"They asked us a simple question: When did you first experience racism?" Lemieux recalled.

Lemieux grew up in Haines, a place she described as a predominantly white and middle-class community.

"I knew there were differences because I'm Alaska Native and I was right below middle class but wasn't in extreme poverty," she said. "I grew up with people who struggled with those things but nobody bluntly talked about racism with me. I actually didn't have Native friends until I got to college. I wasn't in denial about racism, I was just oblivious about it."

The experience awakened a desire to learn more. Lemieux started reading and taking classes about Alaska Native history and started to understand how the past tied to the present.

"You go through a period of anguish and anger," she said. "Then you finally come out of it and realize, OK, this is what I can do. I can help other people. And I can just bring this topic up because [other people] might not ever hear about it. They could go their entire life and not know what happened in the past, not have the understanding on why things are the way they are. They don't understand why there are so many social problems in the Native community because they didn't look back at the history." 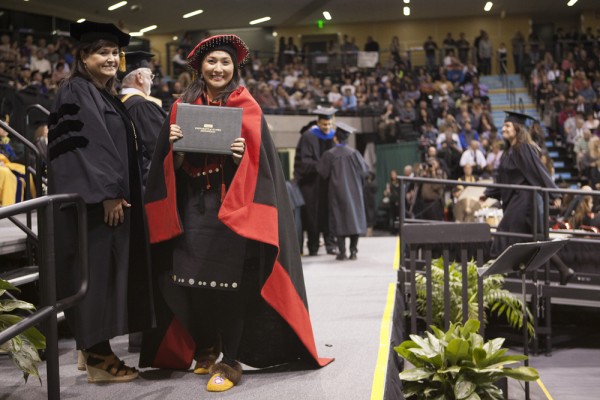 Crystalyn Lemieux celebrates after graduating in May 2015. (Photo by Philip Hall / University of Alaska Anchorage)

Racism and abuse in years past inflicted serious wounds on Alaska Native communities, and people now are still feeling pain.

"It's really easy to victim blame, easy to think there's something wrong with me," she said. "You have these negative mantras that go through your head: I can't do it, I'm not good enough, I'm not worthy. And so when someone tells you this happened, that redirects your way of thinking. It's not OK to talk to myself like that; it's not OK to hold those beliefs. You gradually pull yourself out with the help of a community."

Sewing is one thing that has helped Lemieux create and maintain a connection with Tlingit culture.

"Just this weekend I went fishing," she said. "Doing those things is sort of a healing process. Whatever you do in the physical affects the spiritual. I joined a dance group, because drumming and singing is like a prayer for indigenous people. It's a way to lift your spirit up, bring yourself into a balance. Making that effort to heal yourself is going to start affecting the people around you."

That concept of community is so crucial in Lemieux's life that she has a tattoo on her hand that illustrates it.

"The four paddles represent emotional, spiritual, mental, physical," she explained. "The canoe represents the community and the person on the back is the elder and he's guiding the boat. The elder, the adults, and the youth-they're trying to move forward and heal so they can get to where the sun is, to the other indigenous people, so they can all start working together."

A person choosing to lead a healthy life, become accountable and aim higher pulls everyone up, Lemieux said.

"It sets a standard," she said. "That was why I applied for the Fulbright, even though I thought, who am I to apply for a Fulbright? It's so prestigious, I don't think I could ever do it."

One of the reasons she applied was because of the people around her.

"They're hard core," Lemieux said. "They're applying for all these different things, so it just becomes this natural thing. It's just what we do. We hope for the best and if we don't get it, then we apply to another one. You just reach out to the resources you have, the people, and ask for help, or you've got to Google, or write 10 drafts of something until you're like, well, I've done my best."

Doing those things, she said, will reverberate into future generations.

"It's going to affect any kids or grandkids I have," she said, "because if I get further, that means they have a different starting point than I did. It's not about just getting this prestigious award. It's more like, how is this going to help my family, how's it going to help the community. My children and grandchildren are going to think, oh, this is normal: We apply to Fulbright awards. But if you didn't grow up that way, you're not going to do it. And then right there, the ripples? That's the impact I'll make."

"UAA Fulbright winner aims to connect Canadian students with their cultures" is licensed under a Creative Commons Attribution-NonCommercial 4.0 International License.