This image tops Eva Gregg's ePortfolio, where she describes challenges and successes in her life, from the personal and cultural to the academic. (Photo courtesy of Eva Gregg)

A trim hiker in black shorts and a blue sleeveless shirt stands atop a mountain, her arms raised in victory. This image literally headlines Eva Gregg's digital eWolf portfolio. That's her in the picture.

"I am a hiker!" she says emphatically to a small group of Alaska Native elders and community workers. "This is important to me. At one time, I weighed 252 pounds." Later in her portfolio, she writes, "I never thought in all my life that I would be conquering mountains...."

In fact, Wolverine Peak, a 10-mile hike that takes Eva eight hours, is her favorite endeavor. But highly popular Flattop eluded her for a long time. The last steep section to the summit terrified her, she said. Yet, after watching two disabled hikers and a toddler skitter up, she managed it. "There are no excuses," she says, laughing heartily. 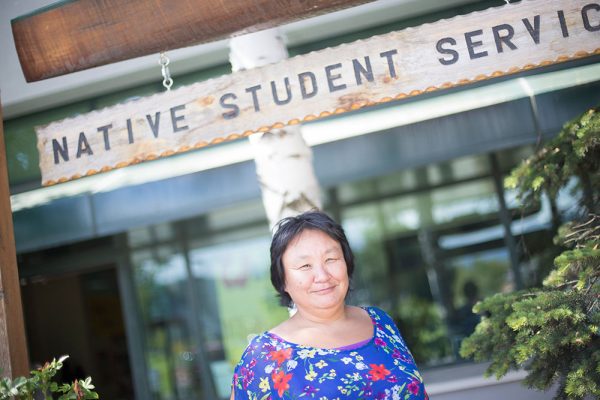 Eva Gregg stands before the Native Student Services center where she presented her Native cultural identity ePortfolio to a group of elders and community workers. NSS is working with community members to make this digital storytelling tool culturally relevant. (Photo by Ted Kincaid / University of Alaska Anchorage)

Kotzebue-born and raised, now age 49, Eva is the mother of four and a UAA college student. Flashing pages of her digital portfolio on a large screen, she demonstrated the different ways she has used this new tool to tell her own story, including her battle against obesity. Watch her presentation here.

Jeane Breinig, UAA's interim associate vice chancellor for Alaska Natives and Diversity, applauds the initiative. "Digital portfolios provide great potential for students to share who they are in their own words, and to connect with each other."

Just moments before Eva began to share her ePortfolio, Sheila Randazzo, transition advisor for Native Student Services, and Paul Wasko, coordinator for UAA's ePortfolio initiatives, teamed up to set the stage for what her audience was about to see. They hoped this gathering of wise and caring community members could hear the power in Eva's digital storytelling. And they hoped this group might help shape and frame this new tool-a Native cultural identity ePortfolio-for UAA's indigenous students to "understand and record their journey of becoming aware of who they are," as Randazzo explained. 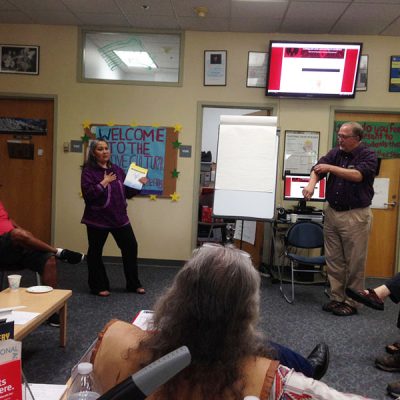 Specifically, the NSS team requested writing prompts from the community members to help students begin their ePortfolios and digitally document their identity journeys. As Wasko told them: "These are like chapters in a book. A blank page can be intimidating. But if this is my electronic book, I need a chapter on knowledge, on the physical, the emotional. Instead of financial, we might say provider. Can you give these students prompts for what needs to go on those pages?"

Beyond campus to community

"We need your wisdom,"  added national diversity advocate Tommy Woon. "This is a partnership with the community. We don't want to see it contained here, just on campus. Everything is connected. We are your servants and you are our board of directors."

Woon has worked a lifetime encouraging diversity at Stanford, Dartmouth and Naropa University, a Buddhist-inspired institution in Boulder, CO. One of the disparities Woon said he is sensitive to is seeing minorities left behind in the wake of major technological change. As he told the elders and community workers gathered, "We have had the agricultural age, the industrial age, the technological age. Now we are in the digital age. Whenever new technology comes along, it can deepen the gap between the haves and the have-nots, leaving them further behind."

Instead, he challenged, "Why not use it for liberation work? Young people doing digital work get more computer- and digital-literate. They can develop it and use it to get jobs."

But it can do even more than that, he said. Minorities can use it to explore and understand their cultural identities. Woon's Korean/Japanese wife's family experienced historical trauma dating back to World War II. "It is very personal to me," he said. "The sting of discrimination is still public in Japan."

So he envisions Alaska villages with their own ePortfolios. "Their stories can be archived. They don't have to rely on oral history. This can be their digital oral history. It can promote belonging, and point the way to resources when needed."

After an April visit to UAA, Woon began imagining this increased capacity. Relying on storytelling, shared wisdom and knowledge, this new technology actually could support the cultural resurrection of Native people. 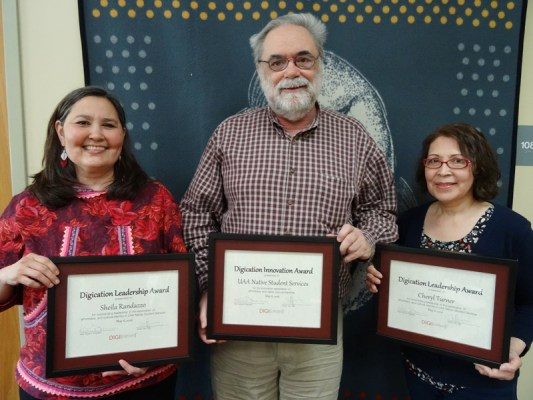 The cultural identity intiiative spearheaded at UAA has attracted national attention. Sheila Randazzo, Willie Templeton and Carol Turner with the Digication awards they received for their vision and support of how individual student ePortfolios can showcase Native cultural values. (Photo courtesy of Digication™)

"Technology can be used  in the service of closing the equity gap and healing and overcoming traumatic histories that continue to divide our world," he said.

From his days working at Stanford, Woon knows Helen Chen, director of that campus's ePortfolio initiative and a premier researcher in the field. She wanted Woon's take on how this tool could best be used by minority students. From all his work in diversity, Woon quickly imagined concentric circles: self, family, community, traditions, ceremony and the environment. "Have the students explore how they came to be through those things. Let them interview their elders, do their own research, and in those ways define themselves and document their journey," he told Chen. 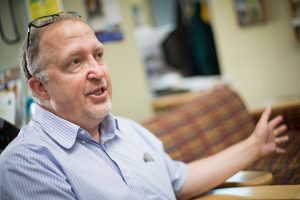 Wasko worked in Minnesota when the state decided to scale the ePortfolio concept. Every resident could have one. The goal was a kind of K-20 education-to-career personal learning tool and map. The goal: "If I am a student, how do I emerge from college into a job?" he said. "Or, if I am laid off, how do I track my way through getting more education so I can cycle successfully back into the work world."

Eva's ePortfolio is a window into how a truly authentic voice can emerge in a digital environment, and how she is able to capture so much more than her grades or job history. Her writing expresses personal validation for her successes, and honest acknowledgement of her obstacles and challenges.

Her opening page, called 'My Path,' addresses pivotal moments in her life. That time in fifth grade when she finally stood up to four class bullies. Her first alcoholic blackout in seventh grade. And the moment, 30 years later, when she publicly admitted, 'Hi, my name is Eva ... and I need help.'  She's been sober and clean since December 2009.

Decembers are big months for her, her story reveals. The very next one, in 2010, her best friend and the father of her daughter died. "I thought I would relapse...but I did not, which surprised me." 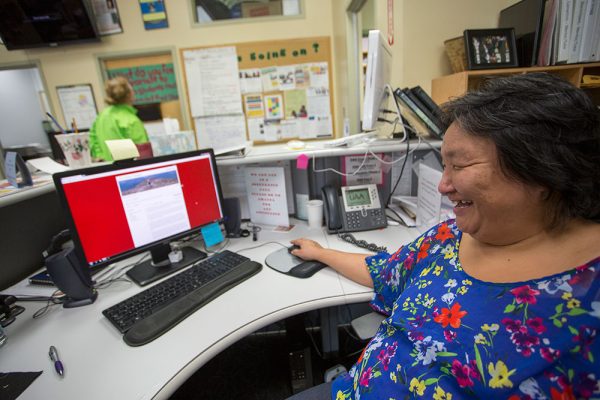 Eva Gregg, at work on her ePortfolio. (Photo by Ted Kincaid / University of Alaska Anchorage)

After two years in college, she has plenty of papers and math tests under her belt. Math has been a struggle. "I love math, don't get me wrong. It really makes me think. But it's time-consuming and hard."

What does she do when she gets stuck on a problem? "I watch YouTube videos on algebra, for hours. I watch the videos and then I go back to the problem." Only after exhausting all ideas and resources-from the videos to her class notes to the book's explanation, does she resort to asking for help. She might post the problem on Facebook, and query her several math-savvy cousins: "I am stumped guys," she writes. "Show me step one." Math will not defeat her. She knows that.

In December 2012, Eva wrote in 'My Path,' standing at her sink washing dinner dishes, she wondered how and why she'd managed to survive three decades of alcohol, drugs "and the trauma that goes hand in hand with that lifestyle." She decided, then and there, that she would spend her life supporting any addict willing to work as hard as she has for her sobriety. She's aiming for social work and human services degrees.

"I want to help people like me," she said later. "They know they are stuck in something and can't get out. If they ask me for help, I am willing to help them." She has found her way to solid self-worth and a satisfying career.