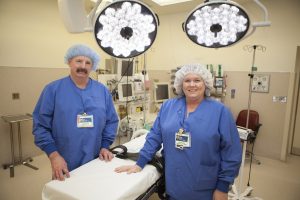 Surgical Technicians Curtis Phelps, on the left, and Kristi Brooks pose for a photo in a operating room at Providence Alaska Medical Center in Anchorage, Alaska Wednesday, April 5, 2017. (Photo by Phil Hall / University of Alaska Anchorage)

When Jerica Masangcay was a young girl, she would watch as caregivers took care of her grandmother, who suffered from pressure ulcers caused by obesity, thyroid problems and diabetes.

"They made her feel loved, dressed her many wounds with the most delicate touch, made sure she was comfortable and that her dignity was always a priority," Masangcay recounted. "From then, I always knew it was in my future to be able to provide excellent, compassionate care to those in need."

"I first became interested in surgery, and becoming a surgical tech, after I had numerous patients who were post-coronary artery bypass graft," she said. "I always wondered how the surgeon was able to take one artery or vein and attach it to another part of the heart, to make that heart pump and work as if it were brand new."

Masangcay considered going to nursing school, or becoming a radiologist, but what she really wanted was a career that would enable her to see surgeries up close and in person, rather than just seeing them online.

"I would be able to see how surgeons would tackle a high-stress situation or trauma, and to be able to be a part of that team, to help save lives," said Masangcay, a pre-major nursing student at UAA. "To be able to assist in salvaging, dissecting, attaching all parts of the body would not only be fascinating to assist with, but a great learning opportunity."

Masangcay is one of many prospective students who responded after hearing UAA had received University of Alaska Board of Regents' approval in March to create and launch a new surgical technology program. The Northwest Commission on Colleges and Universities (NWCCU) approved the program's accreditation in May, enabling students to be admitted into the program. Classes begin this fall.

An Alaska Department of Labor and Workforce Development survey estimates the need for surgical technologists will grow 13 percent by 2024.

While it's possible to recruit trained surgical technologists from Outside, the health care industry here in Alaska is realizing something construction industry leaders discovered nearly 20 years ago: recruiting locals to fill positions in Alaska is optimal since it's less certain that candidates from the Lower 48 will want to stay here.

"People can be seduced by the high salary, not knowing the cost of living here," Mandsager said. "We really need to recruit Alaskans."

According to Mandsager, the industry needed to have "skin in the game," so Providence approached UAA through the Alaska State Hospital and Nursing Home Association in an effort to learn more about what the university needed to be able to set up a surgical technologist certification program.

Working in concert with Mandsager, Dr. Jeff Sedlack, medical director of surgical services at Providence Alaska Medical Center, proposed the idea to the university of "growing our own" surgical technologists in Alaska. In his role at Providence and as a surgeon at Alaska Trauma & Acute Care Surgery, Sedlack was well acquainted with the state's limited number of surgical technologists.

He regularly rubbed elbows with them as they worked together in the operating room. Seeing the problem up close only heightened his commitment to increase Alaska's talent pool.

"Surgical technologists are a valuable part of the operating room team, and we face a severe shortage in Alaska," said Sedlack.

The idea of growing our own was born out of a project Sedlack worked on in conjunction with his selection for the 2015 Baldrige Executive Fellow's program. The nationally ranked leadership program fosters organizational excellence and helps leaders address unique strategic opportunities or challenges facing their organizations.

The practicums will be provided in partnership with hospitals and freestanding surgery centers through the establishment of memoranda of agreements. Clinical instructors and preceptors will support students at these sites, with UAA faculty working closely with them to ensure student-learning outcomes are met.

In addition to Providence, several hospitals such as Alaska Regional Hospital and Mat-Su Regional Medical Center have committed to ongoing financial support for the program through the Alaska State Hospital and Nursing Home Association, as have surgeons and anesthesiologists. Their support covers all remaining program costs not covered by tuition.

COH is also seeking program-specific accreditation for the new degree through the Commission on Accreditation of Allied Health Education Programs. Graduates then will be eligible to take the certified surgical technician exam.

"This builds off other things College of Health has done," Mandsager added, referring to COH's School of Allied Health, which offers programs such as dental hygiene and diagnostic medical sonography to prepare graduates for work in rewarding careers in Alaska's rapidly growing health care industry. COH also helms the UAA School of Nursing and University of Washington's Alaska WWAMI School of Medical Education, and partners with Idaho State University to operate a School of Pharmacy.

Some of UAA's prospective surgical-tech students, like Masangcay, already have a head start in their education.

"A lot of these people have been taking nursing prerequisites," Mandsager said. "Salary levels can be fulfilling. It's a career in itself, or a person can go on to other health care careers."

'This has opened up doors'

The new director of UAA's surgical technology program, Kristi Brooks, originally became interested in the medical field because her mother was a nurse. Brooks grew up in the small town of Ponca City, Oklahoma, where she worked as an emergency room admitting clerk.

"[I] just felt like I was at a dead-end job with no room for growth," she said.

She talked about her frustrations with a cousin who worked at a small bone and joint hospital in Oklahoma City. Her cousin recommended Brooks apply for a surgical tech job there.d

Brooks told her cousin she didn't have any training. "She said no worries, they will train you and teach you everything you need to know," Brooks said. "So I thought, what the heck, the worst they could say was no."

Brooks got the job. That was 30 years ago.

"They taught me every aspect of the surgical tech field and how to work as a team," she said. "That was so life changing for me. This has opened up doors I could never imagine. I am still scrubbing to this day, but in between all of that I started teaching a surgical tech program in Oklahoma."

Platt College, where Brooks began teaching, wanted her to be the director of the program, but she needed to be certified.

The college paid for her to complete an online surgical tech program. She took and passed the national exam to be a certified surgical technologist. Then, she earned an associate degree in applied science before accepting a surgical tech educator position at Providence.

"My plans for the future are making the UAA program the best surgical tech program that it can be," she said.