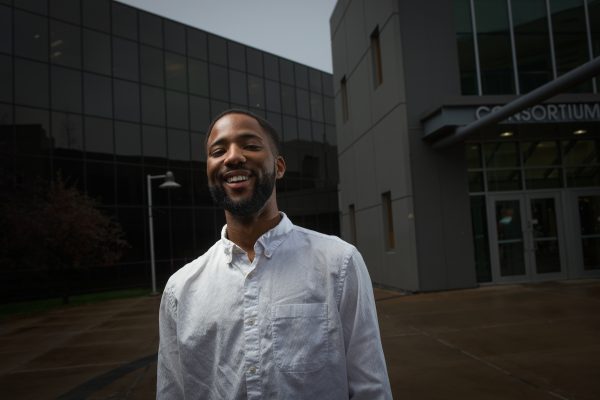 "I can't end up going a place not getting really involved in something," he said. "I always find myself busy."

Busy, for those who know Demry, is an understatement. If you've been a student in the last few years, you've surely seen him around. A member of Seawolf Debate, Model UN, USUAA and more, he's emceed talks for Bill Nye and Shaun King, hosted Q&As on campus with the mayor and announced names of half the graduates at the last several commencements.

Even if you don't recognize Demry, that's okay. He was behind the scenes advocating on your behalf as student ombudsman, too.

"I think UAA is definitely unique," he said. "The opportunities are seemingly endless. That's why I'm still here."

Demry hails from Texas, though he'd visited Alaska several times while his dad was in the military. He thought he'd attend a year at UAA before transferring back home, but then he got involved on campus and the place just stuck.

Demry first joined Student Activities, planning events to add to campus life. Next, he checked in with Seawolf Debate, which redirected his college career.

"I think the main things debate has given me are more opportunities to be of service," Demry noted. He switched his major from biology to political science and began coaching teams at middle and high schools across Anchorage. This year, he's focused on helping McLaughlin Youth Center develop its own debate program for incarcerated students.

"It just blew my mind how awesome these kids were. Awesome speakers and intellectual students who just wanted to be heard," Demry said of McLaughlin. "I knew that's where I wanted to dedicate a lot of my time this year."

Goings on about town

Demry's on-campus involvement frequently connects him with the community in some way. For example, as a member of Model United Nation's secretariat, he not only helped plan the statewide conference (hosted at UAA each February) but he also co-coaches the team from Bartlett High School.

Then there's a food justice class last fall, where he and his classmates took philosophy concepts from UAA to the kids at Mountain View Elementary. "Just being able to learn about food ethics in that way, and then being able to teach it was exactly what I want to see in every single class," he said (read more here).

And let's not forget his summer job as an AmeriCorps fellow at the mayor's office. Demry first heard of the opportunity through UAA. Along with justice and sociology major Sevy Sheppard, the pair crafted a survey on citizen safety concerns, then went door-to-door in Fairview to gather information on behalf of the Anchorage Police Department.

"It was really humbling. Being able to advocate for an entire group that I'd gathered this data from was just amazing," Demry said. "I can't even put a price tag on that type of feeling." 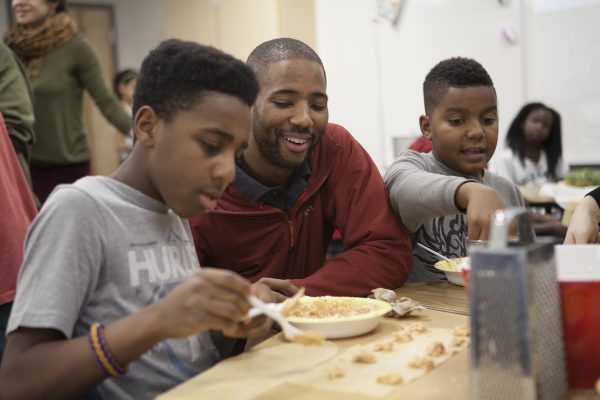 Advocacy is important to Demry, as evidenced by his two years as student ombudsmen.

The position in student government came about by chance. After Demry lost a bid to be USUAA president, the election winner asked if he'd serve as ombudsman instead. He admits he didn't know what an ombudsman was, but quick research proved it would combine his academic interests and debate skills as a student advocate.

"I would have done this. I didn't even want to run for president!" Demry said with a laugh.

As ombudsman, Demry met with the chancellor, provost and deans, and went to Juneau to advocate with legislators, too. Any student with any issue could come to him for support. Sometimes he'd get a call from a student at 3 a.m. Sometimes people would break down crying during his office hours because their academic path was in jeopardy.

"Being the person they're looking to for advising or advocacy, [that] was probably one of the most important parts of my being at UAA," he said.

So how does he keep all this organized? Meditation helps, he said. "If I don't [meditate] in the morning, then I'm just walking around like a zombie."

Humility is key, too. "I've failed along the way. I failed often," he remarked. But losing the USUAA election just led him to serving as ombudsman. Every opportunity is an occasion for growth.

"I've always felt the more of these challenges I take on, the more opportunities I have not only to give, but to grow as a person." A student can achieve personal growth at any university, he noted, but UAA provides a unique chance to grow in a city and community, too.

"Everything I've done, particularly with the debate team, those opportunities are not available at other schools," he said. "I would say the university is definitely the nesting place for all the opportunities I've gotten."

With only a semester to go, Demry is currently studying to take the LSATs, with law school plans in the future. "Ultimately I just want to be able to advocate for people, help people and grow every second of the way," he said.

Though he's been in the spotlight at UAA, Demry's experience doesn't have to be unique. He got involved, and the opportunities kept coming. If he's the face of the university at times, that's been the result and not the goal.

"I'm just a normal dude who meditates and helps," he said with a smile. "And sometimes the camera guy is there."