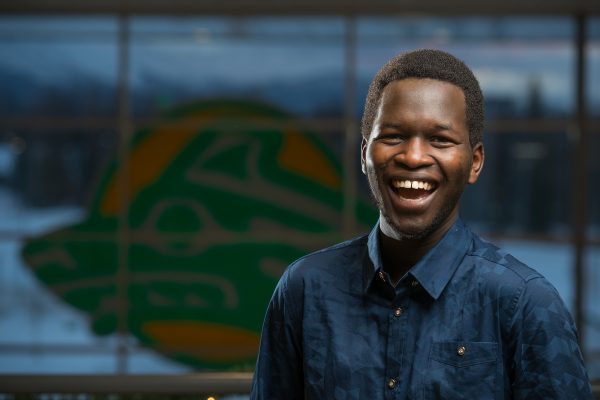 On Sunday, Dec. 17, 2017, Victor Samoei walked across the stage in the Alaska Airlines Center during UAA's fall commencement ceremony. The new mechanical engineering graduate looked out into the audience waving to his mother and father who had traveled halfway around the world from Kenya, Africa, to experience this moment. Victor's journey across the stage had begun about four years earlier with a dream of a university education, a running scholarship and a U.S. state about as far away as one could get from his home country.

In Kenya, Victor said many high school grads pursue a university education outside the country, with most applying to and seeking scholarships for schools in the U.S. His older brother encouraged him to pursue a running scholarship to pay for his education, and after high school, he spent two years training competitively so he would be a viable candidate when it came time to apply for college. Of all the universities he applied to, Victor said UAA was the most welcoming, responsive and easy to work with in getting the necessary paperwork through. Although Alaska, it turned out, was much different than he ever imagined.

"In the apartment at the training camp I was in, we had a map of the U.S., but Alaska was somewhere between Hawaii and California - so I was a little confused," Victor said laughing. "All the time I thought before I came here, 'Oh, it will not be too bad, it's not too far from Hawaii, it will be warm.' When I landed here, it was a different story."

He landed in Alaska in spring, when there is still snow on the ground and temperatures still dip into the 20s. It was a bit of a shock, and not just the weather, but everything from the environment, to the people and the culture. He said it took some getting used to and he's grateful that he had a team and coaches to support him, show him the ropes and make him feel a little less like an outsider.

"When I came from Kenya, I knew that I wanted to do engineering - I was so prepared to go into that - it was my dream," Victor said. However, after taking the mandatory Accuplacer Exam, he was ranked in the lowest category and was required to take a year of introductory college courses. It surprised him and he felt disheartened about not being able to dive into his degree right away. "I started from the bottom and it took a while, just trying to get through those classes."

But Victor persevered, determined to make his engineering dreams a reality.

"When I came I was a student-athlete and I had my fellow athletes - my team - as my backbone," Victor said. It was this cross country and track team, many of whom are also Kenyan, that provided the support and community Victor needed to get through his freshman year and beyond.

"We all lived together and one of them, Micah [Chelimo] was doing engineering and about to graduate, and helped me big time," he said. "He helped me with all those little baby steps with engineering [school] and helped me paddle through."

As his time at UAA went on, Victor started to feel settled and more comfortable and confident in himself and his surroundings, and finally, Alaska started to feel like home.

About this time, during his second summer of classes, Victor made an accidental discovery that changed the course of his UAA experience - one that he is forever grateful for.

Leo Medal, the Multicultural Center's student success coordinator, noticed Victor and struck up a conversation with him. The two got to know each other and Leo introduced him to the staff, who Victor said welcomed him into their community and network. Besides taking summer classes, Victor was also on the hunt for a job - and Leo came through again, hooking him up with New Student Orientation. He spent the rest of that summer helping new students get oriented with campus, and after that he never looked back. For the rest of his UAA career, he was involved in some capacity with UAA's Multicultural Center. About his junior year, a new program and opportunity opened up.

"They started the Seawolf Success program and I was one of the first mentors," Victor said of getting involved in the new program. "I was asked if I wanted to be a mentor and I said, 'Yeah, sure!'"

Victor was perfect for the job because he could empathize with new students who struggled the same way he had when he first transitioned to UAA. He understood the rollercoaster year a freshman goes through, navigating a new environment and responsibilities while trying to take a full load of classes.

"It was such a good experience and I got to work with new students who were just like me, trying to figure out everything," he said. "Which was good, because I knew all the tricks. I had five mentees I was working with and helped them with everything from scheduling their classes to showing them around campus."

He said the first semester he worked with his five mentees, he spent a lot of hands-on time with them, answering questions, showing them the ropes of college life and helping them get oriented with UAA's layout. By the second semester, his mentees started needing him less and were "ready to fly away and grow."

"They transitioned well and they didn't struggle a lot," Victor said. He was happy he was able to provide the support they needed to become successful at UAA. "I think this program is the best one so far from the Multicultural Center, because so many people come, just like me and need that help, but might not get it. The program is great because it provides help at the right moment when it's needed." 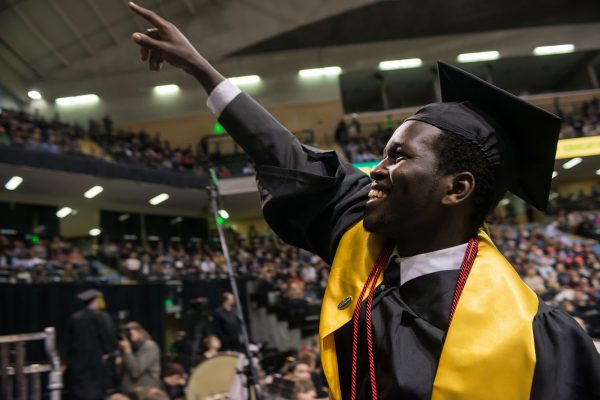 As Victor walks across the stage at UAA's fall commencement ceremony, he looks out to the crowd at his cheering parents. (Photo by James Evans / University of Alaska Anchorage)

Looking back, Victor acknowledges that he had a rough start. His freshman year was difficult and the transition from Kenya to Alaska was not an easy one. But his experience at UAA's Multicultural Center and the support and opportunities to get involved as a student is what got him through.

"Everything started working well after I got involved in school," Victor said. "I can't imagine how students, especially ones from other places, find their way because it can be really hard - even when you have a lot of people around you."

But, that's why Victor is such a big advocate for the Seawolf Success program. He's seen firsthand how the program provides much-needed support for new students at a critical time. Whether they're from Alaska or from halfway around the globe, having a mentor to look out for one's well-being during those first years at college is critical to success, Victor said.

As for his plans now that's he's graduated?

He's off to graduate school in Ohio to join his brother and pursue his master's in mechanical engineering. He has plans to work in the automotive industry and the Buckeye State seemed like a good place to start.

Although Victor's headed out of Alaska after the new year, his UAA experience and the lessons he learned in and out of the classroom he'll carry with him.

"Being a student-athlete and a full-time engineering student, it was serious business, but a good experience," Victor said. "I'm proud of my degree and of my time here."

"Lending a hand: How mechanical engineering alumnus Victor Samoei paid it forward through the Seawolf Success program" is licensed under a Creative Commons Attribution-NonCommercial 4.0 International License.