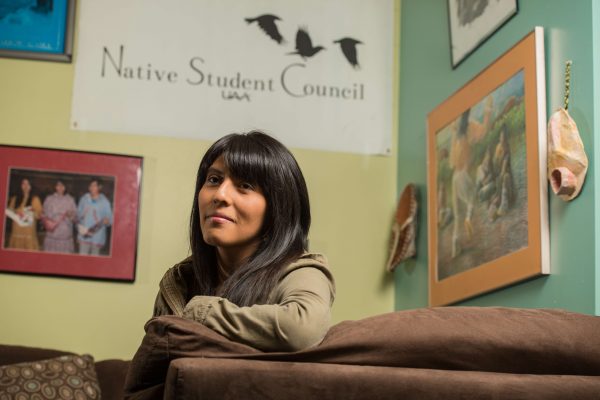 Allison Castillo poses in the Cama-i Room in UAA's Edward Lee Gorsuch Commons, which serves as the meeting place for the Native Student Council. Allison was a very active member of the council and began her graphic design career by creating their logo. (Photo by James Evans / University of Alaska Anchorage)

More than 6,000 miles separate Peru from Alaska. With that much distance, you wouldn't expect to find many similarities between Peruvian and Alaska Native culture, but '17 art alumna and award-winning graphic designer Allison Castillo is happy to educate you.

Born in Cusco, Peru, Allison and her twin sister were adopted at six months old and raised in Anchorage. A lifelong artist - a characteristic she picked up from her adoptive mother - her body of work takes inspiration from the two cultures' close resemblance to one another.

"Both cultures are very respectful of the land and people, and that's something I'm drawn to," explains Allison. "We're not the only people on this earth. There are animals and plants. Getting in touch with that is very valuable, and their art draws from those aspects."

Allison wasn't always so sure if and how she was going to use her artistic passion. Hoping to figure out what she wanted to do, she started attending UAA in 2009 and graduated with an associate degree in art in 2012.

Despite that achievement, Allison still wasn't convinced that a career in art was something she wanted to pursue. However, the drive to find her path remained, and she went back to UAA in 2015, this time to work toward a second associate degree in digital art and graphic design.

Allison credits two events with helping her realize how to utilize her creativity. The first was enrolling in a beginning graphic design course which developed her skill set and left her with inspirational advice.

"Learning the programs was so frustrating, but I was challenging myself and enjoying it at the same time," describes Allison. "The teacher was very patient and knowledgeable. One thing he said was to just take chances. You're going to fail sometimes but that's part of the journey."

The second key event was joining the Native Student Council. At that time, Allison wasn't fully aware of how alike her Peruvian heritage was to Alaska Native culture beyond their aesthetic similarities. Upon joining the council, she found a welcoming group who shared her enthusiasm for exploring cultures.

"I became more knowledgeable and that's when I found a lot of the similarities between the two," she explains. "Being in the club allowed me to become more accepting and more interested in other cultures in general."

Allison's year of rediscovery culminated in the first stepping stone toward her new career path. The skills she picked up in her graphic design course coalesced with her being asked to develop an updated logo for her friends at the Native Student Council.

"That first logo design was me getting out of my comfort zone and taking my professor's words into action. To this day they still use that logo and it is one of my proudest pieces," she describes. 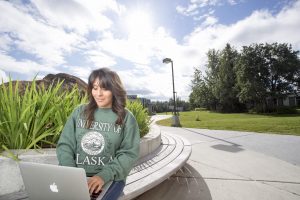 After graduating later that year with her second associate degree, Allison dove into graphic design by interning at ad agencies around Anchorage. While she gained valuable practical experience while growing her skills, each agency recommended that she go back and finish earning her bachelor's degree.

For Allison, the choice to go back was a complicated one.

"It was an internal struggle," she says. "I felt like I needed to go back on my own terms and not because someone told me to. Validation is something that has to be given to yourself."

Allison decided to go back to UAA for her bachelor's degree in 2016, not just for herself, but also for her mother who had recently become sick. As the main influence for her cultural and artistic passions, Allison felt that it was important to give back to her mom peace of mind that her daughter would be okay.

"It became a motivator to keep doing well in school and finish strong so she could see me graduate and be secure in my future," says Allison.

In 2017, Allison received her bachelor's degree in art with her mother proudly in attendance. But her accomplishments didn't end there.

Echoing her professor's advice, Allison put herself out there as a full-fledged graphic designer. One of her clients - her former high school teacher and co-owner of Kobuk Coffee in Anchorage who she ran into on the street - hired her to design a suite of updated product labels. One of the labels would go on to win an award in the promotional design and advertising category in AIGA Alaska's annual design competition.

"It meant a lot to just submit something and get my work out there, so that was really rewarding."

After being able to witness both of her daughters graduate and launch promising careers, Allison's mother passed away in February 2018, her love of travel and the arts living on through her children.

"I'm just so grateful that I had her as a mother and that she was able to see my accomplishments," says Allison. "I would always share my art with her and she would give me feedback. I look back on those projects and go, 'she was able to see this and now it has a little bit of her.'"

"Art grad finds inspiration all around the world and close to home" is licensed under a Creative Commons Attribution-NonCommercial 4.0 International License.