Inupiat artist and UAA alumna works to bring back our stories 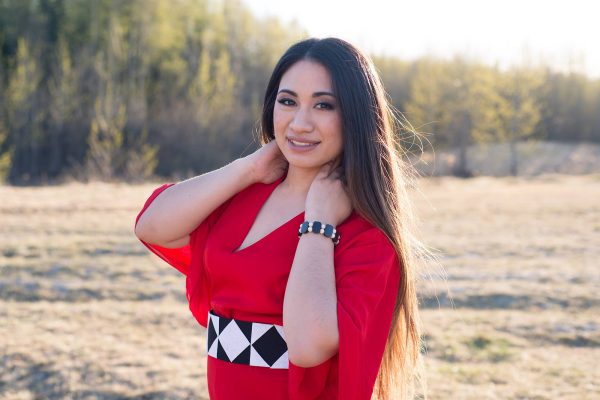 These three concepts form the cornerstones of Britt'Nee Brower's art, whose Inupiat-infused work ranges from canvas paintings, customary tattoos, digital logos and three-dimensional wire sculpting. By reconciling her heritage with contemporary trends, Britt'Nee aims to revitalize the traditions of her people for future generations.

While Britt'Nee's portfolio possesses the maxim and scope of a long-established artist, she wasn't always confident that her lifelong talent could be used for anything other than fun.

"The first thing I'd go for at daycare were the colored pencils and I'd just color all day," she says. "Then I got into doodling, then collage making and then Photoshop. I've always been artistic in one way, shape or form."

After graduating from high school a year early, Britt'Nee moved to Anchorage and immediately started attending UAA. She decided to take a break from art, initially believing that "art can't pay the bills." Britt'Nee instead focused one of her other passions: helping people.

Britt'Nee graduated with her associate degree in occupational safety and health in 2013. In the years to follow, she's put her degree to good use as a safety professional at various Alaska Native corporations, including Kaktovik Inupiat Corporation (KIC), Arctic Slope Regional Corporation (ASRC) and Alaska Native Tribal Health Consortium (ANTHC).

Britt'Nee's artistic comeback kicked off after joining the Leadership Anchorage group. During an introductory exercise, she was tasked with taking stock of all the components that make up her identity. Her interest in art reignited.

"I remember creating this quadrant about ourselves - what is our culture, our values, our passions, our family?" she describes. "I broke it down and I really focused on the passions aspect. Then I decided I should get back into art."

Participants of the leadership group were also encouraged to seek out a mentor. Britt'Nee already had two in mind.

Her first mentor was a coworker at ANTHC and fellow artist who designs traditional Alaska Native clothing. After connecting with her, she advised Britt'Nee to ease back into creating by starting an Instagram page for her art.

"She was always in the back of my mind and I decided to reach out to her," says Britt'Nee. "She suggested I try one of those 100-day drawing challenges, so I started out with that. I wanted to stay focused on my culture and do Native artwork, so I decided to do 100 drawings, one a day."

While Britt'Nee's first mentor pushed her to simply being creating again, her second mentor suggested that she continue to grow as an artist by returning to UAA, but this time to pursue a degree in art.

"I always wanted to go back to school, but my workload was chaotic," explains Britt'Nee. "I decided to take a leap of faith. It worked perfectly where I could work full time during the day and take evening classes. The workload felt minimal because it was everything I do in my spare time. This was my hobby, and I can get graded for this?" 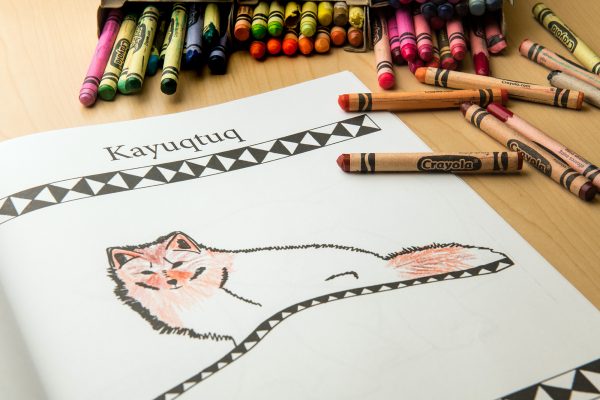 In addition to inspiring her to go back for her bachelor's degree, Britt'Nee's second mentor gave her the idea to collect her Instagram drawings in a coloring book, noticing that many of the drawings she posted were black and white and featured animals.

It was an idea that aligned perfectly with Britt'Nee's artistic mission of cultural revitalization, especially in the area of language preservation, which is a topic that resonates with her.

"I remember when we would visit my akka [grandma] and she only spoke in Inupiat, so there was always that language disconnect between me communicating to my grandma. I'd have to tell my dad to talk to her and she would respond and he would translate in English to me. That moment was like somebody just took your tongue away from you," describes Britt'Nee.

She continues, "Even learning at a younger age is tough because you still have to be constantly conversing with somebody. My daughter is at that age but she's not exposed to her culture here in Anchorage. In Barrow we had Inupiat classes in elementary school to middle school. So I thought maybe the coloring books can teach them?"

Through her mentors, Britt'Nee was able to tap into her growing network of fellow Alaska artists for referrals to produce her coloring book. Eventually, her project attracted the attention of her Native corporation, the Ukpeagvik Inupiat Corporation (UIC). They offered to help sponsor the coloring book, essentially putting it on the fast track to production. 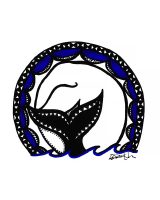 Titled Kivgiq, it is featured on the back cover of the Names of Animals coloring book. (Photo courtesy of Britt'Nee Brower)

Since releasing the Inupiat Coloring Book: Names of Animals, Britt'Nee has seen orders go out to several schools around Alaska, as well as to a handful of classrooms in the Lower 48 and even one to New Zealand.

"It's so cool that they're actually using it. I'll see my friends' kids and they'll send me pictures," shares Britt'Nee. "I've got to hand it to my daughter though, she's my biggest advocate. She'll say, 'This is my mom, and she's an artist."

Most people might decide to rest on their laurels after completing such a well-received project. But looking ahead, Britt'Nee has no shortage of endeavors to keep her busy, including preparing for exhibitions, teaching workshops and applying for fellowships.

One of these projects include a partnership with the Girl Scouts of Alaska to produce new coloring books featuring more Alaska Native dialects. Britt'Nee hopes this gives her the opportunity to collaborate with more Alaska Native artists around the state to form a greater effort to preserve all indigenous languages.

All the while, Britt'Nee still makes time to develop her artistic skill set. Over the summer, she began working as a tattoo apprentice to learn more about traditional Alaska Native ink methods and design, as well as started researching more about her Hawaiian heritage with the intention of one day fusing both cultures in her artwork.

This fall, Britt'Nee's schedule will become even more crowded. As she continues pursuing her bachelor's degree in Native arts, she anticipates experimenting with woodcarving, sewing and ceramics. Britt'Nee's hope is to develop as much she can as an artist before honing in on the areas where she truly excels.

"I can't wait to use my newly-gained skills from UAA for a greater purpose than myself."

Purchase your copy of the Iñupiat coloring book Names of Animals at Britt'Nee's website here.

"Inupiat artist and UAA alumna works to bring back our stories" is licensed under a Creative Commons Attribution-NonCommercial 4.0 International License.