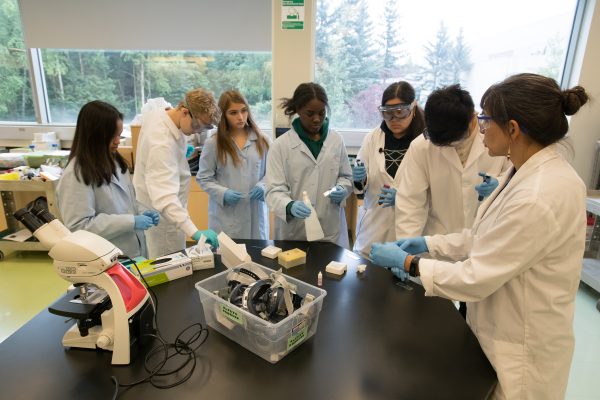 In a laboratory on the second floor of UAA's ConocoPhillips Integrated Science Building (CPISB), 10 high schoolers are whisking around the room in white lab coats and clear goggles. They're hustling to clean up their workstations because their instructor, Assistant Professor of Biological Sciences Dr. Kathryn Milligan-Myhre (Dr. Kat for short), just announced they'll be taking a pop quiz. Surprisingly, these teens, participants in the Della Keats Health Sciences Summer Program (Della Keats HSSP), are unfazed and the lab falls quiet with just the soft scratching of pencils scribbling in unison.

"The aim is to help students who are interested in a health career - whether that's medicine, nursing or anything else - and to have the ability to turn those dreams into reality if someone opens a door for them," said Dr. Ian van Tets, associate professor of biological sciences and Della Keats HSSP's program director. "We're looking for talented, motivated kids from underserved and underrepresented backgrounds."

The Della Keats HSSP program was created under the umbrella of the university's WWAMI School of Medical Education and is open to talented high school juniors and seniors who come from Alaska Native, rural Alaska or other backgrounds that are either underserved or underrepresented in the health professions. The students live on UAA's campus while attending the six-week program. While on campus, the teens are introduced to a wide range of health-related science classes, have the opportunity to job shadow with local health professionals and experience a snapshot of what college life is like in the big city. 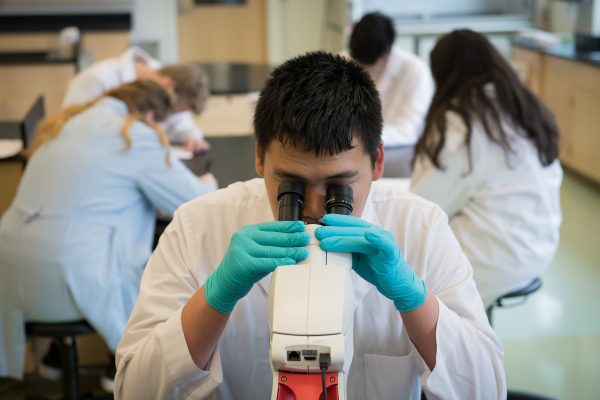 Moses Wiseman, from Chaputnguak School in Chefornak, works on a micro and genetics lab assignment. (Photo by James Evans / University of Alaska Anchorage)

This is not your typical summer camp either - there's homework. In addition to studying in the evenings, students work in teams to complete a research project. At the end of camp, they're assessed by the instructors and can earn up to half an elective credit for their work. Thursday evenings are dedicated to pizza and a video - an educational one, van Tets said, laughing, but it serves as a little bit of social time during the week. The weekends are reserved for adventurous off-campus excursions like kayaking or hiking.

"We want them to maintain friendships," said van Tets. Many of the students who've gone through the program remain friends, keeping in touch once they come to UAA. "They connect on social media, tell each other about other scholarships and programs." For a while, UAA had a student club started by Della Keats HSSP participants, and over the years a few Facebook group pages have popped up from previous cohorts. Eventually, van Tets said that once the students move on, the clubs and social pages disappear, but for that critical time, between transitioning from a rural high school setting to UAA's urban campus, the teens are there for each other and create a community.

"We accept 20 medical students a year into WWAMI; it's not easy - there's a huge attrition rate - but for the last four or five years, we've had at least one Della Keats student make it into that group on merit," said Van Tets. "These are high school kids from disadvantaged backgrounds who are getting into WWAMI and other M.D. programs. So we have that high success - I think every person in our program has at least gone on to college." Although not all Della Keats HSSP students head into a medical degree track, many of them land somewhere in the broader medical field.

Milligan-Myhre, who has spent the past couple of summers as an instructor with UAA's Alaska Native Science and Engineering Program (ANSEP), was excited by Della Keats HSSP's focus on introducing the medical side of science to Alaska Native students.

"I think when you diversify for both research and medical schools, you have people with different backgrounds looking at the same questions," she said. "We tend to treat research and the medical field from only one point of view and we need diversity in those points of view."

Milligan-Myhre is originally from Kotzebue and earned her Ph.D. in microbiology out of state - something she hopes will change for future Alaska Native students. She sees the value in programs like Della Keats HSSP and ANSEP to encourage Alaska Native students to explore careers in math, science, engineering and medicine, to not only help diversify the workforce but to expand thinking in how those fields tackle problems. But she realizes this takes time and it all starts in the lab. 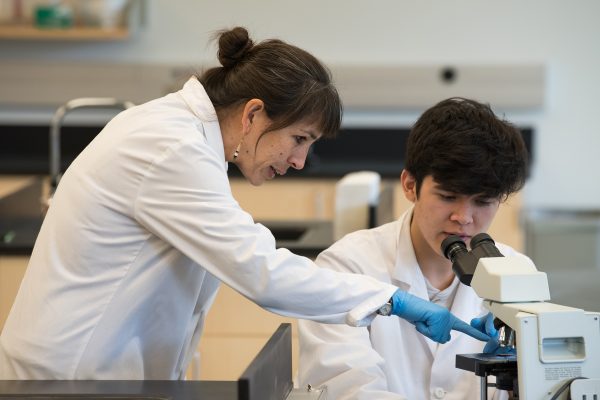 "I think one of the best ways to get students interested in microbiology is to get them interested in microbes," said Milligan-Myhre. For many of the high schoolers, this course is their first introduction to a high-level science course - or any course that could be part of a pre-medical curriculum. "I give them the basics and I tell them when they take this class as an undergraduate, that 'you are going to learn much more.'"

LiJo Wilson, a 17-year-old senior from Juneau said that growing up she'd always been interested in and around the medical field. Her grandmother, who was a nurse, largely influenced her interest in the field.

"Growing up, my grandma always told me how she enjoyed the medical field and helping people - all of her stories she told me were just incredible and amazing, so that's what really got me into it," Wilson said. Her grandmother imparted on Wilson her traditional medical wisdom as well, teaching her how to heal cuts, bruises and abdominal pain by making her own medicine with herbs.

"This has been a great opportunity; you don't get to do this hands-on work in high school," she said. "Being here gives you a bigger mindset." Wilson plans to attend UAA when she graduates and wants to stay in Alaska. She doesn't think there's enough Alaskans in the medical field, especially when it comes to women's health - her plan is to eventually become an OBGYN.

For Konaa Tallman, a 17-year-old going into his senior year at Dimond High School, he is at a crossroads in his life. Does he want to pursue engineering or a medical degree?

At 17, he's already earned 58 credits at UAA toward a mechanical engineering degree and has completed a math minor. But despite his accelerated academic track, he wanted to participate in the Della Keats HSSP to explore the field of medicine.

"Contrary to everyone else, this was something that I was never exposed to in high school," said Tallman. Dimond High School is known for their highly competitive robotics program, which Tallman said he's spent a lot of time participating in. Admittedly he says he kind of "nerds out" on science, but the medical field is foreign to him.

"I'm a very hands-on, visual and physical learner - I got to hold a human brain," he said excitedly. Additionally, he and his cohort dissected sheep hearts, worked in the SIM Lab, earned their CPR certification and job shadowed medical professionals from physical therapists to pharmacists.

Is Tallman any closer to making any decisions on his degree path? Not yet. But participating in Della Keat HSSP has definitely opened the door wide open to the possibilities of what lies ahead.