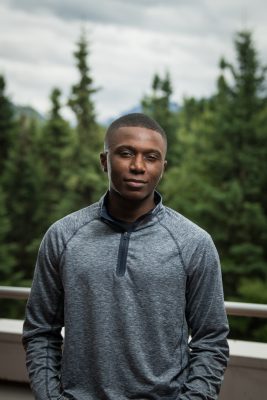 Michael Lowe has grit. The UAA political science senior and national defense and strategic leadership (ROTC) minor is no stranger to perseverance and hard work. As an infantryman in the Alaska Army Air National Guard, he knows how to focus on the task at hand, tackles it head-on and achieves his goals, which is what made him the perfect candidate to receive the 2018 Harry S. Truman Scholarship.

Lowe is this year's only UAA Truman Scholar and was one of 59 students selected from 52 higher education institutions across the country to receive the scholarship. The scholarship was created by Congress 40 years ago to support those who seek to answer the call of public service and leadership. Which is right up Lowe's alley - public service is exactly the line of work he sees himself getting into once he graduates from UAA.

Lowe has always strived for academic excellence, dedicating much of his time to his studies. He has a passion for learning, whether it's through a structured class or just on his own, which is what led him to two choices when deciding what major to declare at UAA: psychology or political science. As a freshman, he went with psychology but quickly changed to political science. Lowe had received a number of scholarships, including the Alaska Performance Scholarship and for his work in the Guard, but with the stipulation of graduating in four years. Although psychology was a subject he was interested in, he ultimately opted for the poli-sci track to keep on his four-year graduation timeline.

"I didn't really have a problem with switching - I was kind of having a tough time deciding between the two," said Lowe of choosing his political science major.

The road to Truman

"Last semester I took a course with Professor [Forrest] Nabors and he recommended that I do an internship in Juneau," Lowe said.

He spent the spring interning with House Majority Leader Chris Tuck and even had the opportunity to work on a resolution that passed both the Senate and the House.

"I had to submit a policy proposal [for the scholarship] and mine was on Arctic infrastructure and defense capabilities since more activity is going to be happening in that part of the world as ice retreats and more tourism opportunities open up," said Lowe. "I was working in the Legislature while I was writing this and turned it into a resolution. It was pretty cool taking the policy proposal I had written for Truman and then translating it into actual legislation."

The internship in Juneau was a glimpse into the career he's been dreaming about since high school, and he was grateful for the experience of living and working in Juneau.

Additionally, while Lowe was taking a full course load and interning in Juneau, he was working closely with his Truman Scholarship advisor James Muller, a professor in the political science department, who Nabors had connected him with after he expressed interest in applying for the scholarship. He and Muller worked on crafting his personal essays and working on the required policy proposal applicants must submit. Lowe said it was a time-consuming process and is thankful that Muller was dedicated to helping him achieve his goal.

"It was a lot of work - a lot of extraneous writing," said Lowe. "I wanted to be thorough and dedicated a lot of time to writing and editing. Professor Muller spent a lot of time helping me edit."

In the end, Lowe's hard work paid off, and on an ordinary day in the office, he was invited to a staff meeting in one of the conference rooms. The usual staff was present, including Majority House Leader Tuck. Lowe, with pen and paper in hand to take notes, didn't really think anything of it.

"I was the only one sitting there with a notepad and there was a phone on the table, which was weird, and it rang - it was Chancellor Gingerich," said Lowe, who said he still hadn't put it all together because Representative Tuck receives phone calls from many high profile people from all over the state. "Then he [Chancellor Gingerich] said my name and said he wanted to congratulate me on the scholarship. I was smiling and we had cake to celebrate, which was fun."

Truman Scholarship recipients receive $30,000 to put toward a graduate school program and have the option to apply for additional funds from university institutions and programs that have committed to matching, or covering the cost of attendance for Truman Scholars, like the Woodrow Wilson School of Public and International Affairs at Princeton University, which Lowe said he is interested in attending.

Additionally, he said, that after completing his graduate or doctorate program - if he chooses to continue his education to obtain a doctorate - he is required to give three years of public service within seven years of his graduate or postgraduate graduation date.

"Right now I'm looking at applying to programs in the United Kingdom," said Lowe of his plans after graduating in December. "I also have some military obligations to fulfill post-grad, but I'm looking to eventually get my Ph.D. using the Truman Scholarship."

For now, the door is wide open for Lowe. In the future, he would like to land somewhere in the realm of public policy, perhaps working at a think tank like the Brookings Institution, a Washington, D.C. nonprofit focused on public policy research, or at the Council on Foreign Relations. And even further down the line, Lowe sees himself returning to academia as a university professor, but really, the sky's the limit at this point.

"I'm really at a crossroads, whether I want to be a thinker or a doer," said Lowe. "The Ph.D. route is more the thinker, but the master's is more the doer. The way I see this is, that I have the Guard on one hand and I can pursue a Ph.D. and have the best of both worlds - that's how I'm trying to bridge those two."