A lab of her own 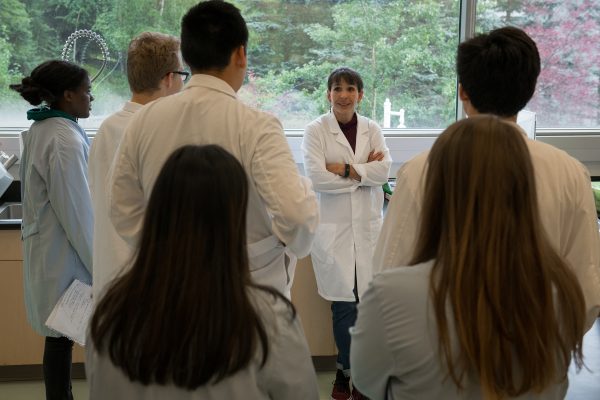 "When I graduated from high school in Kotzebue I didn't really know what was out there for job opportunities, so I went with what I knew," said Kathryn (Kat) Milligan-Myhre, UAA assistant professor of biological sciences. "What I knew was tourism - because Kotzebue has a booming tourism industry - so I went to Cornell for hotel administration."

A year into the program, Milligan-Myhre decided hotel management was not for her, returned home and came up with life plan B. While living at home, one of her four jobs was working as a nursing assistant and that's when brilliance struck - medicine.  Not only did she enjoy her nursing assistant job, she was good at it and could see herself in the medical field long term.

She applied for nursing school, but life threw her another curveball and she was diverted to Wisconsin to help care for her grandmother. So on to plan C. Milligan-Myhre scratched nursing school and opted for a pre-med program at the University of Wisconsin, Madison. It was life plan C where Milligan-Myhre found her niche and discovered her passion for medical research. She would live in a few more states, have a few more life experiences, but eventually, all roads pointed home - back to Alaska - where she's landed with one foot in academia and the other in research.

The daughter of a high school teacher mother and a subsistence and commercial fisherman father, Milligan-Myhre spent her childhood growing up in Kotzebue experiencing a blend of both her Inupiaq and Western heritages. In the summers, she spent her time fishing with her father and attending Camp Sivunnigvik, a weeklong camp for Alaska Native youths to immerse themselves in their language, culture and traditions. She would also head to the Lower 48 to visit her grandparents in Wisconsin and experience the Midwest heat.

"I was lucky enough to have this life, but as a high school student, I never realized that," recalled Milligan-Myhre. "I got to go up to camp and help bring home subsistence meat to have year-round and was extremely lucky - I really didn't know how lucky I was."

For Milligan-Myhre, once she graduated high school and left Alaska, hindsight would become 20/20. She quickly realized how much she missed her home state and community in Kotzebue, and how unprepared she was as a college freshman. It would be more than two decades before Milligan-Myhre would have the opportunity to return home.

"We had a lot of really dedicated teachers at the time, who were working really hard for us," she said. "But they didn't offer calculus, or anything other than general chemistry - I know I was not prepared that first year. Growing up in Kotzebue, we didn't really get an education that prepared us for college, or supported our traditional lifestyle." 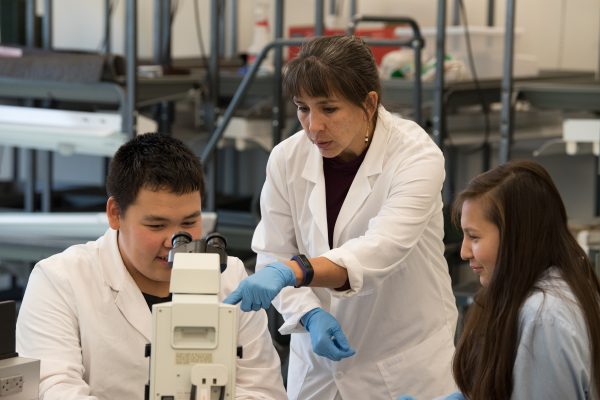 Milligan-Myhre said that in the subsequent years following her freshman year at college in Madison were hard. Although there were Native American students on campus, in addition to clubs and organizations, she often felt disconnected from the rest of her Native American classmates, because she was the only Inupiaq. There was no one else like her on campus who could relate to her. She was 12 years into her studies in Madison before another Alaska Inupiaq attended the school.

But she persisted, and despite feeling detached from her life in Alaska, she was forging her own path in the lab. It surprised her to learn that her love of research could be turned into a career.

"It was heartbreaking working in nursing homes or hospitals where you just saw people at their worst all the time," Milligan-Myhre said. "I thought I could help more people as a researcher than I could as a doctor - I could make strides in research and help generations of people."

As indigenous and Western cultures continually intersect with each other, and more students of Alaska Native heritage find their way to scientific areas of study, Milligan-Myhre said more needs to be done in opening the gates to the field of medicine. Which is why, when the opportunity arose to return to Alaska and work at UAA, she jumped at the chance.

Part of the reason for her returning to her home was to help mentor Alaska Native students, which she has done as an ANSEP instructor for the past couple of years, and this past summer she participated in the Della Keats Health Sciences Summer Program. The other reason goes back to her academic roots - research.

"There's so much research potential here and I feel like we're missing out as a research community because we're not taking advantage of the fact that we have diverse climates, animals and microbes - we have all of these different things," said Milligan-Myhre. "Right now they're being explored by a handful of folks from the Lower 48, but this is something our students, that know the best."

This mainly ocean (but also found in freshwater) fish, evolved with unique characteristics after the last Ice Age, which sets them apart from other fish species and lends themselves perfectly to scientific study - particularly when it comes to genetics.

"They're found all over the Northern Hemisphere and there are many different populations of these fish, found in different areas, that have the same genetic diversity between populations that humans have," said Milligan-Myhre. "We can use them as a model to study human diseases."

Because of the stickleback's enormous diversity within its own populations - similar to humans - researchers can ask big questions like, how does the host's genetics contribute to host-microbe relationships? In other words, how might a person's predetermined genetics affect the relationship of the millions of microbes living in our bodies? Or, does our environment contribute to our relationship with our microbes? Stickleback can help researchers answer some of these big biological questions to help solve some of medicine's puzzling answers when it comes to curing diseases plaguing the human population. 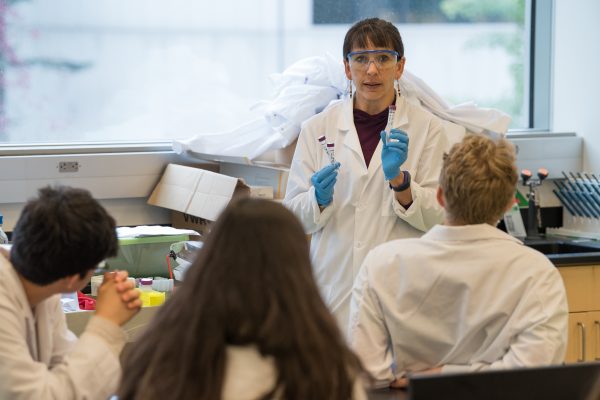 Milligan-Myhre believes there needs to be more opportunities for Alaska Native youth in the areas of medicine and medical research, which is why she instructed the micro and genetics course this summer for the Della Keats Health Sciences Summer Program. (Photo by James Evans / University of Alaska Anchorage)

"The whole reason we're studying all this is that we're interested in this big overall question of how genes and environment contribute to inflammatory diseases," Milligan-Myhre said. Inflammation is the body's immune response to fight infections, heal wounds or damaged tissue and without it, the body cannot protect itself from disorders like asthma or inflammatory bowel disease to more painful disorders like arthritis. Milligan-Myhre loves her lab work and the comprehensive approach stickleback research has and how it gives her and fellow scientists a bird's eye view of the problem.

"This is really systems biology," she said. "We're looking at the microbial community, the host, several different aspects of the host, including development and immune response - it's an overall view of how all these things interact with each other."

Milligan-Myhre's research with stickleback - solving medical issues from an overall viewpoint - is a metaphor of how she feels about academia and the medical and research communities. She believes there needs to be more inclusiveness of all cultures and backgrounds, and in our state, of traditional Alaska Native practices.

"That's something that I haven't really been able to do yet - weave indigenous knowledge into science," Milligan-Myhre said. "We have this idea that Western science is the only way to do science, and I think that has turned off a lot of indigenous people. But, what I would love to see are two things: One, that indigenous people have been scientists for thousands of years. And two, I would like to see more indigenous scientists."

"A lab of her own" is licensed under a Creative Commons Attribution-NonCommercial 4.0 International License.