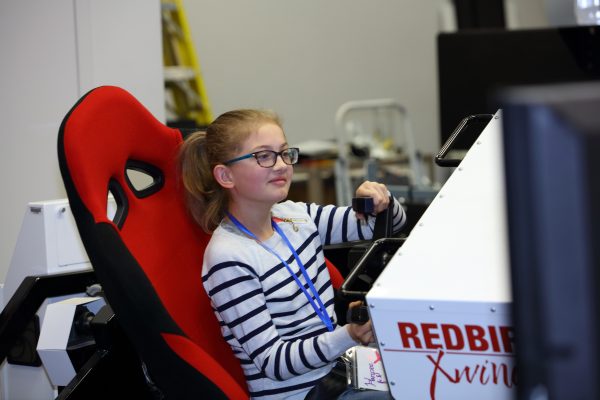 By Dec. 31, 2017, of the 609,306 total piloting jobs available in the U.S, 42,694 of those were held by women, representing seven percent of the total piloting jobs in the country, according to the Federal Aviation Administration's (FAA) Annual U.S. Civil Airmen Statistics report. Additionally, in that report, the FAA totaled women working in aviation in non-piloting jobs - which includes everything from mechanics to dispatchers - to represent only 29.2 percent of the total jobs.

Girls in Aviation Day - an annual worldwide event hosted by Women in Aviation International (WAI) - is hoping to change these statistics and introduce young girls into the world of aviation early on, and help them discover the numerous career opportunities within the industry.

"It's definitely a job that girls and women can look into and get excited about," said Sherri LaRue,  associate professor of aviation technology in UAA's Community and Technical College (CTC). "Aviation is a job a lot of them [girls] don't think about and when they do think of it, they only think of piloting. There's a lot more jobs than that and they tend to be pretty high paying."

About 40 girls from elementary to middle school attended the event and had the opportunity to glimpse what a career in aviation might look like.

The girls were divided into groups and had several sessions throughout the morning, including hands-on activities like testing out their skills in the flight simulator to land a plane in inclement weather, to directing an airplane to land on a runway in the air traffic control radar simulator. In addition to taking their turn in the simulators, LaRue said the girls were also given problem-solving tasks related to airplane maintenance. In the afternoon, the group came together for a panel discussion led by WAI Alaska Frontier Chapter, PWC and UAA ATD staff.

On-hand throughout the day, students from UAA's ATD program volunteered their time to help run the simulators, lead the groups, answer questions and help guide the problem-solving activities. 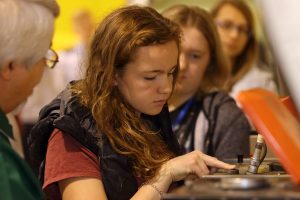 Girls participating in the Girls in Aviation Day had the chance to learn about the maintenance and mechanical side of aviation with a hands-on task. (Photo courtesy of Chris LaRue)

"I love seeing girls in aviation - we like to band together," said Kezia Belisle, while adjusting her Miss Alaska Sweetheart sash. Belisle, a junior in the professional piloting program, decided to wear her crown and sash to the day's event to send a message that girls can participate in what's seen as "traditionally girly" activities, while also pursuing an education or career that's typically male-dominated. "There's a stigma that this is a 'guy's world,' so when you come in and take classes and you're the only girl - it can be a little bit disappointing. But, when you come in at a young age and see other girls doing this, I think that's encouraging and important to see."

Her classmate Tawny Taylor agreed. Taylor's been flying since high school and caught the bug at an early age. She fell in love with flying and said there's nothing else that puts an immediate smile on her face. She thinks it's important for her and Belisle to help introduce girls to the possibility of a career in aviation because it's such a supportive community and not a lot of girls consider aviation as a job path.

"I think it's been fantastic - I mean we're in the simulators and teaching them the basics," said Taylor of helping supervise the flight simulator.  "They're pretty shy, most of them, but once they kind of get into it they have a lot of fun. I had several girls come back over and over again, so they're having fun."

Christina Calvert, a PWC member who was an air traffic controller and is now a quality control manager for the Kansas City District, and Jennifer Lemmon, who was a tower controller in Houston and is now a traffic management specialist at the Air Traffic Control System Command Center in Virginia, flew up to Anchorage for the event. 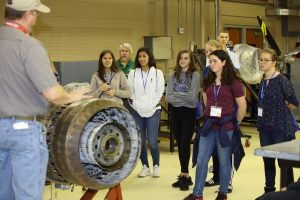 A small group of girls listens to a UAA Aviation and Technology Division instructor during one of the break out sessions at the Girls in Aviation Day event. (Photo courtesy of Chris LaRue)

Calvert said that's why WAI's Girl in Aviation Day events are so important, because women are so underrepresented in the aviation industry. She said what's unique about hosting the event in Alaska and at UAA is that the ATD has an air traffic control simulator.

"This is huge," Lemmon said. "We've got the simulator and not just the tower portion, but the radar side of it as well. The girls have gotten to go into the engine lab and do a borescope on an engine and then we're also getting to do a panel this afternoon with women in different fields of aviation."

Both Calvert and Lemmon echo the same sentiment as Taylor and Belisle, saying that they are constantly amazed by how many girls feel like they can't go into aviation because it's a "boys job." But Calvert and Lemmon are working to change that; they've spent their careers trying to change that mindset through their work with PWC, flying across the country to different events to introduce young girls to the benefits and exciting career opportunities in aviation.

"I love my job," said Lemmon. "I worked in a tower for 11 years and I love that I got to go to work and watch airplanes every single day." She said it's the best office view you'll ever have, and at the end of the day, you get to leave work at work. Additionally, she said retirement comes early - all air traffic controllers and airline pilots have a mandatory retirement age - which leaves room for either a second career or opportunities to explore and travel.

For some of the girls, the day's event may have been the first time they'd ever thought about aviation as a career, or maybe it was just an idea they'd already been dreaming about - but either way, Girls in Aviation Day was a jump start to help young girls feel inspired and think about the possibilities of a career in flight.