Remarkable scientists from faraway lands join forces to confront a global event - that sounds like the synopsis of a major Hollywood blockbuster, but it's actually real life, and it's happening right here.

Don't worry, the adversary isn't aliens, but rather climate change. More specifically, how climate change is affecting two Alaska ecosystems: the boreal forest, which covers roughly 11 percent of the world's land mass and is undergoing changes in wildfire regimes; and the Gulf of Alaska, which spans an area of about 60,000 square miles and is experiencing physical and chemical changes that are impacting nearshore ecosystems and organisms.

Taking on an epic task requires an epic team-up, and this collaboration doesn't disappoint. Working together are researchers from all three main UA campuses - Anchorage, Fairbanks and Southeast - across a variety of disciplines in the physical, biological and social sciences. Once fully staffed, the team will consist of more than 30 faculty members, five new faculty hires, six postdoctoral researchers, and 44 graduate and 45 undergraduate research assistants.

Such an ambitious partnership is made possible by a 5-year, $20 million grant recently provided by the National Science Foundation (NSF) to the Alaska Established Program to Stimulate Competitive Research (EPSCoR) for the "Fire and Ice: Navigating Variability in Boreal Wildfire Regimes and Subarctic Coastal Ecosystems" (F&I) project.

F&I is divided into two research groups: the boreal fires group and the coastal margins group. Boreal fire researchers will focus on identifying climate drivers of fire weather, developing tools to better predict and track active fire behavior, and examining the impact of fire on subsistence communities. Coastal margins researchers will study the impact that varying glacial environments have on nearshore marine ecosystems, organisms and institutions. 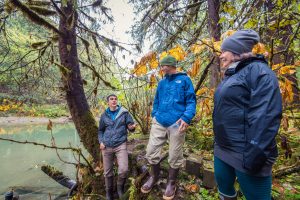 The research project is divided into two teams: the boreal fires group, and the coastal margins group, which include Munk, Klein and Fellman. Their objective is to study how physical and chemical changes to the Gulf of Alaska are impacting nearshore ecosystems and organisms. (Photo by Molly Tankersley / University of Alaska Southeast)

Representing UAA as co-principal investigator for F&I and researcher on the coastal margins group - or the stream team, as she jokingly calls it - is LeeAnn Munk, Ph.D., watershed hydrogeochemistry expert and professor of geological sciences. She is joined by Eric Klein, Ph.D., researcher and hydrology expert on the coastal margins group and assistant professor of geological sciences.

Munk, Klein and company will be examining and mapping the increasing levels of fresh water fluxing into the estuary environments in the Gulf of Alaska. They will also observe a gradient of glacier-fed to precipitation-fed watersheds and the shift of those watershed regimes due to changing climate. To do that, the team will install monitoring devices throughout various watersheds in Kachemak Bay in Southcentral Alaska, and Lynn Canal in Southeast Alaska.

While "pouring ice water into the ocean" sounds like an idiom describing not having a discernible impact, Munk is quick to point out many overlooked and poorly understood variables. For instance, added glacial meltwater can create temperature fluctuations and alter nutrient sources that affect marine life in the exit watershed. Furthermore, higher meltwater flow has the potential to transport higher volumes of fine rock powder, increasing the turbidity of the exit watershed meaning a decrease in the amount of light that can penetrate the water, which can alter the area's food chain.

"Glaciers are undergoing changes and with that there's an increase in meltwater. That's likely to increase with time," echoes Klein. "We're trying to understand the various impacts of that increase. Thinking about Kachemak Bay, how far into the bay does the meltwater go? How does the fresh glacier water going out mix with the saline ocean water coming in? What are the impacts to the fish populations?" 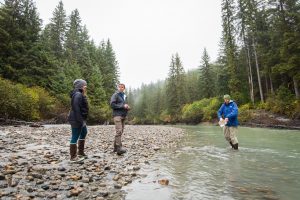 Munk, Klein and company will examine how the increasing levels of water melting off of glaciers due to climate change will affect the surrounding environment by installing monitoring devices throughout various watersheds in Kachemak Bay and Lynn Canal. (Photo by Molly Tankersley / University of Alaska Southeast)

To observe glaciers at different stages in climate variability, the coastal margins group will employ a technique called space-for-time substitution. The practice involves predicting how a site will behave under certain conditions by examining a stand-in location that is already representative of said conditions.

In the case of F&I, the coastal margins team plans to substitute watersheds in Kachemak Bay and Lynn Canal that vary in the amount of ice coverage from 0 percent to more than 50 percent ice coverage as indicative of various times in the future when the ice has melted due to changes in climate.

Once enough data has been collected, the ideal result is for the information to be used toward predictive modeling. The resulting insight can go a long way to help communities and industries that rely on marine ecosystems affected by the fresh water discharge.

"It's a little bit like a time machine. The people who do the modeling and forecast based on data we provide, they can say here's what we might expect in 10, 15, 20 years if we continue on this trajectory," Munk explains. "The importance is that for the people who manage the estuaries and the fisheries, maybe they're not going to have the same kinds of fish or the same numbers, so that can have big implications for how they need to plan."

Fieldwork in Kachemak Bay is slated to begin in May 2019 after filling the remaining vacancies on the research team and waiting for the weather to become more agreeable. In the meantime, Munk and Klein are wasting no time by consulting with their fellow scientists in Juneau. 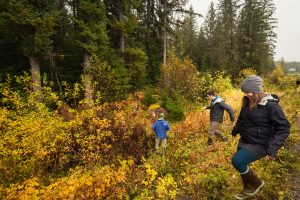 Munk and Klein recently traveled to Juneau to see how a similar study already conducted by UAS researchers can be adapted for use on the current project. (Photo by Molly Tankersley / University of Alaska Southeast)

The group discussed ways to adapt equipment and techniques employed by Fellman and Hood during a previous EPSCoR project that similarly monitored water in Cowee Creek for use at the Kachemak Bay site. While Munk and Klein's camp is no stranger to the challenges inherent in any Alaska field research location - namely unpredictable weather and bears tampering with equipment - those obstacles are exacerbated given the relative inaccessibility of the Kachemak Bay sites which will limit how often the team can visit to make adjustments or take repeat measurements.

"A lot of science is determining what's already been done and what we can build on," Munk says. "We're working with our colleagues checking out how they do their measurements and what kind of equipment they use. We have to see if we can take what's working in Juneau and make it measure what we need to measure. They'll also go with us to the Kachemak Bay site and we're all going to make these decisions together and come up with a plan that works."

Klein adds, "That's one of the really neat things about this is that it's involving people from all campuses. It's really great to have the opportunity to collaborate with them on a project that has multiple years so we have the time to really establish some of these ideas and get a really good idea of what's going on. I'm also excited to learn new things, that's why we scientists do this." 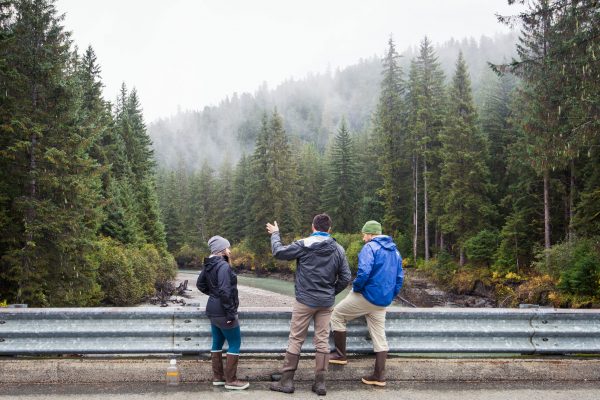