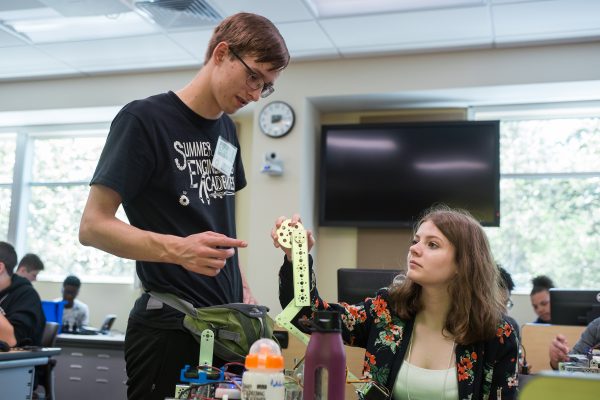 For as long as Birch Boyer can remember, he's loved to build. Specifically robots. Now, the incoming freshman will put his lifelong passion, that started as Lego constructions on the bedroom floor, to the test in the classroom this fall when he enters UAA's College of Engineering (CoEng) mechanical engineering program.

"I've been doing robotics for a long time - since kindergarten," said Boyer, who spent his days in elementary school tinkering with robotics before getting more serious about them in middle and high school. Boyer participated in high school robotics programs and clubs at Dimond and East High School. This spring he graduated from Polaris K-12 School with a slew of awards and accolades for his academic achievements, most notably being named one of two Alaskans for the U.S. Presidential Scholar award and the CoEng Dean's Excellence Award, a four-year scholarship handed out to only a handful of top incoming students each year.

"Birch is exactly the kind of student we had in mind when we created our prestigious Engineering Dean's Excellence Award," said Fred Barlow, dean of UAA's College of Engineering. "While our students receive about $1.6 million in scholarships annually, this four-year scholarship is awarded to only a very few students each year based on the strength of their academic achievements in high school."

In addition to his background in robotics and his drive for academic success, Boyer enjoys giving back to the community and sharing his wealth of knowledge. When his high school robotics coach, Dimond High's Wade Roach, connected him with Scott Hamel, associate professor of civil engineering and director of UAA's Summer Engineering Academies, he jumped at the opportunity to help inspire the next generation of potential engineers as a camp instructor. 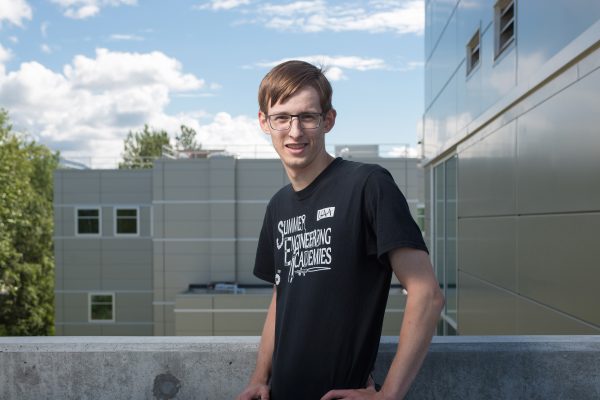 Birch Boyer always knew he wanted to study engineering and is excited about the opportunities a career in engineering will bring. (Photo by James Evans/ University of Alaska Anchorage)

"I talked to a lot of people who wanted to move away, but I love Alaska," said Boyer. He's a regular Alaska kid who spends his summers hiking, fishing and playing Ultimate Frisbee, while heading out with his brothers and dad for fall caribou hunts. He likes the Alaska life and is worried that if he strays too far from home, he'll get stuck somewhere else and miss the familiar people, places and mountains he's grown up loving. "If I stay here, I can get an internship here, but if I'm attending Stanford, my internship will be in California - which will lead to a job in California. I want to be here."

Additionally, he's confident in the strength of the education that UAA's engineering program will provide. He's also excited about the variety of extracurricular opportunities available at UAA, from Model UN and robotics club to student government and internship opportunities.

"As far as engineering programs go, this is a good program," he said. "It's got some good options and is close to everything I know. It means I can stay connected with all the different things that I've been working on."

UAA's Summer Engineering Academies are loud, entertaining and educate students from elementary school to high school on topics ranging from alternative energy and water to structure destruction and Lego robotics - one of the camp's most popular programs. The camps run from the beginning of June through the end of July, and this year about 620 campers have participated. Each year the program hires about 10 students, usually UAA engineering students, to help run the academies.

"It's not too often that we get somebody right out of high school - usually we're looking for folks who are heavily involved in robotics - we tend to mostly hire UAA students," said Joe Selmont, who was recently hired as the assistant director of UAA's Summer Engineering Academies. Selmont explained that although UAA's engineering students are extremely talented, not all of those who apply for a summer academy position are familiar with the niche topic of robotics, which is why Boyer's extensive background as a high school student is so unique.

"Birch is great," said Selmont. "He's a person that loves knowledge and I think he's one of those people who really likes to impart what he's learned over the years." 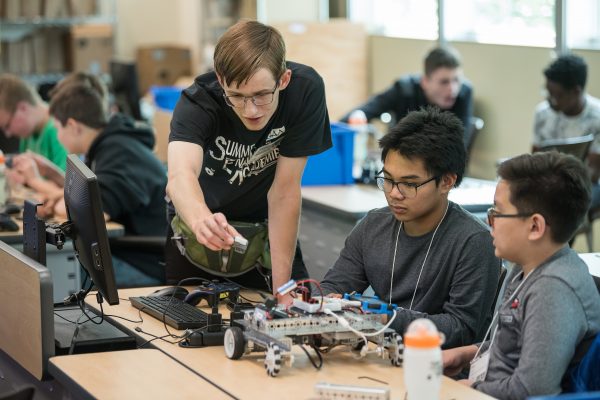 Birch Boyer has always enjoyed teaching and mentoring younger students, which is why he jumped at the chance to be a Summer Engineering Academies instructor. (Photo by James Evans/ University of Alaska Anchorage)

Selmont said a big part of the CoEng offering the summer camps is exposing youth in the community to engineering and all the different topics that fall underneath its broad umbrella. Introducing kids early on, especially in a state that relies heavily on engineering from industries like oil, to building structures that can withstand harsh Arctic environments, is imperative in creating the state's next generation of engineers.

Boyer felt that call early in life and says he's always wanted to be an engineer and work in a field that was creative, yet useful, and to build objects and structures that ultimately make people's lives easier. For him, that was big motivation in coming to UAA to pursue a degree in mechanical engineering, although engineering school won't be his first experience on campus. Boyer himself participated in the summer engineering camps when they first launched.

"I really enjoy teaching and have done a variety of different camps," said Boyer. "I've run Lego and Tetrix robotics camps - both of which I've done and know really well - and then there's alternative energy, which is electrical engineering and so that was really interesting and I learned a lot in that camp."

In addition to teaching, Boyer and the rest of the staff were given the opportunity to create a staff robot themselves, which they then challenged the campers to destroy. It was a big task, but the campers finally succeeded in destroying the staff's bot.

"One of the students destroyed it in the Sumo ring," said Boyer. "I thought, 'yes, someone finally beat it.'"

A peek into the future

Boyer has a lot of experience in robotics and mentorship, but working with the Summer Engineering Academies has given him a glimpse of what an engineer career could be. Besides having fun and working with kids, he learned valuable real-world skills like working with a team and project leadership - skills that will not only aide him in engineering school, but beyond the classroom.

"I've spent a lot of time as a participant, not as much time running the games and activities and I like that," Boyer said. "I like reading people and organizing things. It was fun to build staff robots and using the years of experience to see how far we could outscore the students."

Boyer is excited to head into fall semester this August to start his engineering classes and get involved in student activities, and is looking forward to attending Campus Kick-Off in a couple weeks.

"UAA is very lucky to have him - I think he's going to make a big impact here on campus," Selmont said. "Just yesterday I saw him chatting up one of our student government representatives, so I think Birch is planning to dive right in and get involved on campus. I'm really looking forward to seeing what he can do."

The UAA Summer Engineering Academies, sponsored by BP, is a series of week-long, hands-on instructional sessions for students entering grades 5 through 12 in Anchorage and Mat-Su. Each academy is designed to encourage interest and provide exposure to science, technology, engineering, and mathematics (STEM). The academies also seek to support historically underserved and underrepresented students who have limited opportunities for these experiences.

The academies are divided into 1-week sessions for middle school (grades 5-8) and high school (grades 9-12). Each week explores a different topic. Topics include robotics, computer programming, structures, and other engineering fundamentals.

"Dreaming of engineering" is licensed under a Creative Commons Attribution-NonCommercial 4.0 International License.