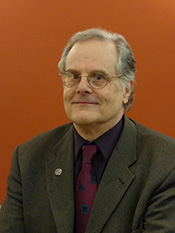 Ronald Spatz specializes in the study of narrative and the short story, cross-genre literature, film, creative writing, and literary editing. A former National Endowment for the Arts Fellow in fiction, he is co-founder and editor-in-chief of the nationally celebrated literary journal Alaska Quarterly Review and founder and project director of LitSite Alaska. His fiction and nonfiction have appeared in a range of national literary journals and anthologies. He has also produced and directed short subject and expressionist documentary films for children and adults that were broadcast on commercial and public television and selected for film festivals, conferences, and used in schools and colleges.

In addition to his role as a professor, Spatz initiated -- at the direction of the Chancellor -- UAA’s honors and undergraduate research programs. He served as founding dean of the Honors College from 2001 to 2014.

Spatz’s work has received recognition from the White House, the U.S. Congress, the Alaska State Legislature, and the University of Alaska Board of Regents. He is the recipient of two Alaska Governor’s Awards (Arts and Humanities), a
Contribution to Literacy Award from the Alaska Center for the Book, four UAA Chancellor’s Awards, a UAA Alumni Association Distinguished Teaching Award, and the University of Alaska Foundation's Edith R. Bullock Prize for Excellence.