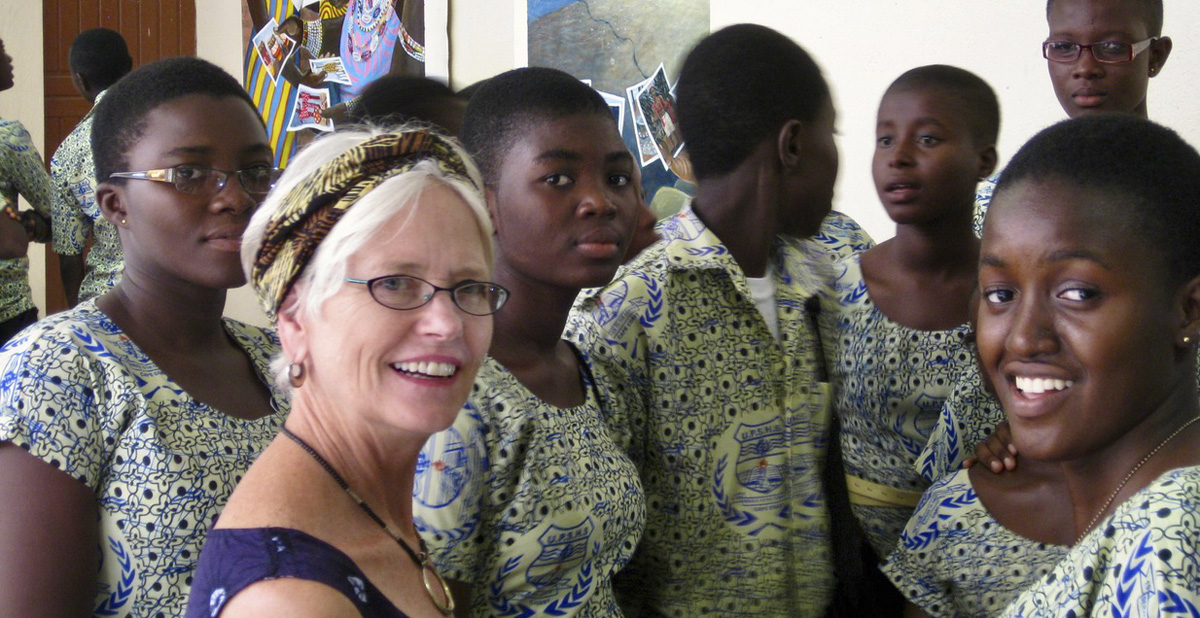 In Cape Coast – removed a distance from the immediacy of the field site of Dzodze and the home base of Accra for the research team, the installation at the University of Ghana Cape Coast, while not in an official "gallery space," none-the less was as moving as Accra. Enveloped by an audience of high school students, local attendees, the brigade of Cuban doctors stationed in Cape Coast, and the traditional chiefs of the Cape Coast area, the project reached out in a manner that surprised us. The educative aspect of this installation was more prevalent than previous presentations as students from the local schools pried us with thoughtful questions and embraced every aspect of the project. The traditional chiefs of the area were no less curious and thoughtful. 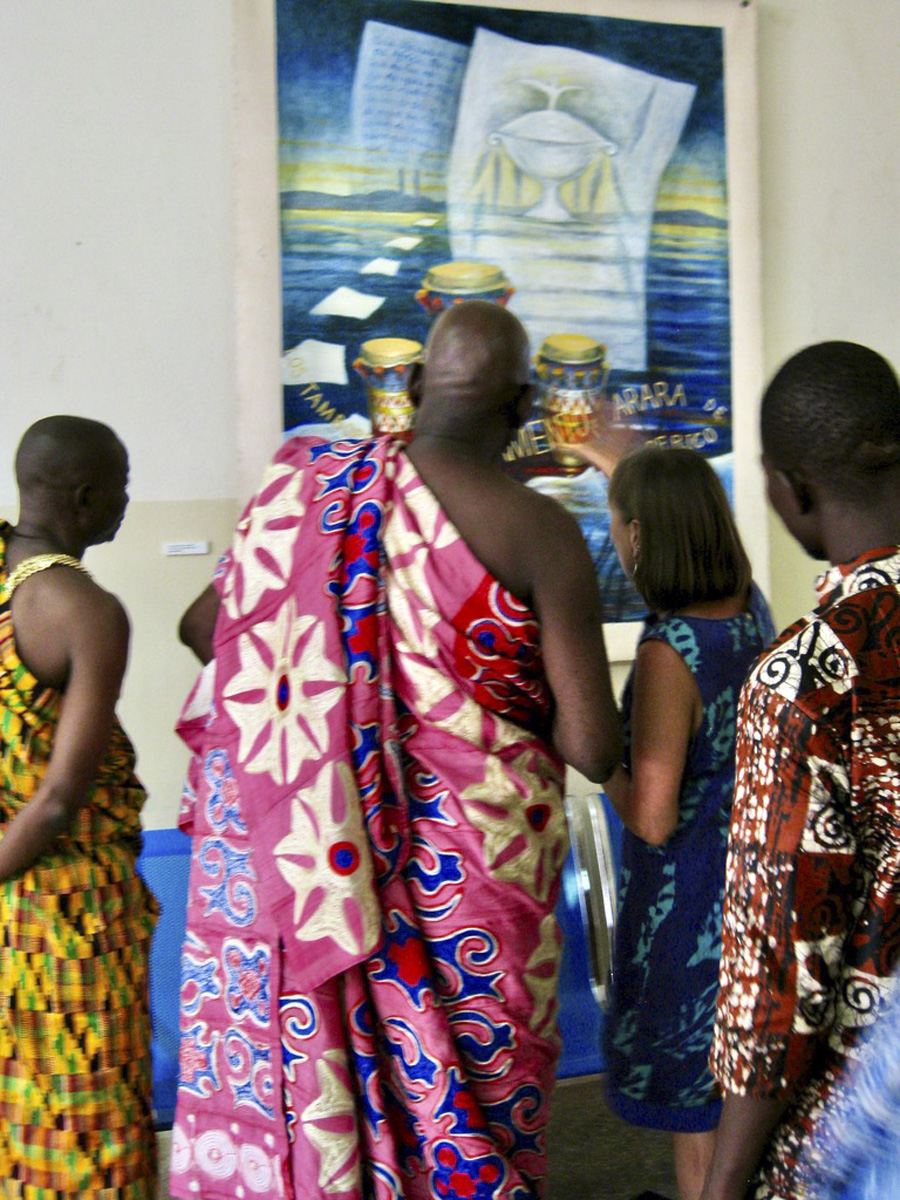 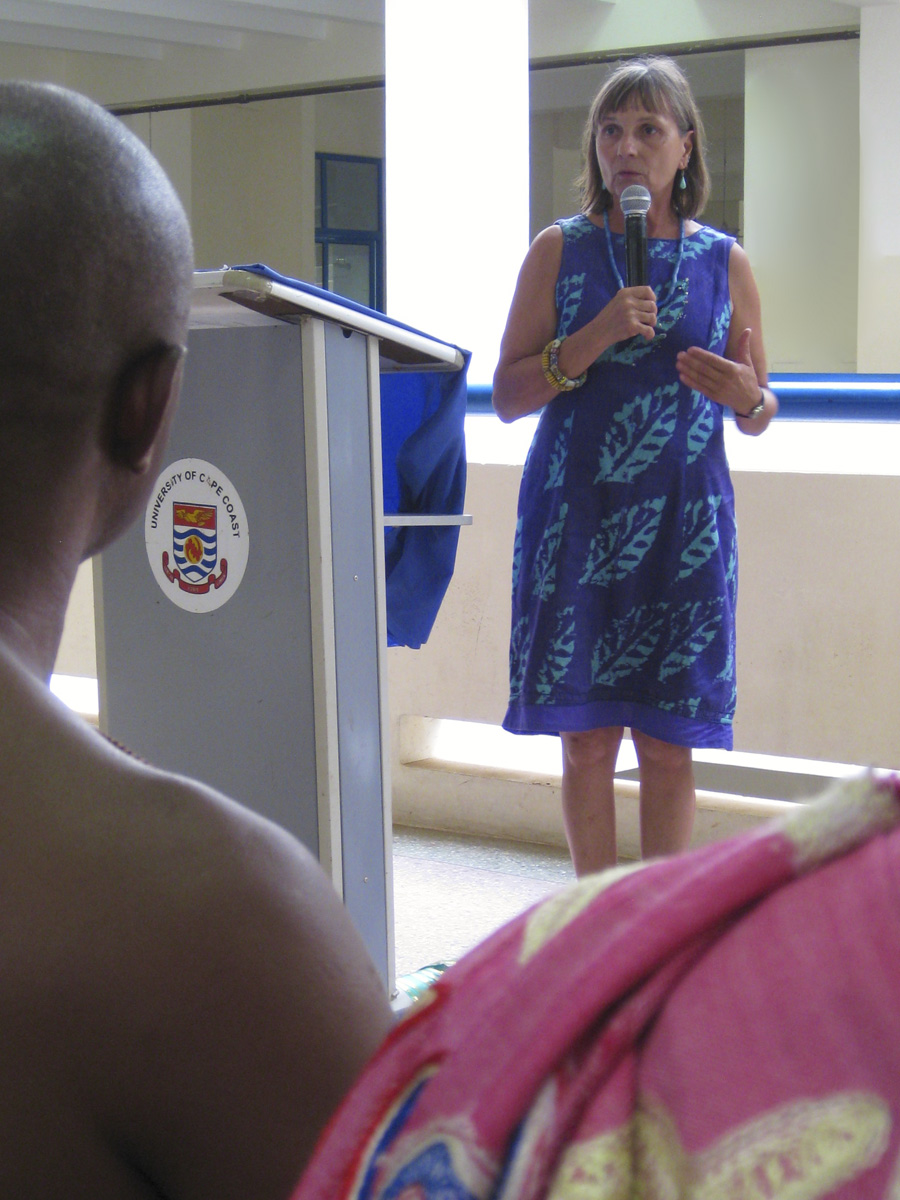 Cape Coast, three hours west of Accra, is a provincial town despite the fact that it is home to one of Ghana's three major public universities. This meant the audience was, by necessity, very different from the audience in Accra, the capital city. On top of that, the university was closed for the summer and most of the students had gone home. So the Ghanaian host reached out to professors and university administrators, invited traditional chiefs from the area, and arranged to bus in dozens of high school kids. Even though the venue was difficult - open-air with little wall space, awkward and disjointed, and even rather noisy - the artists made it work, the invitees came in droves, and it seemed that everyone got something out of the exhibit. The "formalities" were the typical thing in that part of the world: the VIPs gave a few speeches and then the honored chiefs were given a guided tour of the exhibit. For me, the best part was all the students, who were full of questions and not shy about asking: who are those people, what is this about, what does that mean, why did she do it this way. It was wonderful to see these kids exposed to this great art. The second-best part was seeing the crowd gathered around the performance artist. She was definitely of interest in Accra, but in Cape Coast she was a main attraction. I have no idea why the difference… But like I said, it worked!

U.S. Department of State Foreign Service Officer who served at the U.S. Embassy in Ghana 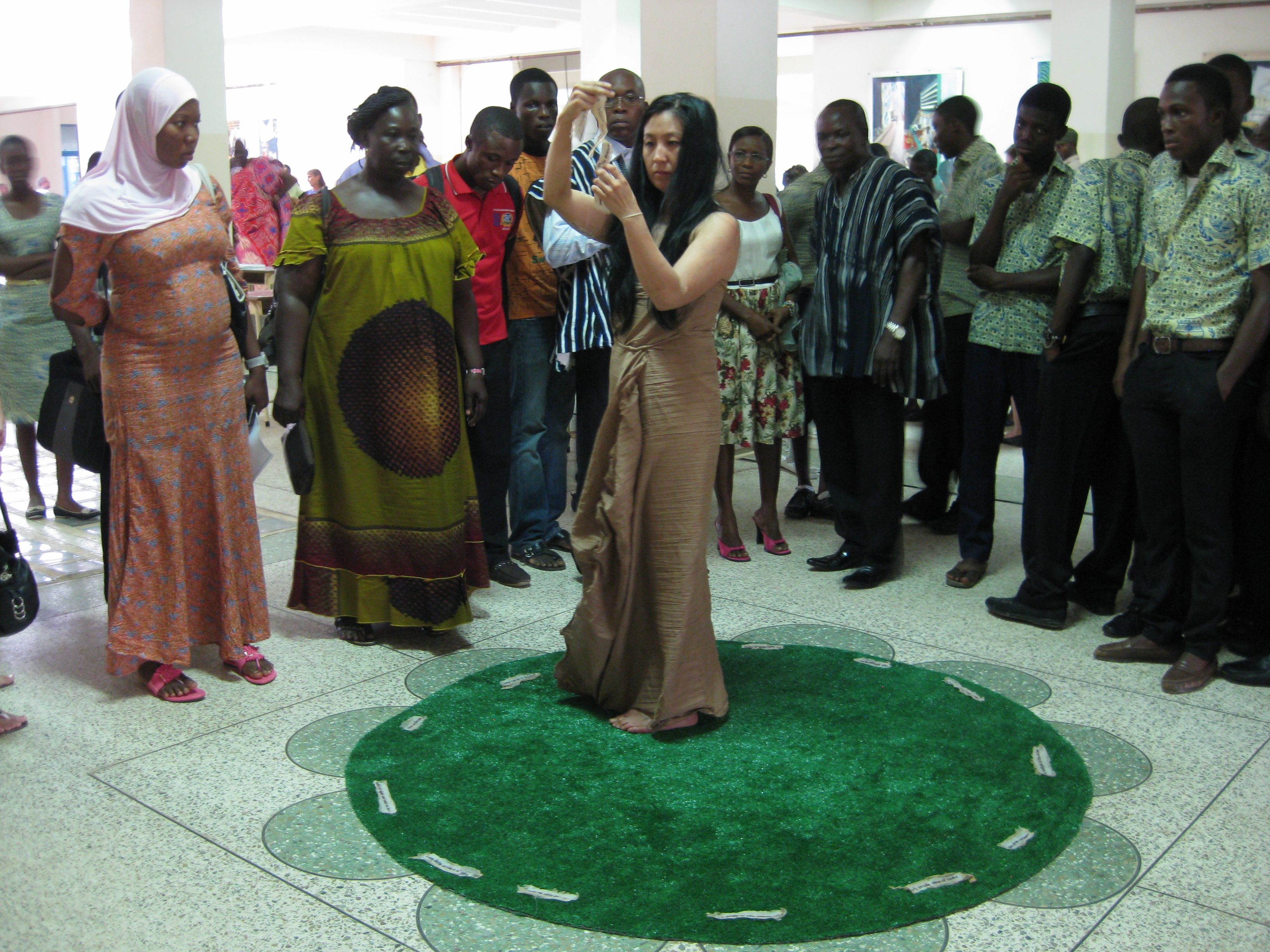 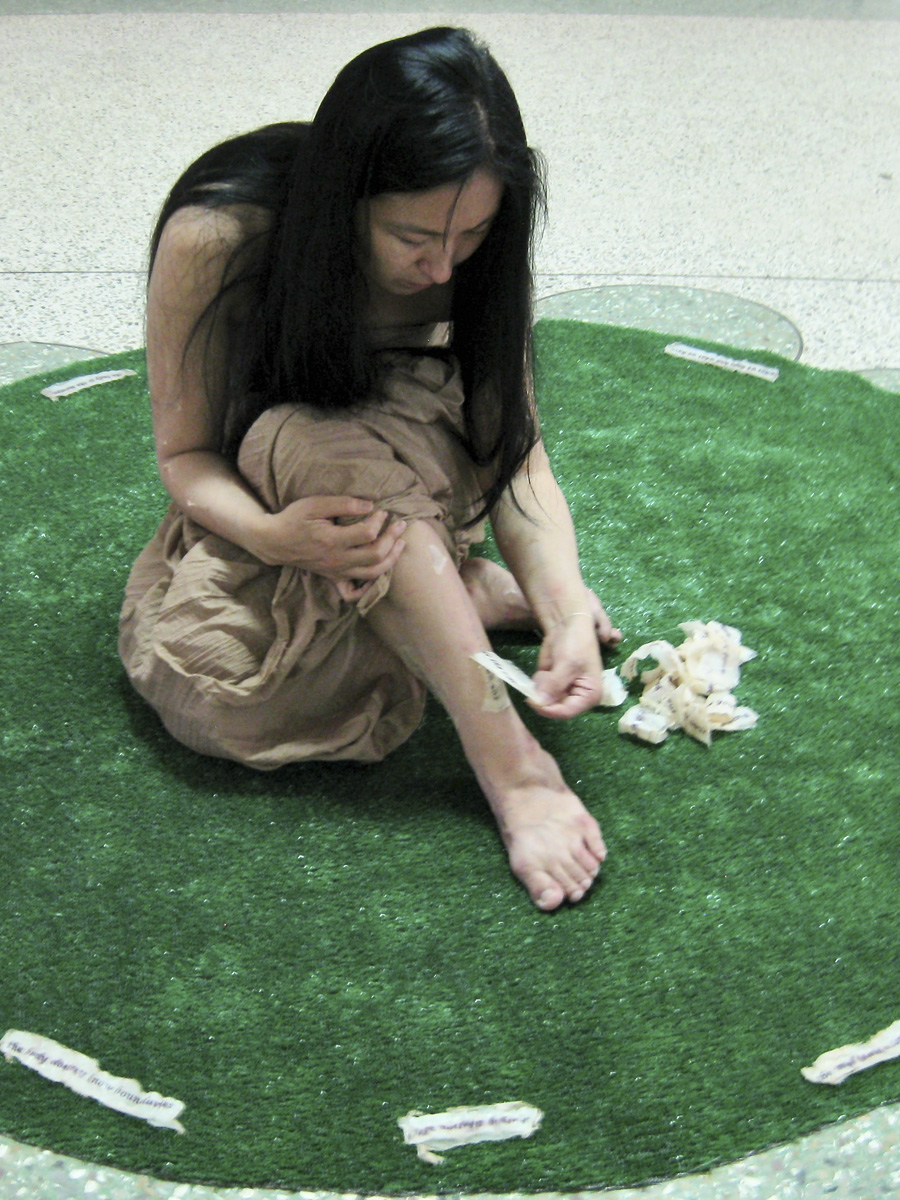 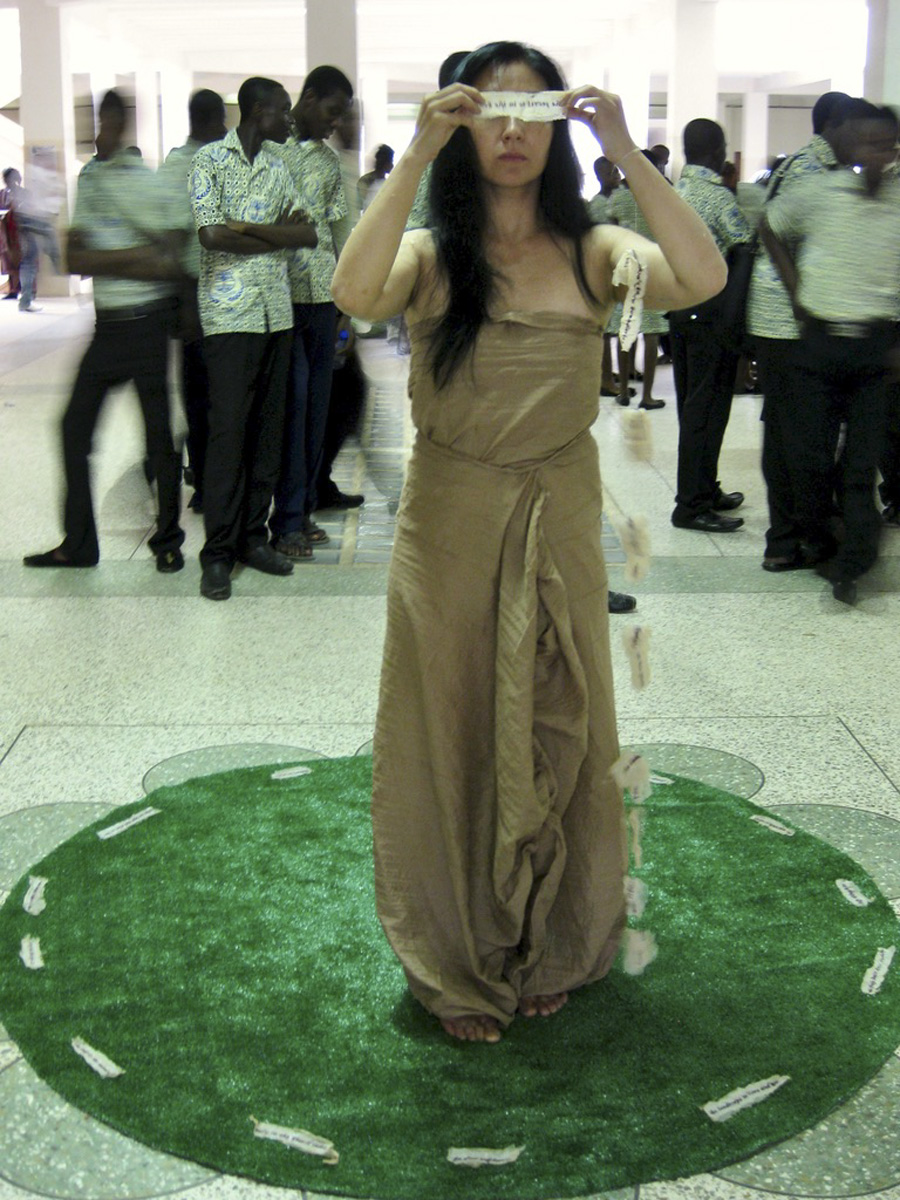 Professor Kwadwo Opoku Agyemang hosted us at the University of Cape Coast. The venue was huge and airy and difficult to install, but we managed. People trickled in slowly at first, until five traditional area chiefs entered in full traditional dress, a group from a near-by high school filed in in uniform along with 13 Cuban doctors and numerous dignitaries and professors. There was a long, formal introduction with speeches. One of the chiefs sternly warned people not to let go of their culture, not to let go of their dance. I asked how people felt about foreigners coming in and creating a show of this kind, but it was a non-issue. The work brought up other concerns. People from the city were worried about losing their rural traditions. The Cubans were calling home to tell their families about seeing images from Cuba. Professor Agyemang had procured a huge spread of food and drink and it turned into a joyful party. Of the project Professor Agyemang said, "You privilege people who are not normally privileged." I came away with the sense that art had gone on creating in its own language.

All images by Brian Jeffery