Secrets Under the Skin premiered at Fundación Ludwig in Havana, Cuba, December 22, 2010. 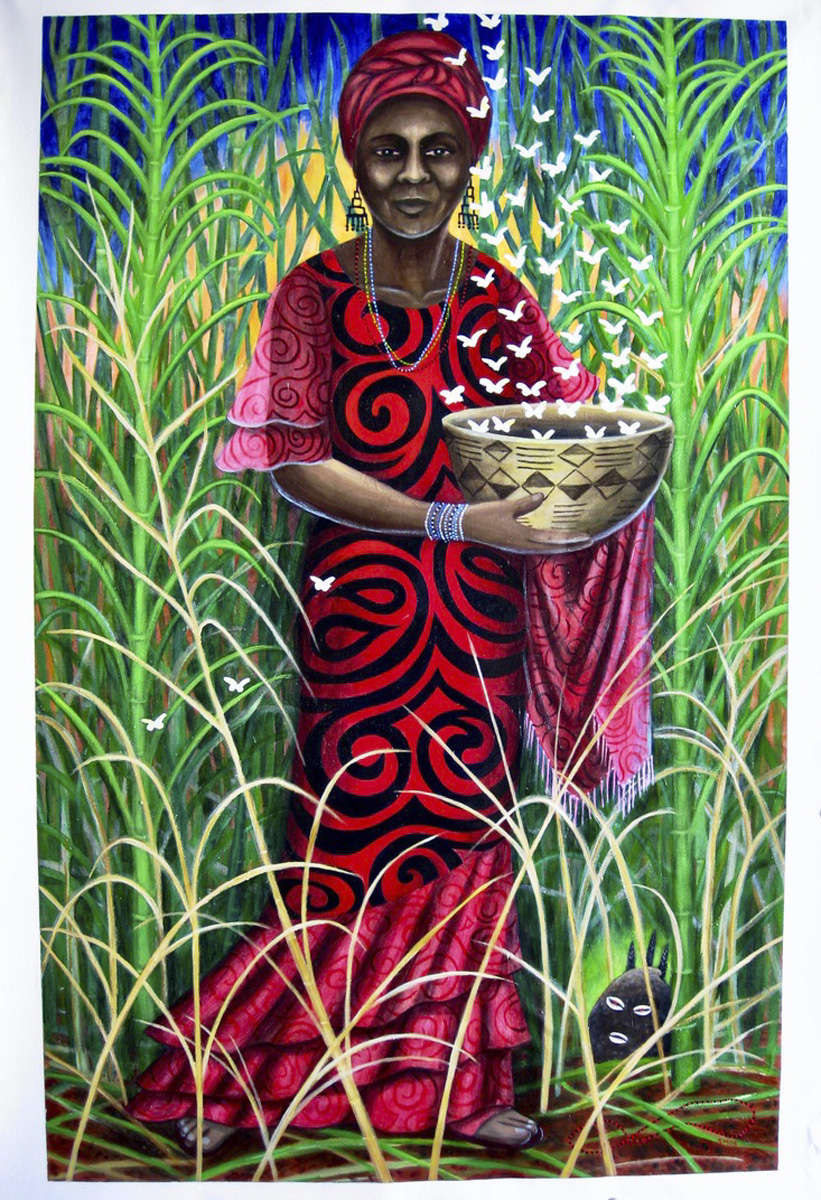 Hilda Victoria Zulueta, one of the most revered elders in Perico, was determined that our research team should learn as much as possible about the history of Perico and its Arará religious roots. She guided us to other key elders, and to locations in and around Perico that remain deeply embedded in the social and collective memory of Perico; sites that connect contemporary Perico to ancestors that "arrived directly here from Africa." "Don't be like those who have been here, gathered much information, and didn't do anything with it," she urged.

Other elders and important religious leaders in Perico and Agramonte trusted our research team with additional stories and they trusted that we would tell their stories to those outside of their communities. This became a responsibility that I personally felt as project director and lead investigator. How could I tell their stories in a way that evoked the depth and complexity of both Perico and Agramonte in a way that was respectful, but that was different than the standard written ethnographic text? Written words alone seemed inadequate to capture the depth of the stories and religious ritual in the way that art could. Arts-based works allowed for a rich, evocative and simultaneous layering of information while offering space for our own responses to this complex and deeply moving material.

The opening at Fundación Ludwig was a day none of us will forget. It was humbling for all of us when elders and community members from Perico and Agramonte came into the gallery to see that, indeed, we had done something with the material they gave us. They carefully read all of Susan Matthews' manuscripts, pondered Brian Jeffery's photographic assemblages from Ghana, and viewed my own DVD presentations. They watched Marianne Kim with respect and stood in front of the DVD that featured interviews from elders in Ghana and Togo who spoke back in response to questions from those in Perico to those in Africa. They wanted to listen again and again to the sound of the African language. 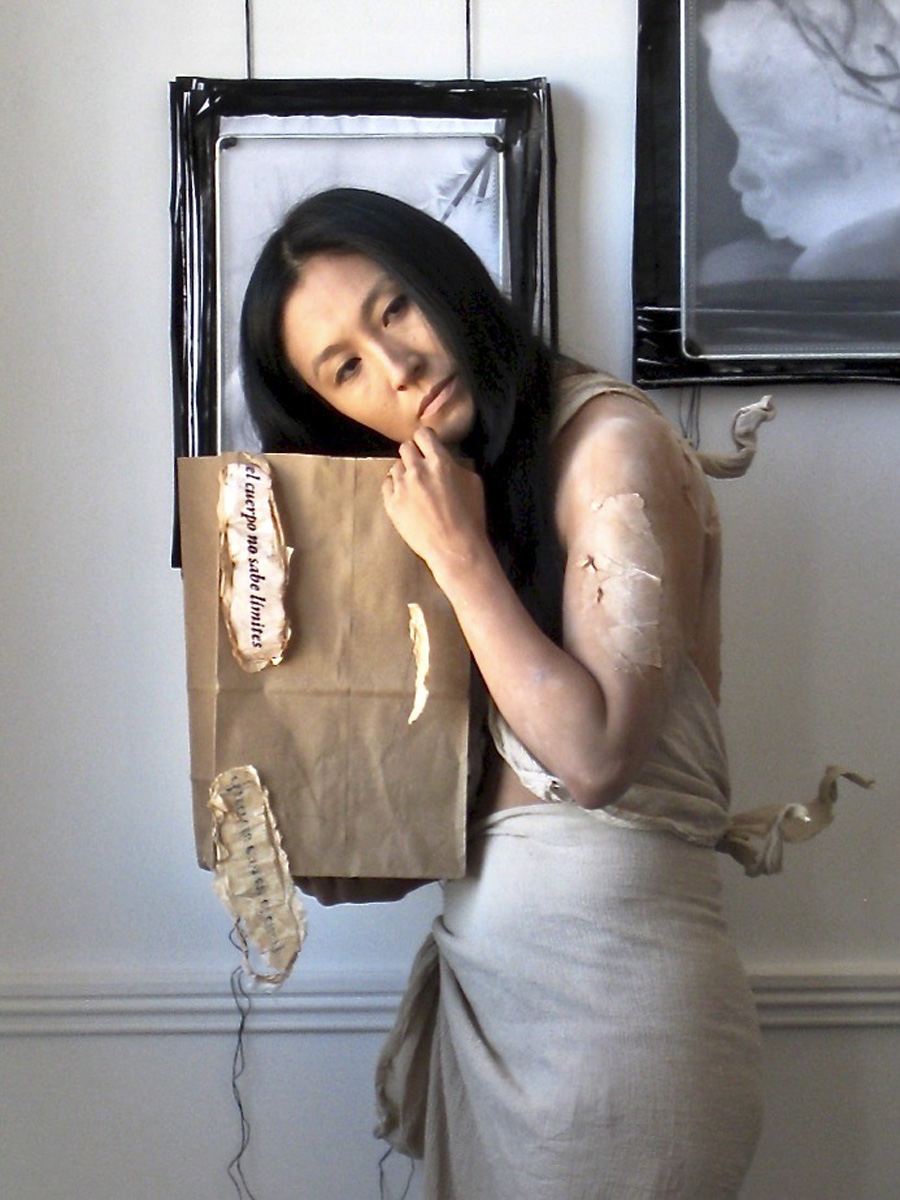 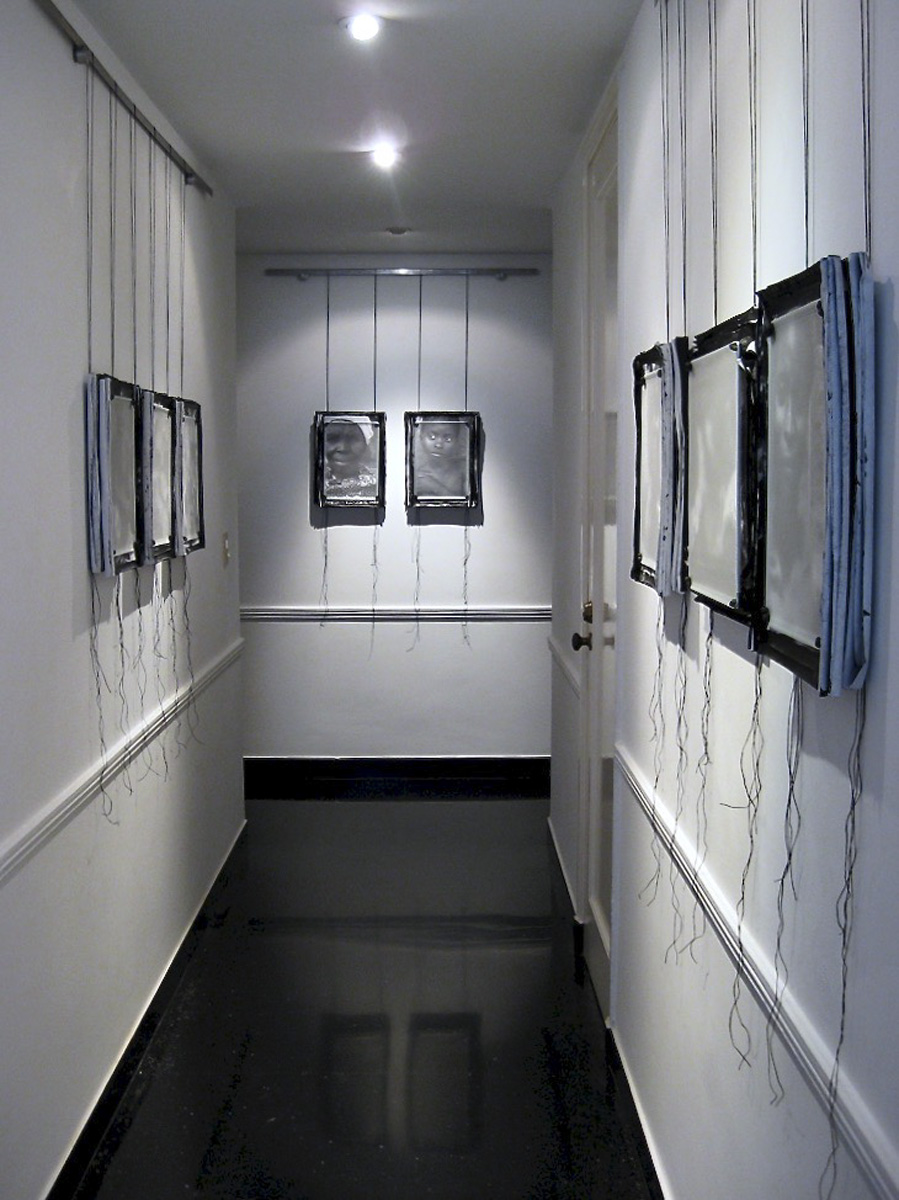 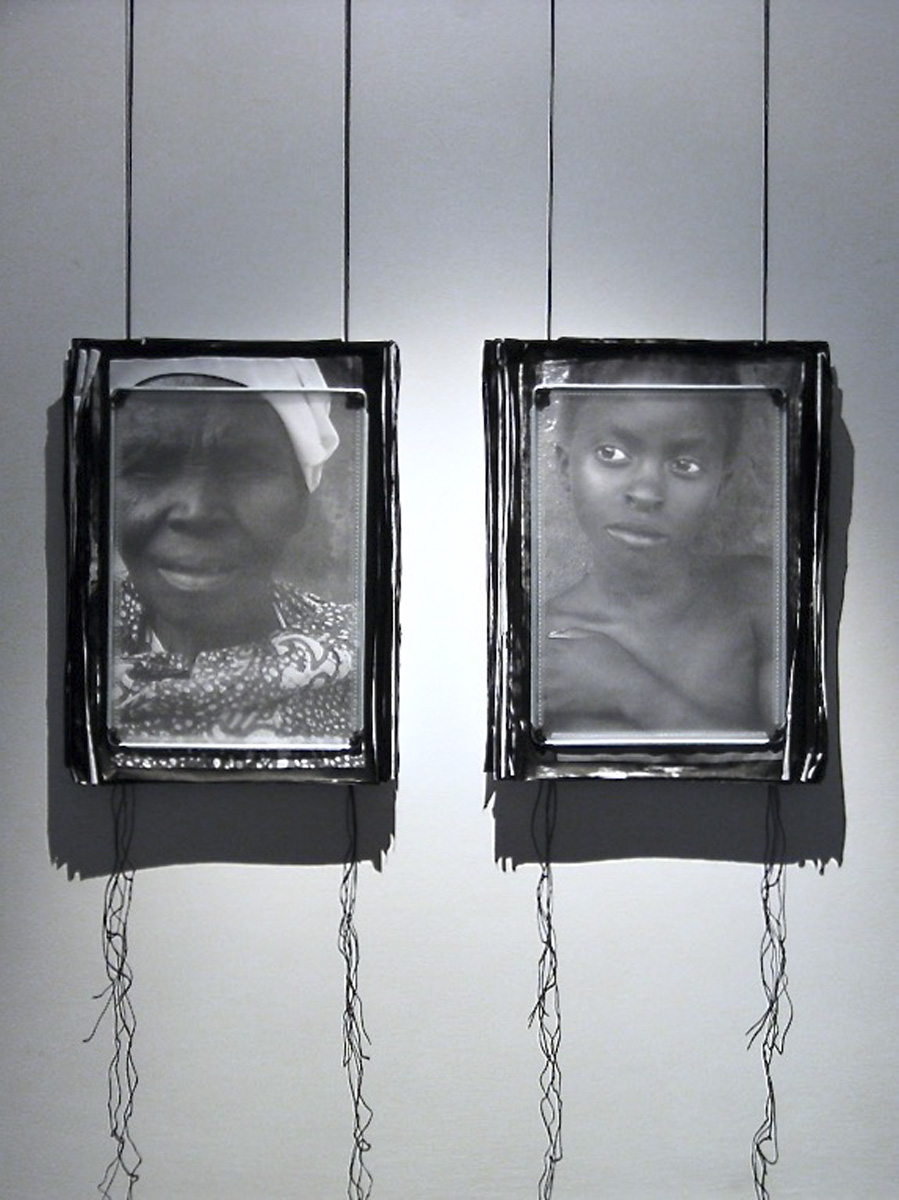 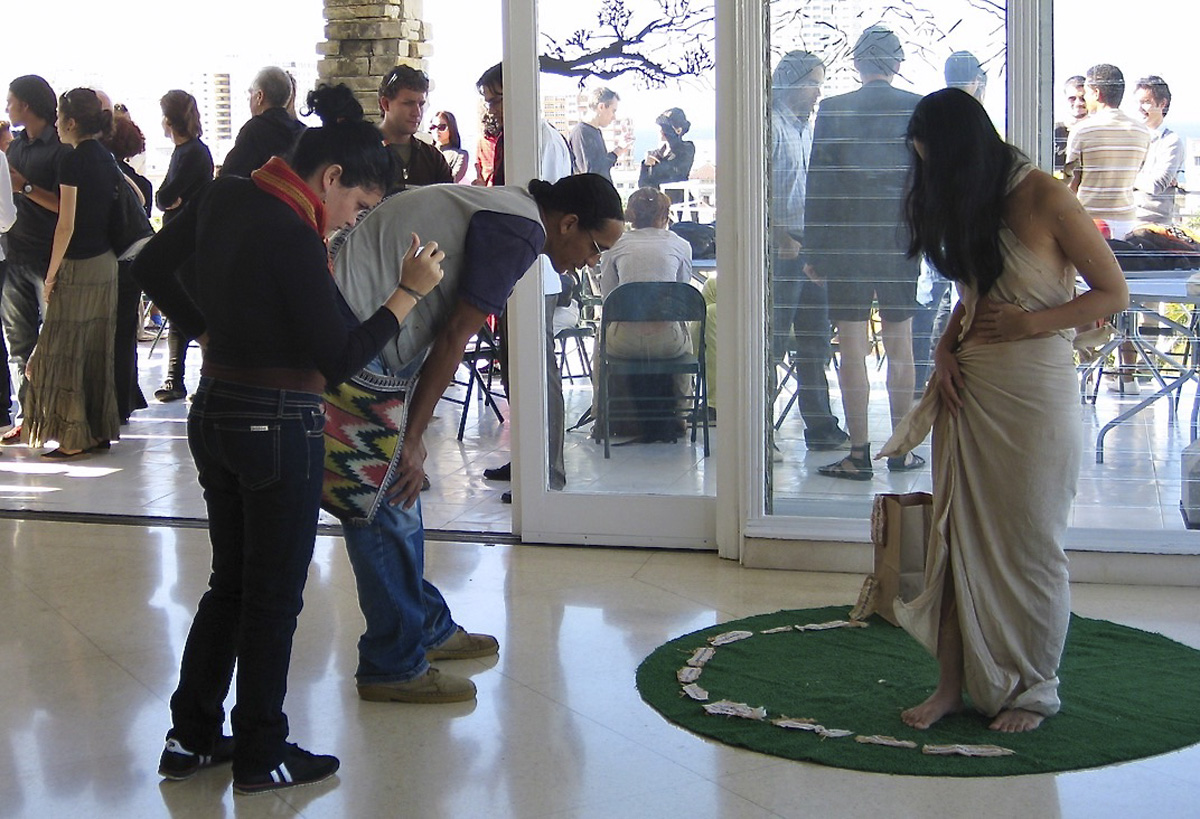 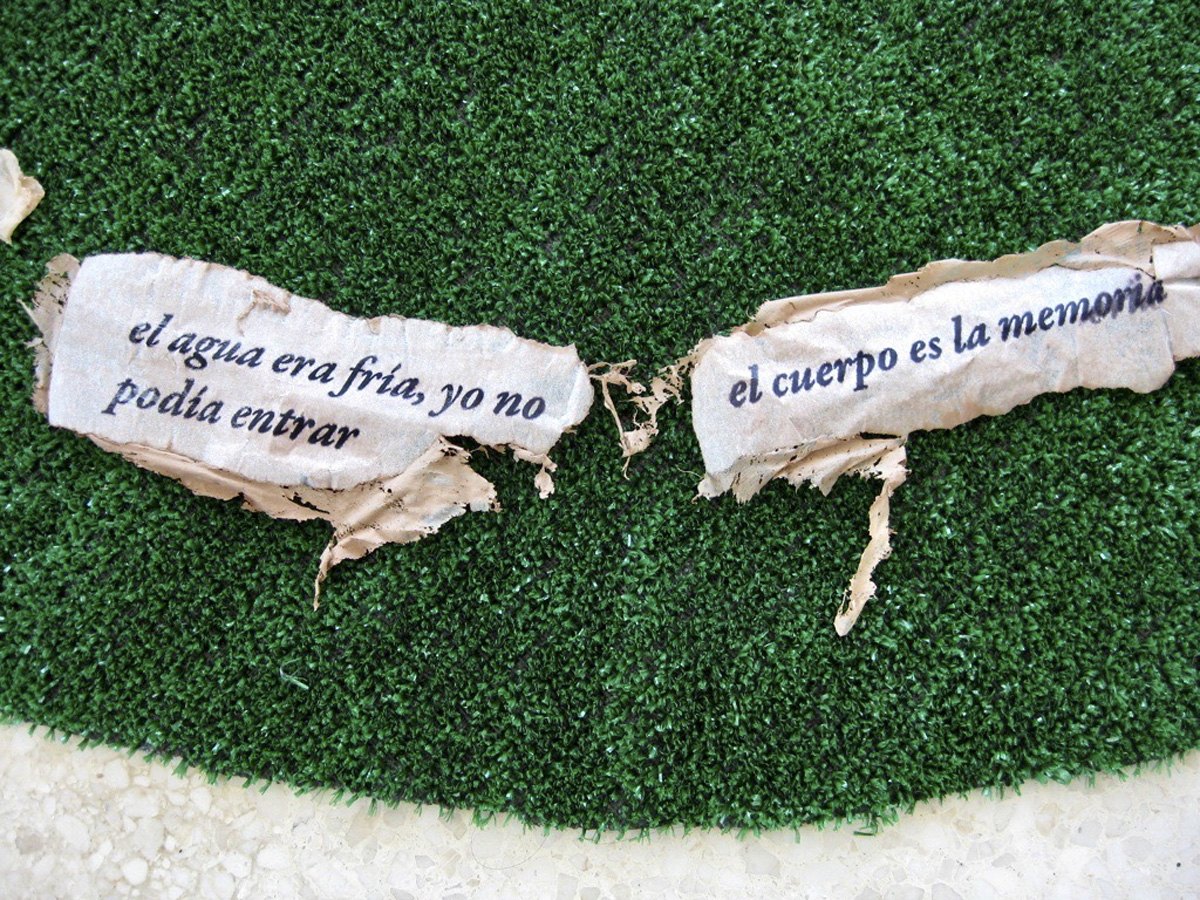 Additionally, the key Arará musicians came to Fundación Ludwig in Havana to play their sacred music for the opening. This was an honor for them since they seldom play outside Perico.

Thank you in particular to Helmo Hernández, President, and to Wilfredo Benítez, Deputy Director of Fundación Ludwig for trusting in and presenting this project as a premiere in Cuba. It was critical to this research team that this material was presented first in Cuba. 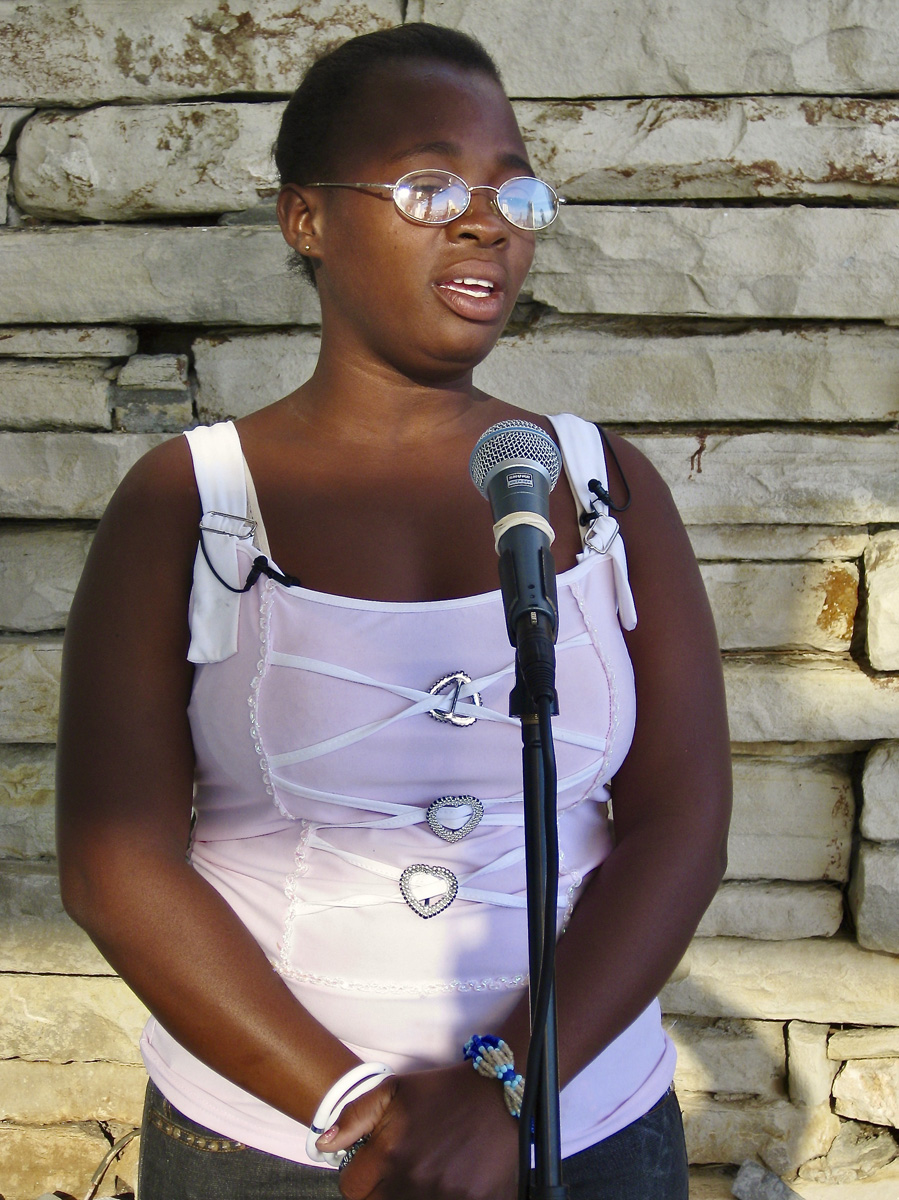 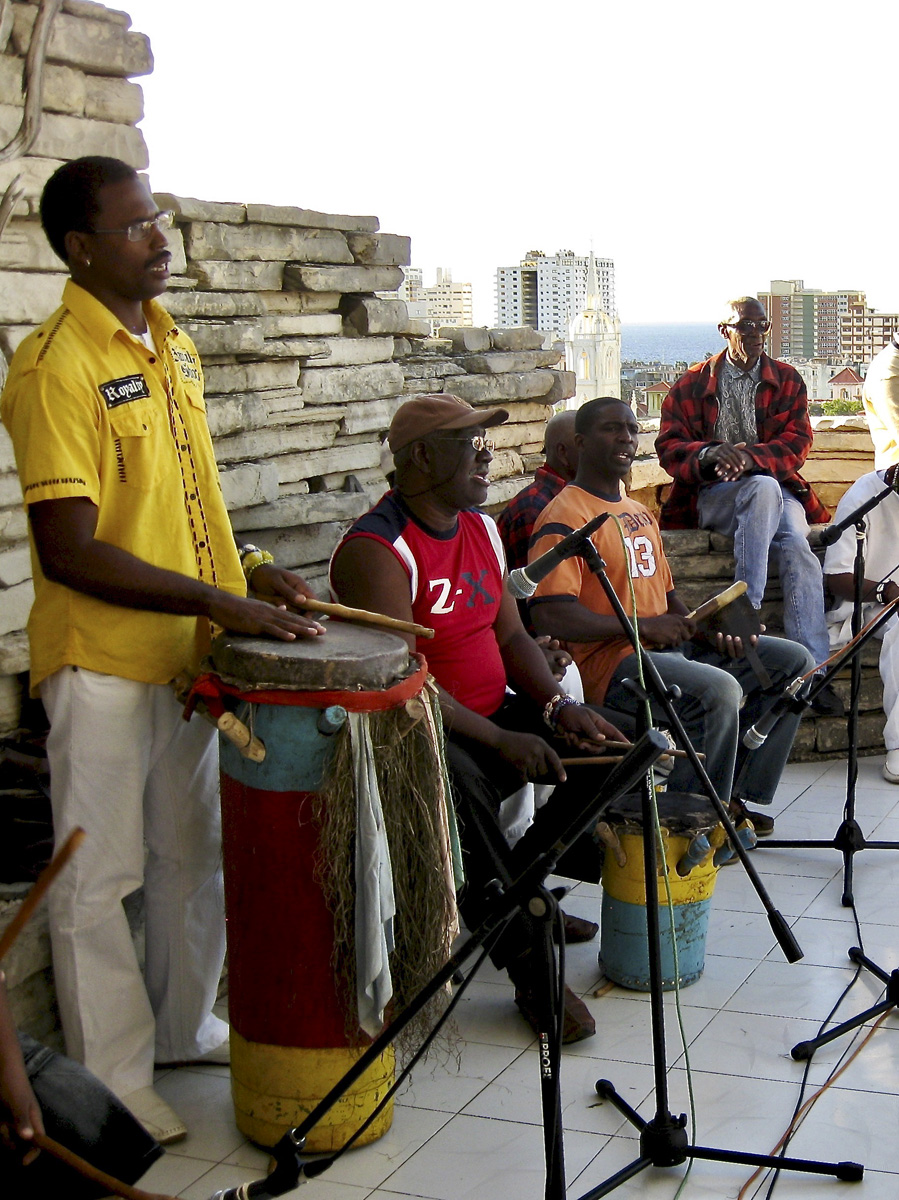 One of the great experiences with the project was the moment the musicians entered the Fundación Ludwig for the opening reception. Lazarita, the lead singer, exclaimed, "Look what they did with us!" Then they proceeded to study each image and video carefully. Prieto, who is the keeper of Sociedad Africana, took me over to a manuscript with his portrait painted on it.  He kept asking, "That's me, isn't it?  You made me look younger!  Read it to me!" And I had to read every word to him as he nodded affirmatively. Lazarita, who is fun loving and outspoken, saw her portrait and burst out laughing. "Look!  She put a biscuit on my head!" I thought I had painted a bun, but to her it looked like a biscuit. I had been holding my breath for months, not knowing for sure how they would receive our interpretation of them, but it turned out to be a fabulous celebration. 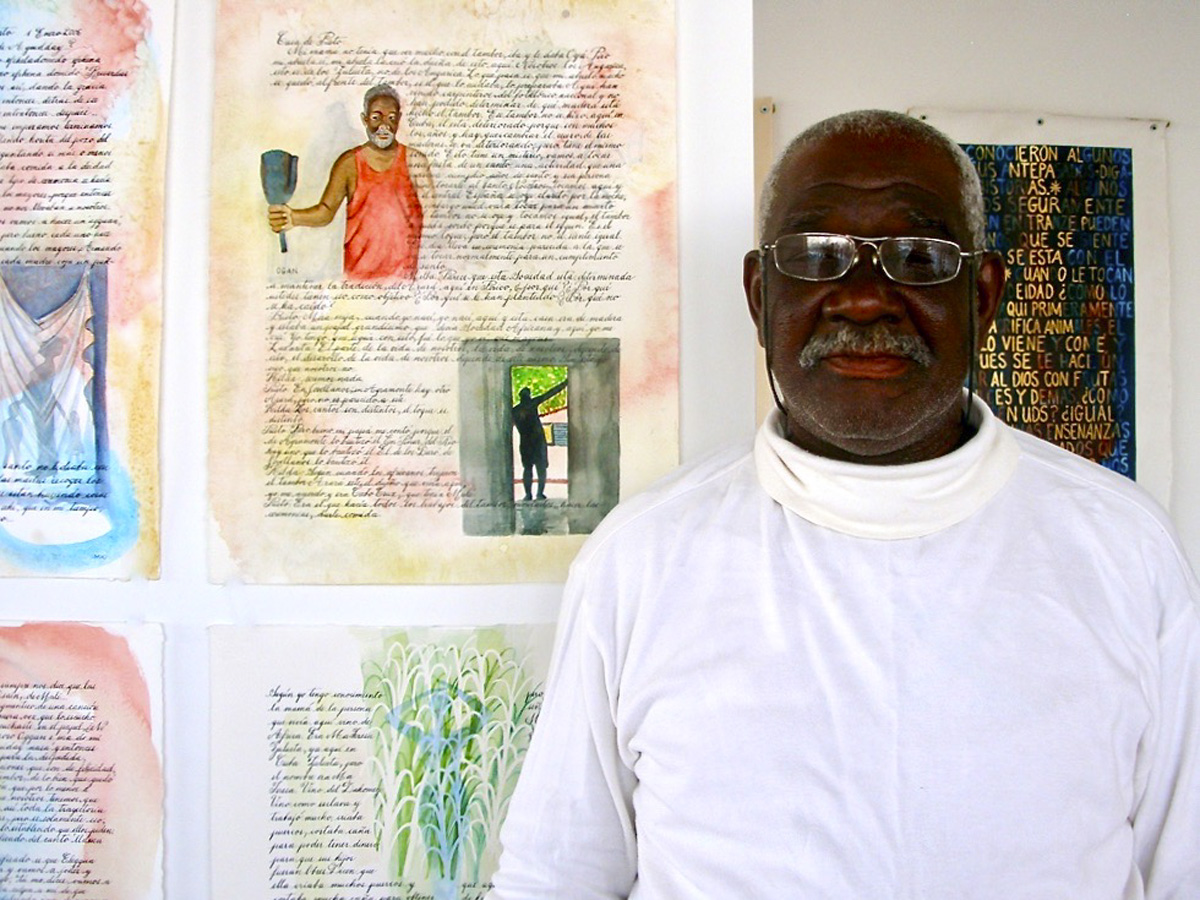 Prieto in front of his portrait, image by Susan Matthews 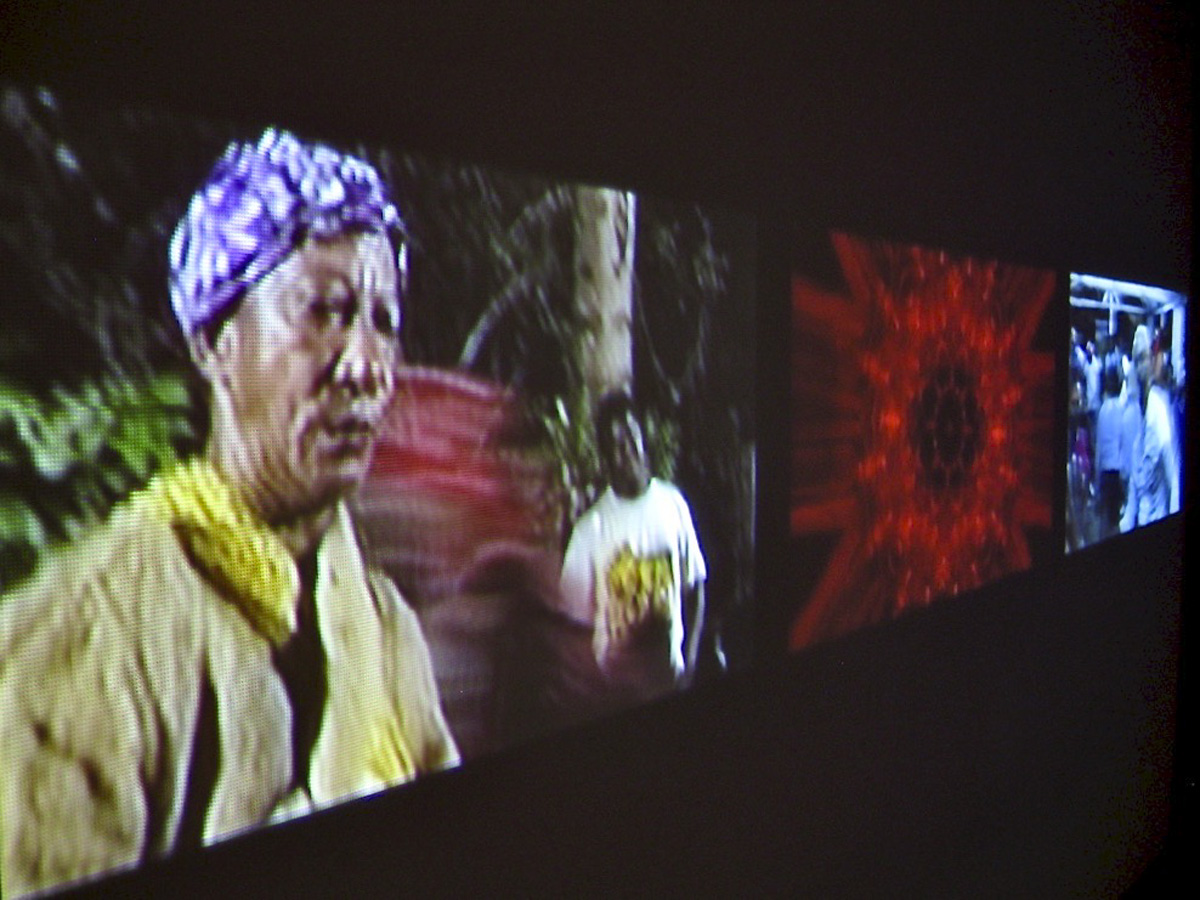 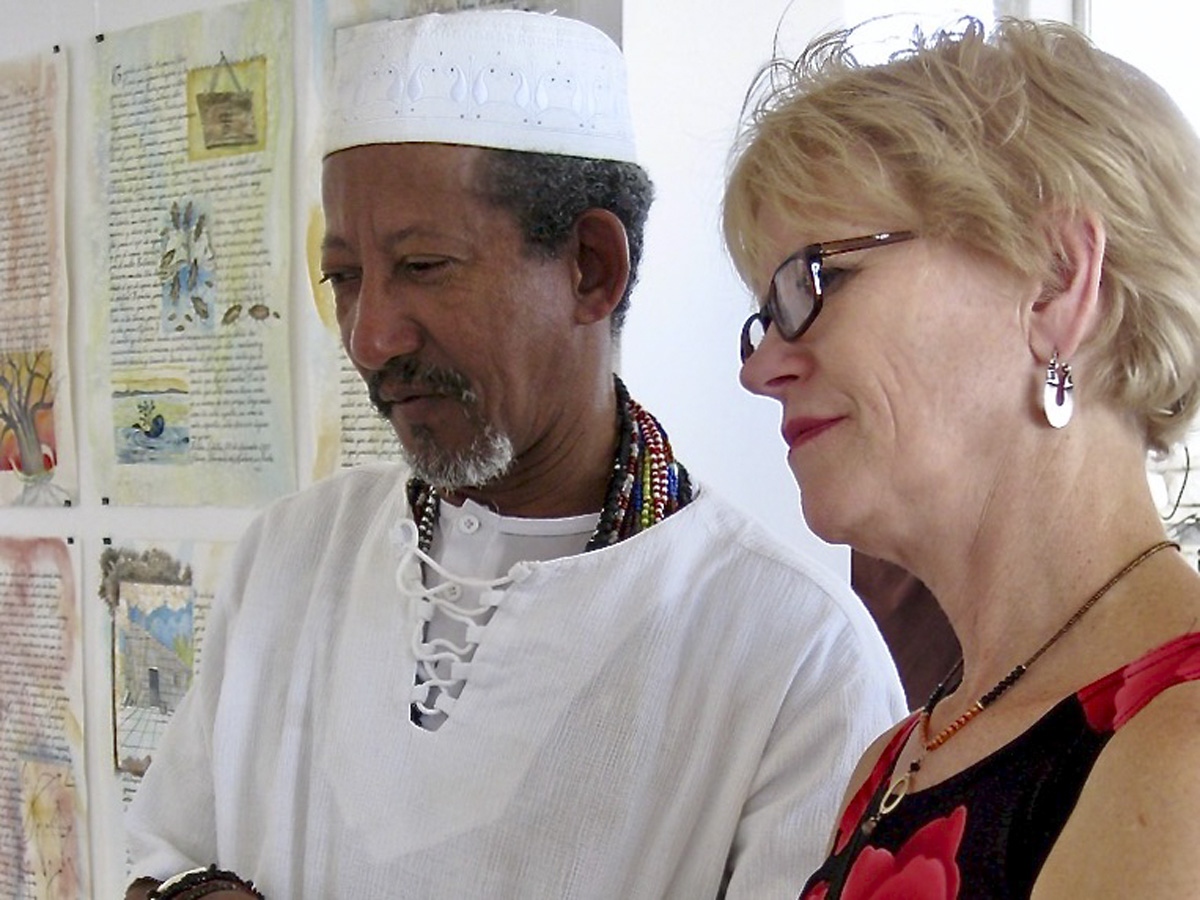 Roberto's Altar and The Women from Dzodze 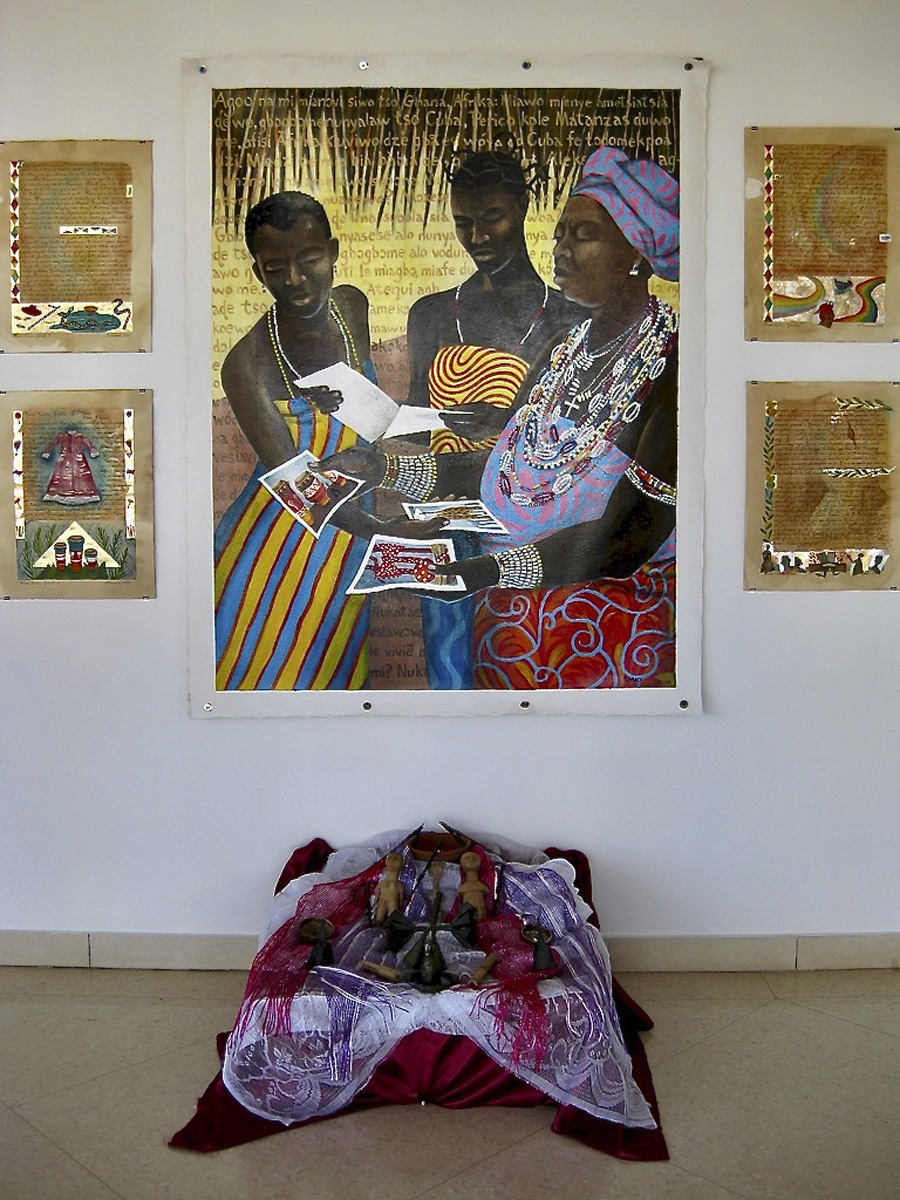 Roberto Pedroso García, one of our collaborators, is deeply embedded in religious life in Cuba. He is originally from Colón, a town situated between sugar cane fields near Perico. Many people in Perico remember him from childhood.  He is known in his spiritual community for creating beautiful, artistic altars. The altar he created for Secrets Under the Skin brings together many aspects of the project. On the altar he placed religious objects from Ghana and Cuba, ash from Alaska, earth from Cuba, and sand from the Slave Coast of Ghana.  As is customary, he unified the altar with large amounts of flowing cloth. The altar is placed beneath the painting of the Women from Dzodze, Ghana, who are shown viewing photos of sacred objects from Perico. These two pieces show the connection between the traditions in Dzodze and Perico.

Unless otherwise noted, all images by Brian Jeffery