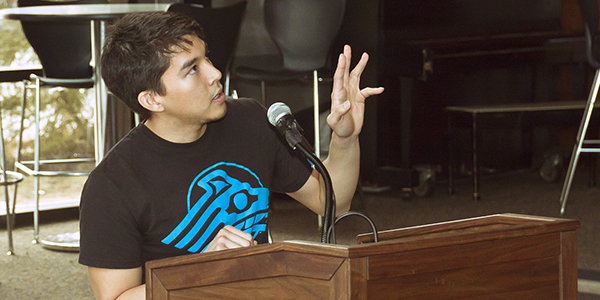 Now a UAA alumni, Kyle Worl studied Anthropology and earned his minor in Alaska Native Studies. After his parents convinced him to stay in state until he decided on a major, he pursued his interest in learning about Alaska Native culture. At first, Kyle did not realize that staying in Anchorage would allow him to become grounded in the Anchorage and Alaska Native community. The Alaska Native Heritage Center began to stir his interests in who he is and where he came from by teaching him about his ancestors.

The Alaska Native Studies courses he took instilled in him a respect for the Alaska Native people, land, and history. Kyle feels that learning about your culture and the history of your people becomes more than educational; it allows us to learn about lost traditions and historical events that affected Alaska Native people. The Alaska Native Studies minor supports his future career as an anthropologist, because it allows him to move forward by being grounded in history. Kyle believes that to help people in need the first step is to be educated about the history of the people to fully understand political, educational, and social issues.

Mr. Worl feels that the Alaska Native Studies minor allows people to gain a new perspective on Alaska Native culture and people, because it is taught through an Alaskan Native perspective in a respectful manner of all cultures. Kyle considers these insights to history may also tie into other cultures or Indigenous groups, because of the many similarities in traditions, values, or historical events. He also mentioned that even though indigenous groups may be divided geographically the ability to work together is reinforced through cultural ties. Through these cultural ties Kyle hopes to increase the language revitalization movement by sharing or teaching through language circles to people from all backgrounds. He is passionate about Native languages, because within a language is culture, traditions, and history. It is the core of a culture; it is a foundation of who Kyle Worl is as an Alaskan Native. He says it has become a personal concern as well as a community issue.

“It allows you to leave the shame behind when you learn who our people really are from an Alaskan Native perspective.”