Two members of the College of Health community were honored as emeritus faculty at an award ceremony on April 27. The status of emeritus is the highest honor that can be bestowed upon retiring faculty who have attained the rank of full professor and dedicated at least 10 years of faithful service to UAA. Members nominated for the rank are evaluated by their supervisor, a campus wide committee of peers, the provost, and the chancellor. 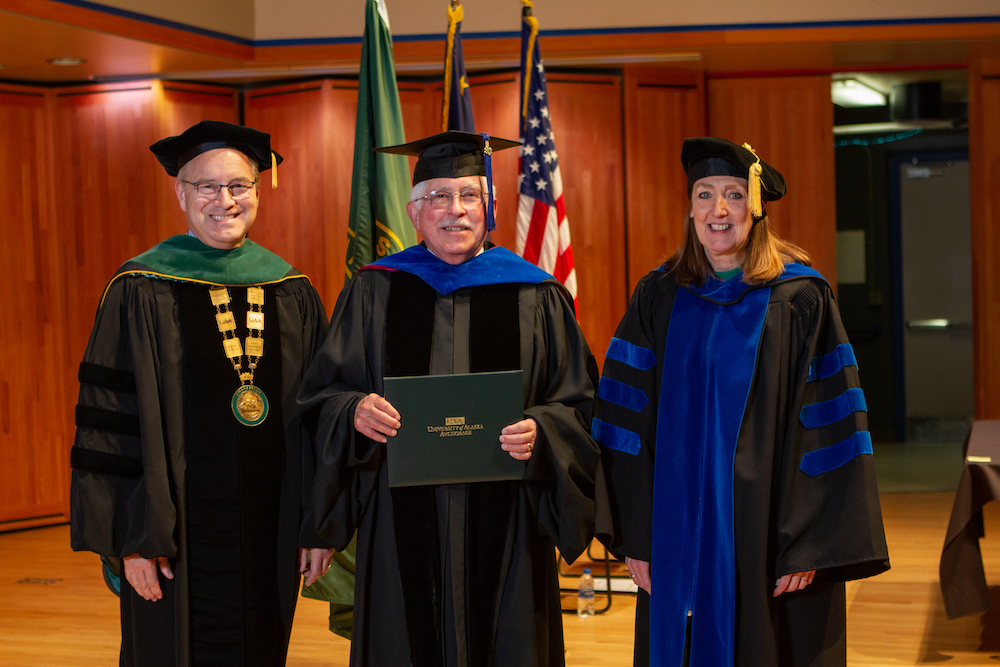 Allan Barnes was named professor emeritus of justice in the College of Health. Barnes received his Ph.D. in Criminology from Florida State University in 1983 and has been at UAA for 38 years. His research, instruction, and mentoring of faculty and students has had a lasting impact on the university and multiple generations of Alaska criminal justice practitioners.

Barnes served as the first director of Alaska’s federally designated Statistical Analysis Center (SAC), the first SAC to be housed within a university rather than within the executive branch of state government. The SAC has now evolved into the Alaska Justice Information Center, which continues to carry on the same mission and vision, and there are now seven university-housed SACs across the nation following this successful model. He has served on the boards of many local organizations, chaired numerous UAA committees, provided testimony to the Alaska Legislature, and produced a number of articles and reports on a wide variety of justice topics.

Barnes has also been an instructional leader in the university. He was an early adopter of  process-oriented guided inquiry learning (POGIL) and presented pedagogical research at international conferences. He collaborated with UAA’s Academic Innovations and eLearning to establish the Justice Center’s digital story center. He has contributed to the development of UAA’s institutional and academic program assessment efforts, and he has maintained an active presence in the design, oversight, and assessment of curriculum in the Justice Center and the College of Health. He mentored students and faculty and served as the faculty advisor for Alpha Phi Sigma and the Justice Center’s Alumni liaison.

“In my 15 years as a university professor, I have yet to encounter someone as dedicated to pedagogical innovation and development, student learning, student success, and the rigorous assessment of academic curricula as Dr. Barnes,” said Brad Myrstol, director of the UAA Justice Center.

“Dr. Barnes has been a mentor to countless students, myself included,” said Rob Henderson, Assistant Professor of Justice. Henderson first came to UAA as an undergraduate student seeking a justice degree in 1994. “When I joined the faculty in 2019 as an assistant professor, Dr. Barnes, once again, offered me advice, guidance, and insight into the academy.”

“Each of us can say that we’ve encountered no more generous professional mentor,” wrote the Justice Center faculty in a unanimous letter of recommendation for Barnes’ appointment as professor emeritus. “In sharing his experience with newer colleagues, the passion he has for serving our students and providing the highest possible academic experience is contagious. Dr. Barnes’s genuine affection for his students, and his faith in their abilities, has inspired countless other faculty over the years.

“Thanks to Dr. Barnes’s inspiration, leadership,and mentoring, there now exists across the state of Alaska a network of individuals, spanning multiple generations and at all levels of government, committed to improving the justice system in Alaska. His influence will emanate from these former students throughout their careers, benefitting the state in myriad ways for years to come.” 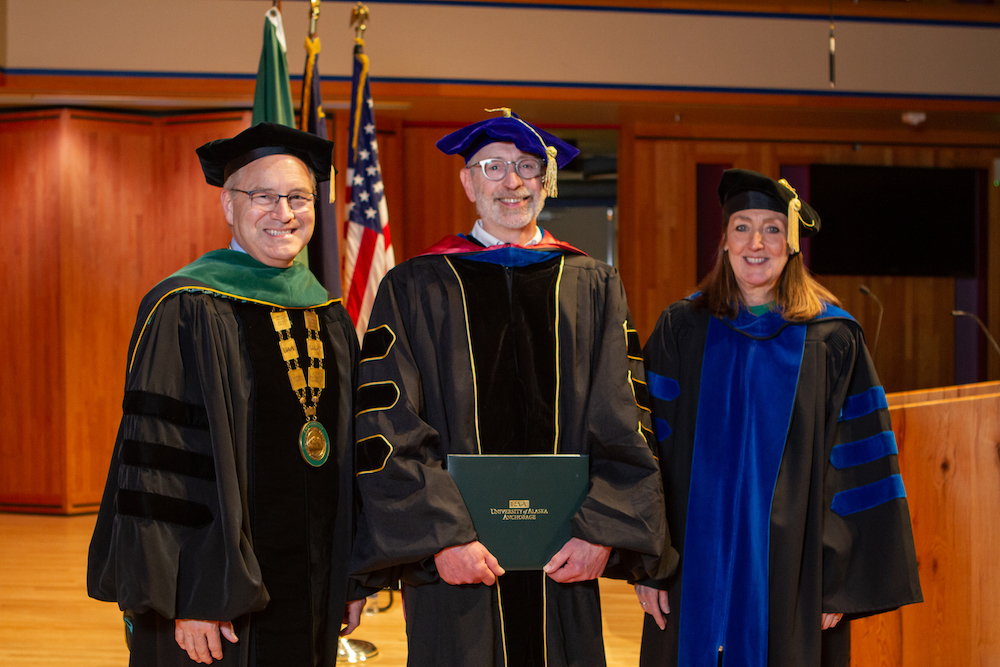 John Petraitis was named professor emeritus of psychology in the College of Arts and Sciences (CAS). Petraitis currently serves as the interim director of the Division of Population Health Sciences and is retiring after 30 years of service at UAA. He has made contributions through innovative instruction, curriculum development, research, and administrative leadership.

Petraitis has been a leader in innovative instruction and curriculum development. He has taught critical courses at all levels of the curriculum, ranging from introductory to practicum courses, and developed core psychology courses and materials. He was an early adopter of making online classes fully accessible and engaged in high-impact teaching activities aimed at increasing student persistence, retention, and graduation rates. He engaged students in undergraduate research and mentoring. In honor of his exemplary teaching, he was awarded with the UAA Chancellor’s Award for Excellence in Teaching in 2017.

Petraitis published approximately 30 articles and co-authored approximately 40 conference presentations across multiple subfields including social psychology, behavioral health, and evolutionary psychology. Papers such as his 2014 study examining the relationship between risk-taking behaviors and attractiveness have been cited in literature and garnered national attention.

In addition to his roles in instruction and research, Petraitis has served the university in various leadership roles. He has been chair of the Department of Psychology, faculty senate president, and chair of UA Faculty Alliance, where he spearheaded efforts to incorporate diversity, equity, inclusion, and accessibility into Faculty Evaluation Guidelines. He has served on numerous workgroups, task forces, and committees including the UA Academic Structure Working Group for Arts, Humanities, Natural and Social Sciences, the UA Statewide e-Lab Taskforce, and the UAA Graduate Academic Board, to name a few. He was the associate dean of the Division of Social Sciences, interim dean of the College of Arts and Sciences, and interim director for the Division of Population Health Sciences in the College of Health.

“What impressed me about John was that he led by example. He would not ask faculty to do what he was unwilling to take on himself,” said Eric Murphy, director of the Department of Psychology. “John leads by example.”

“Dr. Petraitis has demonstrated his love of teaching through the consistently excellent preparations of his courses that are best understood through the high praise and enduring admiration of his students and our alumni,” wrote psychology faculty in a letter of recommendation for Petraitis' appointment as professor emeritus. “He has been a dedicated servant leader and, when called, has consistently stepped up into challenging circumstances to lead... Despite the very trying times and difficult decisions he faced, he always kept his eye on what was best for the students and the university.”