My individual artistic contribution to this installation is a video format that I call Performance-Based Video. For me, this format expands the possibilities of movement composition and structure by literally pushing the boundaries of dance -- motion, rhythm, form and gravity -- beyond what can be captured on stage.

As a dance researcher, not only have I danced at ritual ceremonies in West Africa and Cuba, but I have spent significant time behind the camera lens in the field, a process that is the catalyst for my current artistic direction. During my years of fieldwork, I examined underlying aesthetic groundings of the dances I danced and witnessed, examined gestures and processes of ritual, and I examined themes resonant and shared in various elder oral history interviews. I drew upon these, not for the re-creation of these dances, but as source material and inspiration for new movement invention and for thematic movement ideas for film. 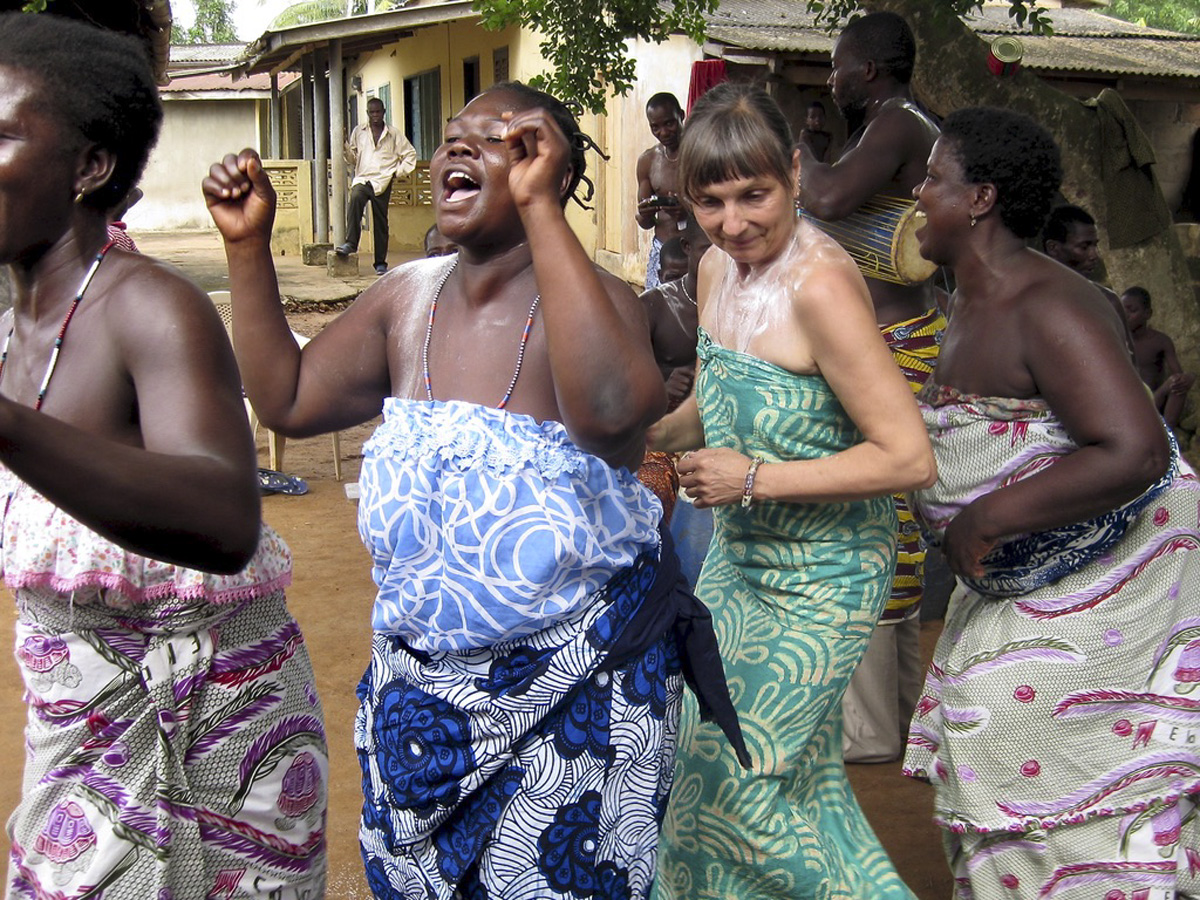 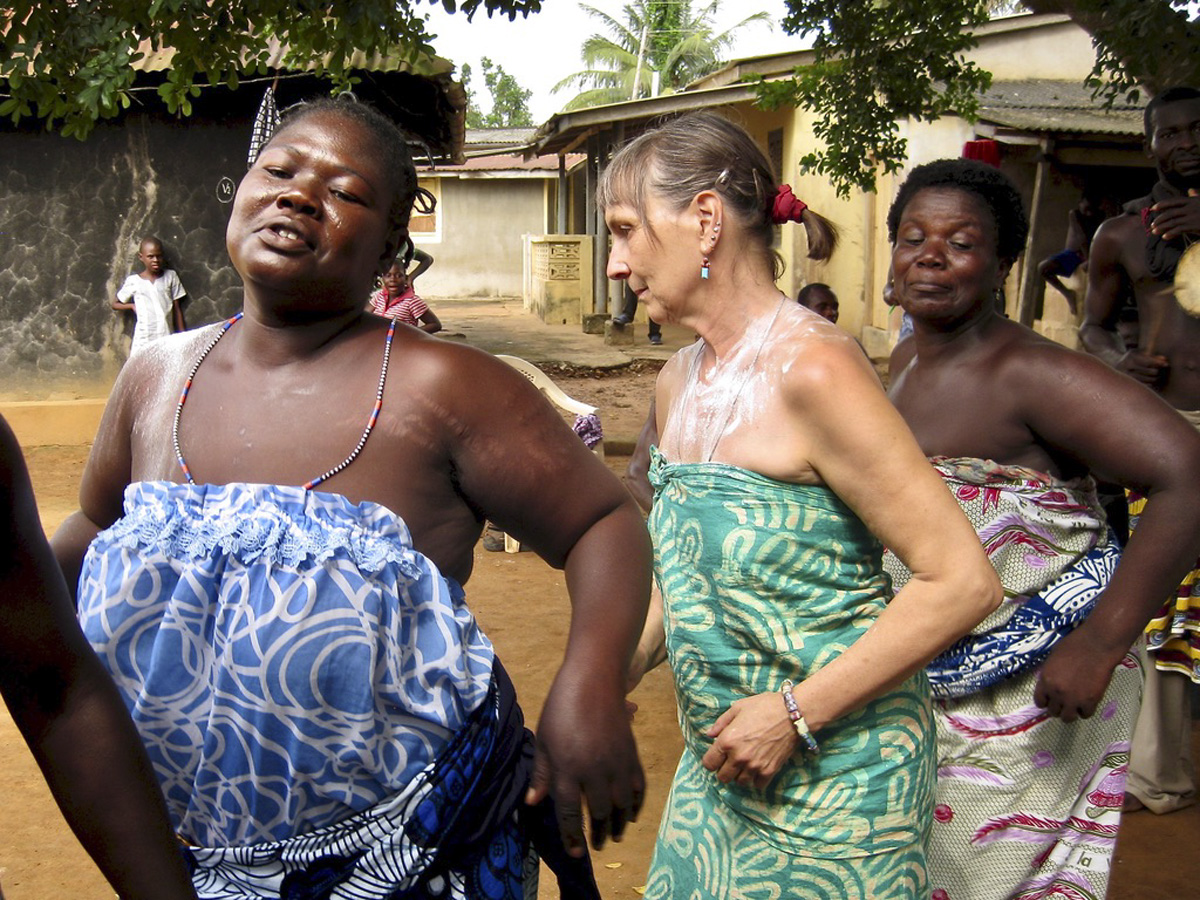 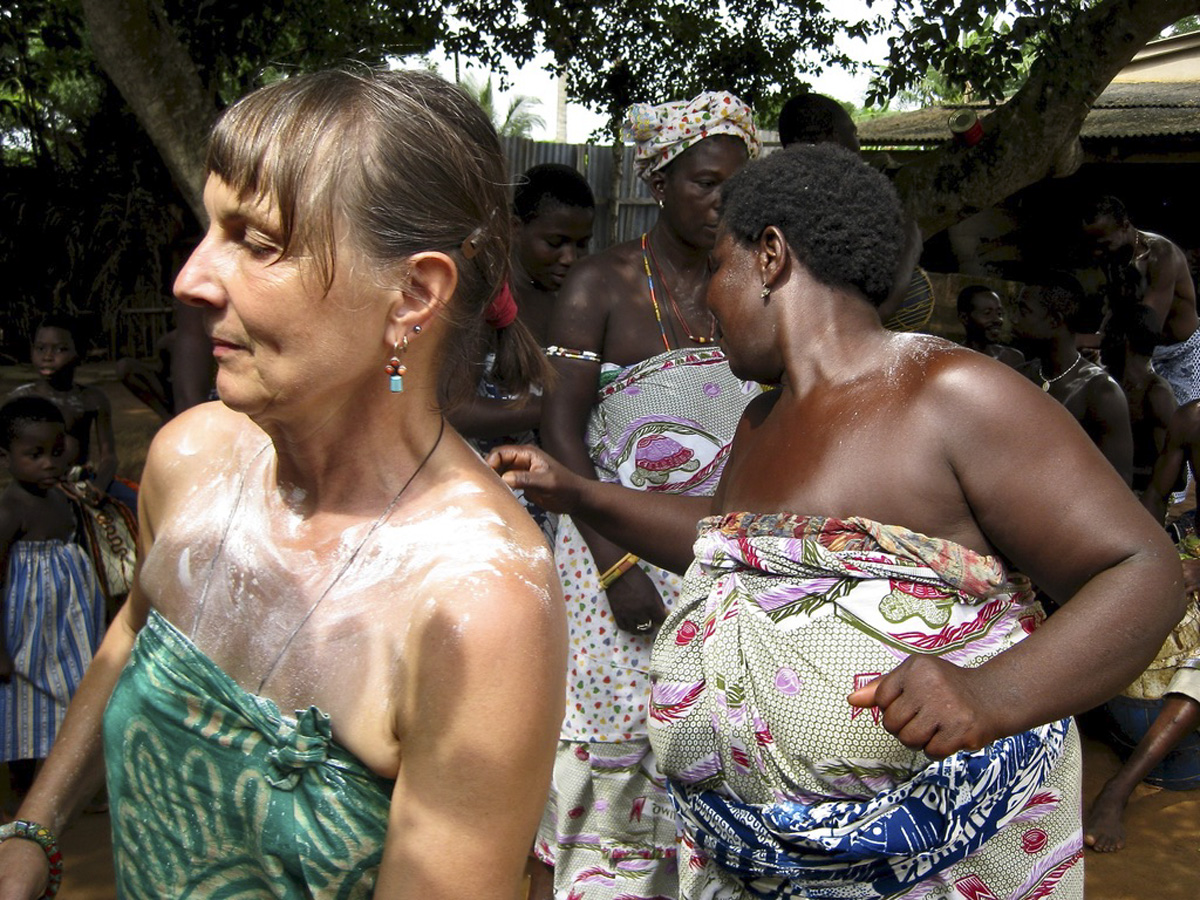 As a dancer and choreographer, this project is an evocative new direction as it pushes me past old artistic boundaries and definitions of dance. It has encouraged me to explore dance from new perspectives; to be a contemporary artist inspired by tradition. I have been moved by the stories that ground the dances of those I have danced beside. And I have been moved by the efficacy of ritual dance. Yet what I create is not a copy, it is not even an alteration of existing traditional dances. It is new movement invention influenced by conceptual structures of ritual practices.

Jill Flanders Crosby with women of Dzodze, Ghana in 1991.

Importantly, as an artist-researcher, I, as well as the rest of the creative team behind this project embrace what we call art-as-ethnography; a blurring of boundaries that produce "productive tensions" (Elliott and Culhane 2017) agitating rather than defending disciplinary borders. We view art-as-ethnography as relevant to ethnographers, historians, and documentarians who play at the edges of scholarship and art-making. It especially aims at arts-makers who conduct historical and ethnographic research and transform that research into artistic presentations and performances.

About the Secrets Under the Skin Performance-Based Videos

The original idea for the Performance-Based Videos was first conceived while I was witness to a religious ceremony in Nogokpo, Volta Region, Ghana. Deeply moved, I began to imagine how the images of that day could be re-imagined as contemporary choreography. Then in December 2008, Melba Núñez Isalbe, Roberto Pedroso García and I were riding back from Perico late one night in a friend's VW van on our way back to Havana. Roberto and I were singing at the top of our lungs to a contemporary rock CD when we began to extrapolate Arará gestures to this contemporary music. We started giving them a new voice as we played with them in different combinations and movement pathways. It was this night that my Performance-Based Videos began their own journey. 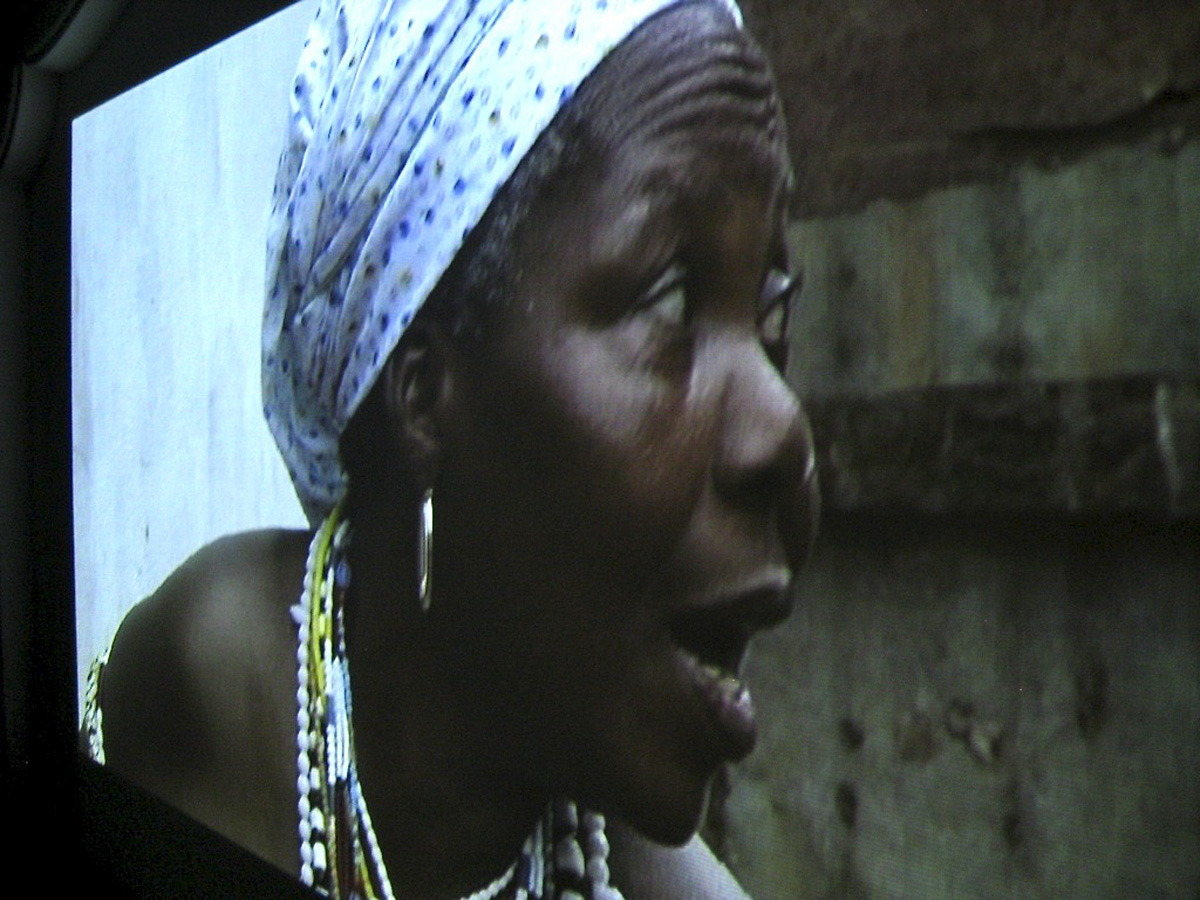 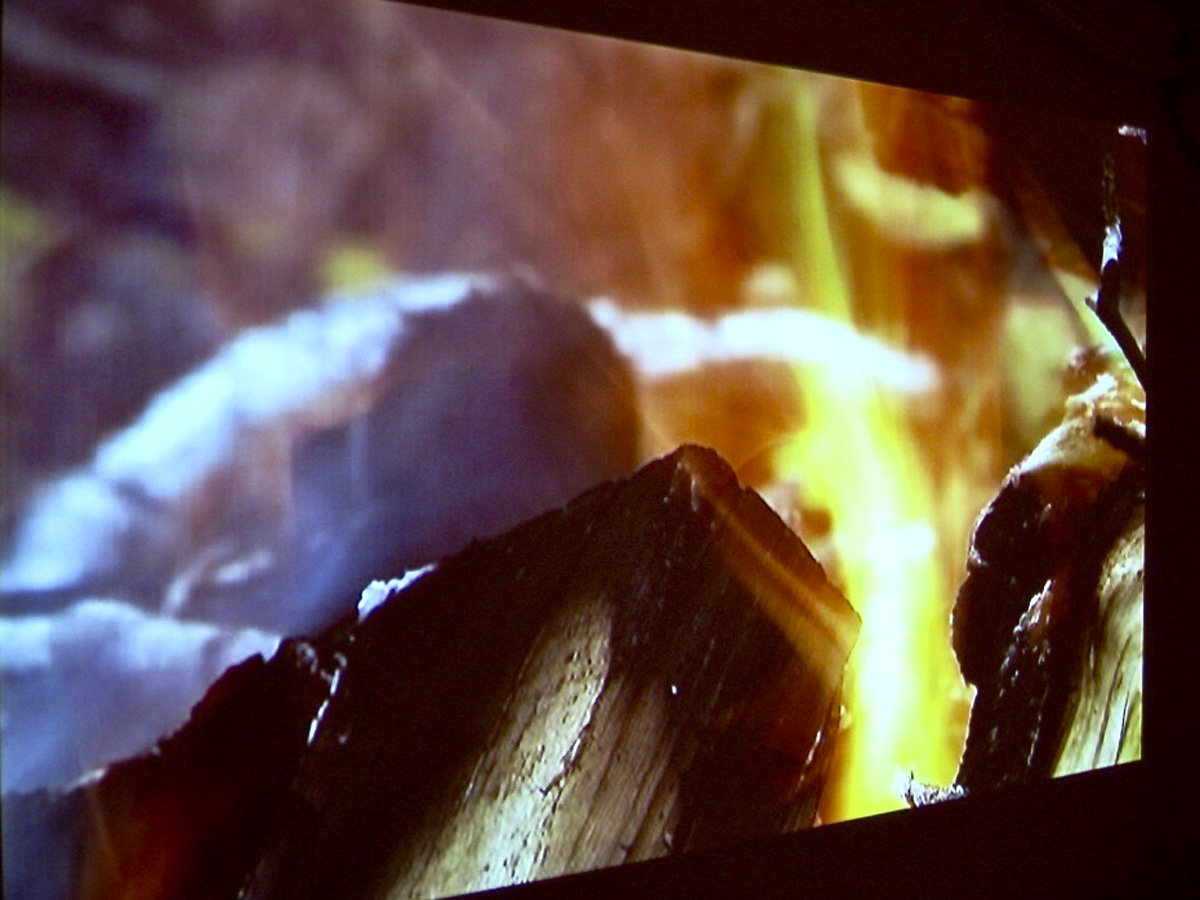 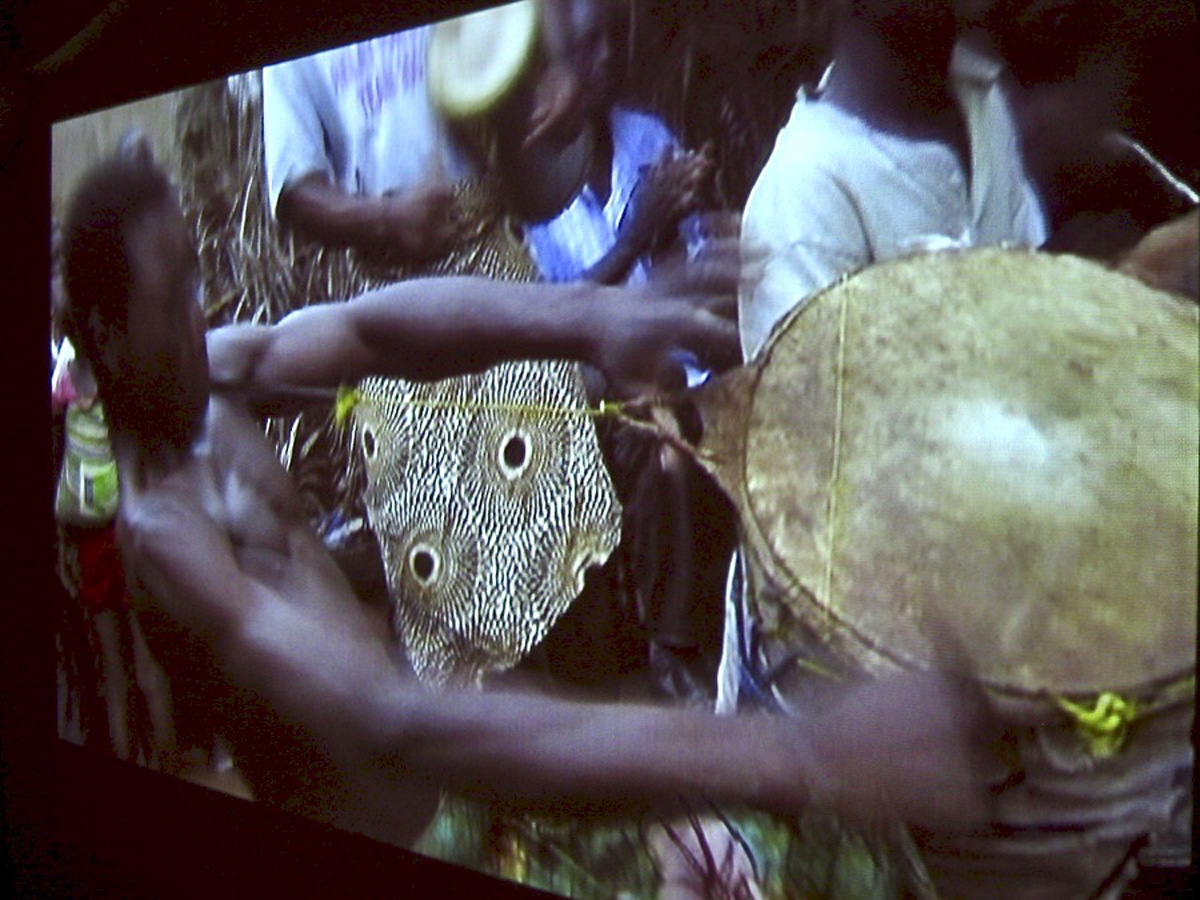 I worked with Progressive Media Alaska and with colleague Brian Jeffery to film segments of contemporary movement material I created in response to field experiences. The first performance in the spring of 2009 was live choreography performed at the University of Alaska Anchorage in front of three screens filled with edited fieldwork images. This performance was filmed for eventual integration into the Performance-Based Videos. Additional material was filmed later that year in Cuba. In the summer of 2010, Brian Jeffery and I traveled to Ghana and Togo to finish the filming process. We worked together to conceive and create conceptual images that could support identified thematic ideas. We then expanded these ideas with dancers from the Ghana Dance Ensemble. Edited portions of all contemporary material were integrated with edited fieldwork recordings from Ghana, Togo, and Cuba to create four separate films segments. Each segment drew inspiration from one of the four elements (water, air, earth, and fire) as an organizing visual and conceptual metaphor.

Water. (2010) Water was designed to loosely portray the story of Justo Zulueta, an elder from Perico and his African ancestors. See Susan Matthews' manuscripts, Justo's Consecration with Oddu, and The Cockroach Manuscript for further details. I also worked with the ideas of secrets and memories contained, carried and left behind.
Air. (2010) Air was designed around the idea of gestures found in the dances of the Ewe in Dzodze and Adjodogou, the Arará dances in Perico and Agramonte, and gestures seen during ceremony. It also explores the ideas of bell ringing to call the deities – sounds carried in the air - and the beginning of the first stages of ritual ceremonies.
Earth. (2010) Earth explores journeys – journeys to new places, into the depth of ritual ceremony, or into the depths of artistic exploration and performance.
Fire. (2010) Fire is the moment that it arrives, whatever that is for each of us.