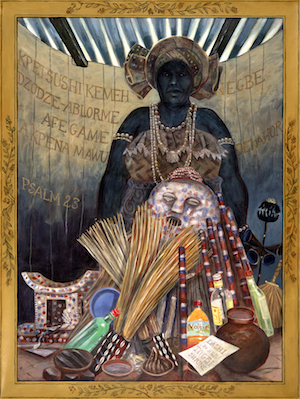 Dashi is a priestess in Dzodze, Ghana.  Our project director, Jill Flanders Crosby, has known Dashi for many years. In the summer of 2013 the Secrets Under the Skin collaborative team visited Dzodze. We were invited into Dashi's shrine for Togbi. Togbi (also known as Sakpata) is a deity who is syncretized with San Lazaro in Perico, Matanzas province, Cuba. Dashi, who is also known as Kpetsushi, accepted offerings for her shrine, including a full bottle of gin, which she poured directly into the mouth of the deity. As it was consumed by Togbi it entering directly into the earth within the shrine.  After many offerings, prayers and readings, Dashi was able to obtain permission from Togbi to be photographed and painted in her shrine. Without explicit permission I would not have painted her in this sacred space.
Contributing Artists & Their Work
small
PHONE
lsmall
Large PHONE
medium
TABLET
large
DESKTOP
xlarge
HD
xxlarge
2k
xxxlarge
4k