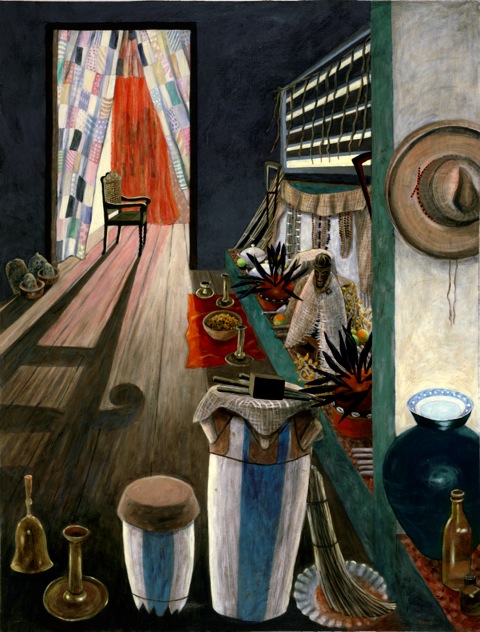 El Cabildo de Ma Gose is a shrine in Agramonte, Matanzas Province, Cuba.  It was established during the slave trade and officiated by an African woman named Ma Gose.  The altar to San Lazaro pictured is one of several altars actively maintained in this sacred space.  It contains offerings, symbolic objects, drums and bells that are used to call the spirits of ancestors and to pay homage to San Lazaro.  On the left side of the painting are two elegguas which are very similar in appearance to elegguas we have seen in Dzodze, Ghana, and Adjodogou, Togo.  The drums  were made by the first enslaved Africans in the area, and are still played during special ceremonies.  The two people barely visible behind the red curtain are the elders who maintain the cabildo today. The shrine is a direct link to the unbroken African tradition still practiced in Agaramonte.
Contributing Artists & Their Work
small
PHONE
lsmall
Large PHONE
medium
TABLET
large
DESKTOP
xlarge
HD
xxlarge
2k
xxxlarge
4k