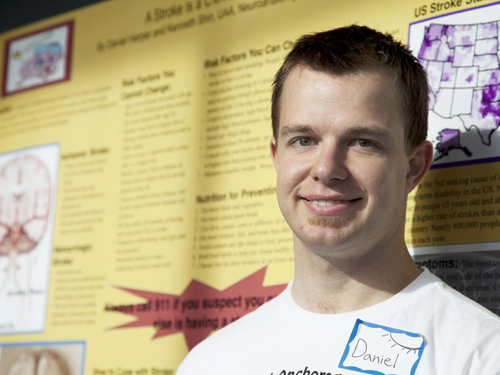 If you could be a superhero for a day, what would your superpower be? X-ray vision, the ability to read people's minds? Well, if you were to ask UAA's BioSci Alumnus Daniel Harper this question, he may have to spring for a more inventive answer. For Daniel, the ability to see inside the human brain will soon be an everyday reality. Daniel is currently in his first year of medical school at LSU'S Health Sciences Center in Shreveport and hopes to enroll in a dual residency program in diagnostic and interventional radiology (IR)—a program so new and cutting-edge within the institution, it won't be offered for the next two years.

What exactly is neurointerventional radiology you might ask? Neurointerventional radiology is a subspecialty of IR that uses minimally invasive, endovascular procedures aimed at preventing strokes, cerebral aneurysms and other life threatening conditions of the central nervous system. These procedures allow physicians to see inside the brains of their patients much like a superhero; moreover, conducting these procedures requires a hand more steady than superman. The procedure is performed by inserting a catheter in the groin area of the patient. From there, the physician slides the catheter through the femoral artery into the aortic arch of the heart. The catheter is then strung through the carotid artery and into the vascular system of the brain where physicians use radio imaging to visualize what exactly is occurring inside. Daniel says of the procedure, "You are actually inside the vascular system with the catheter and you can use that to do various things—a lot of the time, what they are inserting is a stent, which can expand an occluded artery and allow blood to flow to the affected portion of the brain. If you have someone who has had an aneurism and there is a risk of rupturing, they can insert a coil which…basically allow clots to form around them in the aneurism, closing it off so that the blood pressure doesn't continue to push it…it keeps it from rupturing and keeps the patient from having a hemorrhagic stroke. They deal a lot with strokes and preventing those by either opening up vessels or preventing vessels that are about to break from breaking." Watching the procedure being conducted is something like a video game and just being in the lab evokes the feeling that something very cool is about to happen. Daniel describes the thrill of experiencing it firsthand saying, "They have the neurointerventional radiologists suite where they have probably eight big computer screens up on this display which they can move around…they have machines where they can have the x-ray spin 360 degrees along different planes around the person's head and can create a three-dimensional image and basically thread in the catheter and watch it go through with live time x-rays, like a videogame on the screen, following it up to where it needs to go. It's pretty neat." For many, describing the experience as 'pretty neat' would be an understatement. 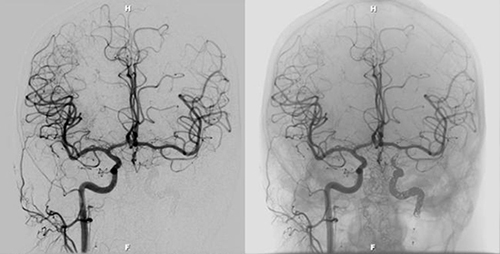 When you learn what Daniel is currently doing to pursue his career goals, it is almost unimaginable to think that he has already received two baccalaureate degrees as well as receiving teacher certification in the state of Louisiana. This amounts to a lot of accomplishment for a guy who once didn't know what he wanted to become when he grew up. As a student at Chugiak High School, Daniel struggled with the decisions of what to do and who to become. "The first couple of years of high school were pretty rocky, I didn't know what I wanted to do…so I decided that I was going to go to the Career Resources Center in the library at Chugiak. I took a professional skills test and it gave me a list of career options. One of them was to become a physician, and so I kept that in the back of my mind." At that point, Daniel decided to take the plunge into science, and he enrolled in a Human Anatomy and Physiology course. "I decided to take an elective in Human Anatomy and Physiology, and I really just chose that option because the other options didn't look that great. When I got into the class, I remember the teacher made this announcement that we were the fortunate few who made it in and that it was a highly sought after elective—I was just trying to take the lesser of evils, so to speak!" The lesser of evils turned out to be one of those pivotal classes he would take throughout his academic career which would lead him to the path he is currently traveling down. The content of the course engaged Daniel and began to plant a seed of interest that would last a lifetime—and the physicality of the course didn't hurt either, "It really appealed to me as a kind of hands on guy. I was very athletic and really didn't like school, so to be able to dissect things with my hands, interact and walk-around, that was really cool. So that's really where it started, I decided to pursue the interest and it kind of snowballed…that's how I eventually wound up here."

Though the biology seed had been planted deep within the mind of young Daniel, upon graduating from high school in 2003, he decided to become a commercial fisherman. It wasn't long, however, until his thirst for more came back around and he decided to pursue higher education. Daniel began applying for scholarships and ended up receiving enough to cover tuition, including a room and board scholarship from the Southern Baptist Convention to attend Mississippi College. At Mississippi College, he studied biology and nursing, and from there he transferred to Wesley University and finished his degree in Christian Counseling. With one degree under his belt, Daniel decided to head back to the Last Frontier to further carve a path for himself within the medical field. "I started UAA with the knowledge that I was going to be pursuing those pre-med courses, completing a second bachelor's degree for the sake of getting into medical school…I had really wanted to go into medicine from my freshman year at Mississippi College, and actually I did a pre-med program there and I also did nursing school there. It just kind of reignited that interest for me and by the time I finished at UAA, I had over 300 college credit hours!"

Daniel entered the B.S. in Natural Sciences degree program in 2010 and shortly after in 2012 received his degree. One of the most valuable experiences while attending UAA was the research experience he gained while working under the guidance of Dr. Jonathan Stecyk. Dr. Stecyk put Daniel to work on a project studying the crucian carp, "Dr. Stecyk does a lot of work with anoxic-tolerant species…specifically, I was working on the crucian carp…we were looking at the morphology of the gills and how temperature change and oxygen content level changes in the water can affect the different ion channels within the gill…we looked at the ATPase pump within the gill samples. He was using that as one building block to decide exactly what is going on with the fish's ability to survive without oxygen throughout the year." The project was not necessarily in Daniel's wheelhouse, but he eagerly approached the opportunity to work with Dr. Stecyk in the lab. "For me personally, it helped me to see what laboratory research would be like and to become familiar with reading research, and then also implementing and using lab research equipment—it was kind of intimidating to think about research, I kind of had to reach out and find a project. It was really through another friend interested in medicine that I got involved with it. Had he not prompted me, I would not have contacted Dr. Stecyk. So it worked out perfectly and I'm glad that I got to do that. It was a great introduction experience for me in terms of research." 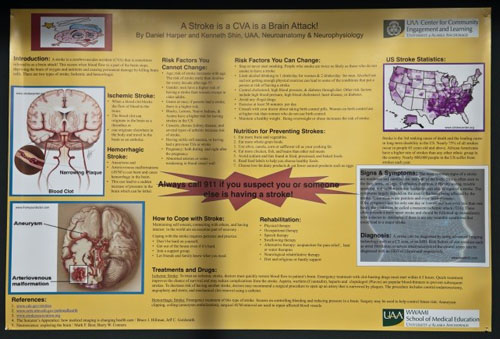 Getting into medical school demands hard spent hours in the lab; it means being entrenched in research from the time you wake up to the time you fall asleep. The experiences in the lab that Daniel had while working as a Research Assistant for Dr. Stecyk proved to be invaluable and truly prepared him for the intensive program at LSU. During his time at UAA, Daniel also received the valuable work experience that is necessary to stay competitive within the medical field. Daniel worked as a Medical Assistant for the Alaska Medicare Clinic, worked as a Medical Scribe in the Emergency Room at Providence Alaska Medical Center, and also shadowed countless doctors including Otolaryngologist Dr. Creed Mamikunian. The experiences he had while working in the medical field, coupled with the courses he was taking at UAA, gave Daniel the insight he needed to stay firm in his decision to follow his dreams of becoming a physician.

While he has only been at LSU for a year, Daniel has become acclimated to the fast pace of medical school saying, "I have been spending a good amount of time with my Principal Investigative Research Physician. He's been really helpful as I've been getting started. I've had to do a good number of hours doing pre-research preparation—completing disclosures of financial interest, research history and a variety of other things related to HIPAA because I will be accessing patient charts and historical data. He has also been allowing me to come in and observe him, teaching me various things about what he does so that I will understand when I'm looking up information for research purposes." The lofty goal of the team is to finish Daniel's first research project by the end of this summer, which constitutes a large, foundational portion of the research he will be conducting throughout his time in the program. For right now, Daniel has his eyes focused on the present but is always thinking about the future, "I just have my sights on that for now—medical school has been fun and very challenging in a variety of ways, so I'm just hoping to hang in there. I think that my third and fourth year clinical rotations will be something to look forward to, and in my fourth year, I'll have more time to relax and plan for things."

Daniel's work as a medical student at LSU allows him to be in the past, present and future all at one time—seeing the possibilities of how the patient had gotten into their situation, how he can remedy it in the present, and prevent future complications from arising. In essence, Daniel has the powers of a superhero, all made possible through science and technology. So, if we were to ask you what your superpower would be, you might want to reconsider the question—remember, the possibilities are endless with an education in the sciences.