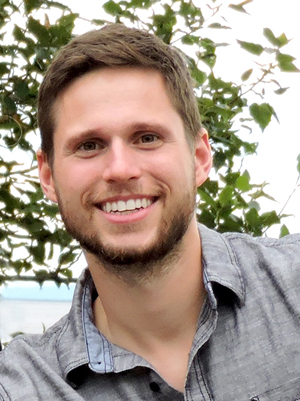 Shawn Roys graduated cum laude with a Bachelor of Science degree in Natural Sciences and a minor in Psychology from UAA in the spring of 2012, and in just a few short years, he has become one of the top graduates from the prestigious Doctor of Physical Therapy (DPT) program at the University of Southern California (USC). Shawn’s highly interdisciplinary approach to his undergraduate degree had lent him some serious credibility when applying to programs, however, the things he learned at UAA have served him far beyond getting admitted to the DPT program at USC. Playing an important role in the healing of his patient’s bodies coupled with his ability to understand their mental struggles, Shawn has taken on the knowledge that through his education he is in the unique position to change lives, and that is what he aims to do first and foremost.

For the first three years of his program at UAA, Shawn was enrolled as a Biological Sciences major which allowed him to wait until the last minute to choose between going to medical school and physical therapy school. Both had been of interest to him growing up, but when it came to interacting with patients, Shawn decided that the age old adage ‘less is more’ just didn’t apply to his own views; “I wasn’t sure about whether I wanted to go to Med school or to PT school—I had my eyes on WWAMI initially until I started doing my observations with physicians and physical therapists… [I worked with] Amber Hahn and that was the best experience that I had before actually applying. That really sealed the deal of wanting to become a physical therapist rather than a physician just because of the amount of time that physical therapists have to spend with their patients. It’s very unique and I was very drawn to that,” said Shawn of his program decision, and what an amazing decision it would turn out to be. 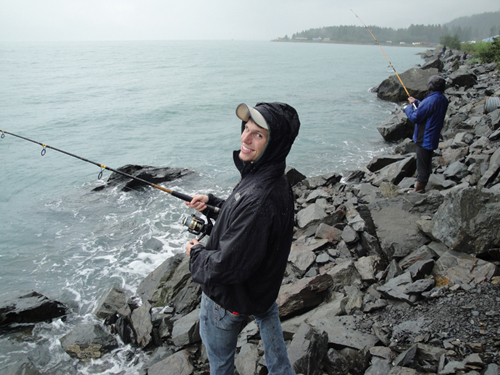 The advisors Shawn worked with made sure that the courses he took were those that would best prepare him for the intensive DPT programs, something Shawn attributes to his success once making the transition, “working with the councilors there, they did everything they could to make sure that the degree I earned was what I needed to move forward…I felt so prepared going into grad school—it was excellent!” Shawn took the routine Biological Sciences courses that most BioSci majors will encounter throughout their programs, however, in switching to Natural Sciences, he was able to pick and choose from other disciplines to create an academic resume that was seemingly tailor-made for a promising young physical therapist-to-be. Classes such as Human Gross Anatomy with Dr. David Pfeiffer (Biological Sciences) and Human Physiology with Dr. Robert Furilla (WWAMI) were pivotal in taking his thought processes from standard rote memorization to critically thinking about issues and finding viable solutions. When speaking of Human Gross Anatomy with Dr. Pfeiffer, Shawn said, “A lot of classes, especially in undergrad, are designed for exposure and they cover an enormous amount of material and inherently they become a lot about memorization…while the volume was still large with Human Gross Anatomy, the goal was to teach you how to problem solve and think as if you were a clinician, and you had to come up with a diagnosis—it really pushed me, that class was very difficult.” The curriculum in these courses wasn’t all that was challenging, the way the faculty members taught the students pushed them to become better versions of themselves as well. The instructors demanded a high level of participation and treated the students with a respect that’s typically only reserved for their peer scientists, “The instructors that taught the upper division classes and were also part of the WWAMI program, they all taught medical students and then came and taught the undergrads. What was special about that is that it felt like they taught us differently, as if we were already graduate students or professionals. You kind of forget yourself that you are a student and start to behave like a professional before you even realize that is what you are doing…there was a big shift in the way I viewed myself as a student, I felt like I was truly transitioning, and I owed a lot of that to the interactions I had with the faculty there.” 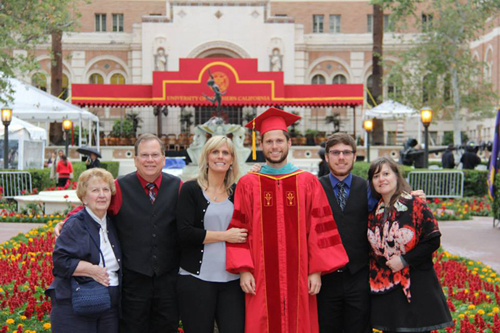 Shawn Roys and Family at his graduation from USC, 2015

Beyond the upper division Biological Sciences courses he took, Shawn was freed to take classes from the Physical Education and Psychology programs which undoubtedly were what gave him an edge against his competition. Courses like Kinesiology and Biomechanics from the PEP program connected the dots between the principles he learned in physics courses to those that apply to the movement of the human body. The Statistics for Psychology course offered by the Psychology Department taught him some of the most important concepts he would learn in terms of becoming a physical therapist, “I took a Statistics for Psychology class and once again, I had another instructor that really influenced me. I wasn’t really sure how much statistics I would encounter in grad school, but it’s essentially one of the components that is going to guide your practice as a Physical Therapist along with the evidence that is out there and the research that has been done, so going into grad school with a solid foundation in statistics really helped me run with it when they did expose us to it.” Along with Statistics in Psychology, Shawn took Lifespan Development, Pedagogy in Statistics for Psychology and Behavioral Neuroscience to name a few. Learning the ins and outs of the body-mind connection immensely helped once he was out in the real world treating real patients at USC.

Shawn’s undergraduate career at UAA may have helped him become a part of the alumni at the University of Southern California, but it was what Shawn did with the knowledge instilled in him that had made the difference. His strict routine at UAA translated well at USC where it meant getting up at 4 a.m. to be to class or the clinic by 6 or 7 a.m., working a full 8-10 hour day, going home or to the library to study for a few hours, then finally heading off to home for sleep and getting up the next day to start the routine all over again. The University of Southern California’s DPT program allows students to work with patients their first semester in, and Shawn took full advantage of the exposure, citing it as one of the driving forces that got him through the grueling schedule, “Treating patients during my first year was so important for me because you go to school to become a physical therapist and you do because you want to treat patients, and the next thing you know, you are spending hours and hours in the classroom and library and you start to forget why you are there; you are just so separate from it. Then the clinical rotation comes and you get to see patients and it reminds you, ‘Ok, this is why I am here.’ It revives you to go back to the classroom with the same kind of motivation you had when you first arrived.” 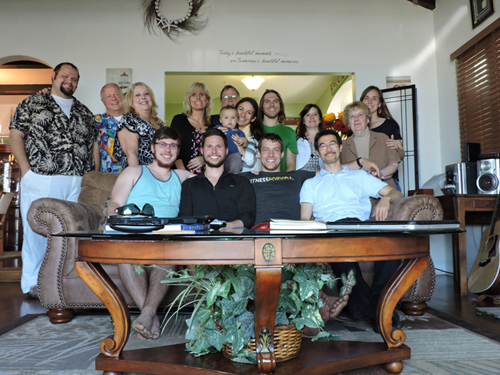 Motivation to thrive in school in order to get to the end goal of working with injured patients was always the name of the game for Shawn, but doing the actual work truly brought his education and passions 360°. Working in clinics spread throughout the greater Los Angeles area exposed him to a wide-variety of situations that he never thought he would encounter, however, having the strong biology and psychology background prepared him before he even realized how prepared he was; “My longest affiliation that I had was at a county hospital and the situations that I encountered, I had never encountered anything close to in my entire life…a county facility like that where it’s in the major metropolis of Los Angeles, you could come up with anything, and I’m sure it’s happening…the situations that these individuals are in, whether they are homeless, whether they don’t have strong family or social support, or whether they have a mental illness on top of physical injury, having gone through the psychology courses, I always knew it would be helpful but I don’t think I fully understood how beneficial it is to have that understanding that someone may be behaving a certain way because of a mental illness, because of the grief that they have or just the gravity of their situation. You are not as judgmental and can better serve the patients.” By the time of graduation, the clinical rotations Shawn had been through had pretty much taught him all he needed to know about dealing with real patients and their very real issues, both physical and mental, but another valuable source of information into the perceptions and experiences of patients was the good old internet. Sites like YouTube where physical therapy patients, particularly ones that have gone through amputations, prove to be just as important as information learned in the classroom or clinic because of the insights gained on individual perceptions of how to move, what feels best and how they’ve coped with recovery. Shawn said of the importance of the academic pot of gold, “What is interesting is there are so many resources out there to learn things from. Some individuals will post Youtube videos of ‘this is how I use my prosthetic,’ so other people that have had amputations can learn from them. It is really helpful for those that have gone through similar things and it’s also really helpful to physical therapists because now I see this individual who has their own perception of how he should move and how he should do things. It’s really insightful.” 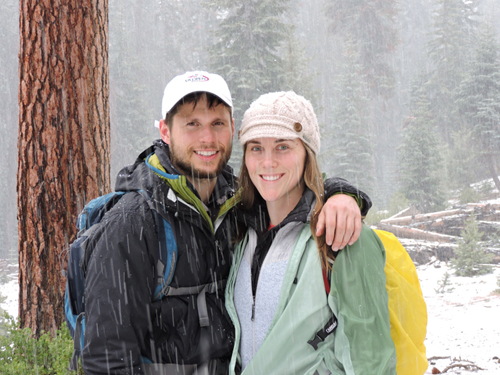 Shawn and his fiance

After three exhaustingly exciting years of practicing physical therapy, Shawn graduated this past spring with his Doctorate of Physical Therapy. He is currently studying to take the National Physical Therapy Exam and will soon after start scouting out clinics to join as a licensed Doctor of Physical Therapy. All the hard work he’s shown throughout his entire academic career shows what a dedicated student he is, however, the dedication he has shown to treating his patients, body and mind, is nothing less than admirable and shows the dedication he has to lessening human suffering. Clearly, Shawn continues to be in the unique position of being able to change people’s lives, and the end goal of doing so is just within his reach. In parting words to our students, Shawn gave one last piece of wisdom for them to remember that his end goal is really the only end goal practitioners-to-be should have in mind, “Make sure your intentions are for the patients, not for a financial reason or a status reason because I can assure you that when you are spending copious amounts of time in the classroom, it’s the patients that will get you through that and not the financial incentive. It comes back to the patients every time.”