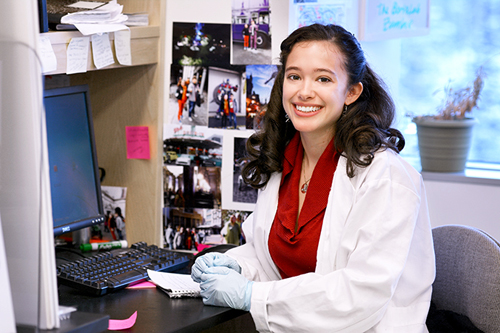 Melanie Alvarado at her desk in the Bortz Lab, UAA

Melanie Alvarado is somewhat of a staple around the ConocoPhillips Integrated Science Building at UAA. Studying Biological Sciences as an undergraduate and now attending UAA as a Master's of Science student and working as a teaching assistant for the Department of Biological Sciences, it's hard to come by a student or faculty member that doesn't know her smiling face.

During her time at UAA as an undergraduate, Melanie had a wildly successful string of opportunities that she took advantage of before earning her B.S. in Biological Sciences degree in the spring of 2014. Starting in 2012 as a sophomore, Melanie became involved with research when she joined Dr. Miki Ii's lab, a decision that sprang from her love of the genetics course she took with Miki, "I really love genetics, that's actually how I got into research. I went and talked with Miki, and we got along really well together, so for one whole summer I worked with her on DNA repair mechanisms in yeast cells." When talking of the experience, Melanie seems to beam with nostalgia musing, "It was awesome, such a good time. We were looking at subunits of RNase H2 DNA repair complex, seeing whether it would work downstream or upstream and comparing them to double and triple mutants within yeast cells…I just loved being in that lab, so I decided to continue with research. That next year I started applying to summer programs."

With an immaculate record like Melanie's, it is not hard to imagine acceptance into competitive summer programs would be rare, but sometimes it is just something you must leave to fate. Melanie did what many undergraduates would think to do, she Googled it. "I just randomly found them…most of the ones I applied to were random Google searches," she said laughingly. Not unlike many of today's students, Melanie also used the power of networking to find the right summer program that fit her research interests. "The way I found out about the University of Oregon SRUP program [Summer Program for Undergraduate Research (sic)] was through my best friend, she was like, 'hey, you are applying to all these summer programs and I just got an email from UAA about this one at UO.' She forwarded it to me, I applied and I just so happened to get accepted into it."

While participating in the 2013 University of Oregon summer REU program, Melanie expanded on the DNA repair mechanism research she conducted within the Ii lab but focused in on Fanconi anemia, a rare blood disorder that leads to bone marrow failure, cancer proneness and birth defects, and which is caused by an abnormal gene that damages cells and prevents damaged DNA from repairing. "The research I did down there was on Fanconi anemia, another DNA repair mechanism that fails within the patients…the patients usually don't live past six years old. Head and neck cancers are two of the most common diseases that occur as a result," said Melanie. The research team used Zebrafish as their model organism due to the fact that they possess all fifteen FANC genes that can be applied to humans. Guided by her faculty mentor, Dr. Sam. Peterson, Melanie focused in on FANCL, a gene that will recruit other DNA repair mechanisms within the patient if there is damage. Melanie and her mentor looked into whether treating patients with reactive aldehydes such as formaldehyde, acetaldehyde, and ethanol would help or hinder the DNA repair mechanisms, and at the end of the project they were surprised with the results. "We did get results, some of them were unexpected or inconclusive, but treating with ethanol showed an increase in hematopoietic stem cells, the number of blood cells being produced, which was the opposite of our hypothesis," stated Melanie. 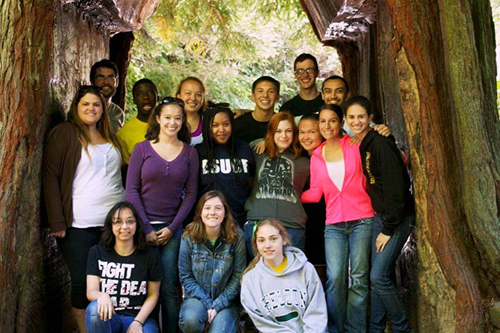 The University of Oregon REU program gave Melanie her first look at what life could be like as a professional biologist—the fast paced routine of doing experiments, the hours spent trudging over data in the lab, and the ever-exciting task of conducting research presentations. At the close of the SRUP program, Melanie was able to present at the Annual Biomedical Research Conference for Minority Students which was held in Nashville, TN. The entire experience had been a whirlwind and Melanie soaked in every second of it, even the dreaded research presentation, "I presented and it was a huge seminar…I was so nervous, oh my gosh...it was really great though! It prepped you for presenting in front of a large group. It was just a different experience and it was great to go out and see how they do it."

Armed with the experiences she had while attending the SRUP program, Melanie came back to Anchorage with a fresh perspective and a thirst for further development. Melanie was busy in her last year at UAA as undergraduate, very busy. During her senior year, Melanie joined Dr. Eric Bortz's lab, was instrumental in preparing and hosting the Annual Brain Bee competition with Dr. Caroline Wilson and her fellow Neuroanatomy and Neurophysiology classmates, and participated in UAA's Undergraduate Research and Discovery Symposium, receiving second place in the poster competition. Under her new mentor, Dr. Eric Bortz, Melanie began researching HIV activation via viral RNA, stating, "I was determining whether I could activate HIV by using viral RNA. I practiced dosing them, and if HIV did activate, then there would be a green cell within the microscope—I was trying to quantify, count out how many green cells I had, and determine if that dosage was significant enough to keep going with." 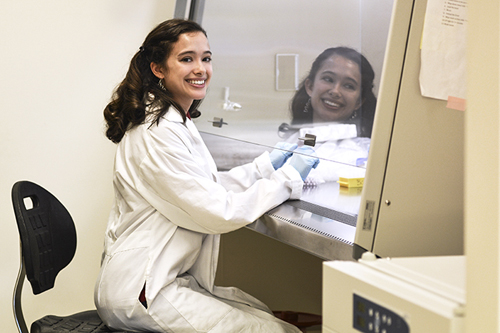 Melanie was one of the founders of HIV research within the Bortz lab, and has since expanded on the research as a Master's of Science in Biological Sciences student. In Melanie's current research, she is looking to identify and define proteins that may be allowing for HIV to be hidden within the body. Melanie explained the current work she is conducting in the Bortz Lab:

"People who are infected with HIV take HAART medication and once they stop taking it, it often leads into AIDS. We are looking to define this molecular pathway to contribute to a functional cure so that in the future they may not have to take these drugs for the remainder of their lives. I'm using viral RNA, like I did with my undergraduate research, and inducing HIV replication to wake up the cells—the HIV is expressed so that the immune system can come and attack it. The focus of my Master's degree is to look at chromatin modifying proteins that may be helping to activate the HIV. We are trying to define what the proteins are and if they are helping the HIV or helping to hide it within T-cells. I'm looking at an RNA-binding protein, NF90 that interacts with a DNA repair complex which could also be hindering or allowing HIV to be expressed."

Melanie is working to knockdown proteins in order to determine whether or not they are required to activate HIV within the cells. The dosage experiments with the viral RNA will also help her to see if there is an increase in HIV within the cells. Results have come slow for the research team, but it is all a part of the waiting game, and it doesn't stop them from moving forward, "We are trying to get results from those. That is always the thing, is trying to get results, trying to get it to work." When I say that any given day the team could find something that will change the research, Melanie optimistically exclaimed, "That would be awesome!"

As if the research Melanie is conducting doesn't sound academically challenging enough, she is also taking on the task of teaching undergraduates the basics of biology in the three lab sections of Intro to Biology she is responsible for. This is her second semester teaching the course, and so far, so good. As any teacher may be able to tell you, the learning curve is often steep;as soon as you think you have it figured out, something will come up that lets you know that you don't, with a resounding 'no'. Melanie dealt with this phenomena head on during her first semester, "I think the first semester was really rough because I didn't know how to adjust, I was kind of finding my way through it." Even though varying student audiences can be hard to figure out, there is always one secret weapon Melanie keeps in her arsenal, "The secret is to wear a lab coat!" she said lightheartedly. 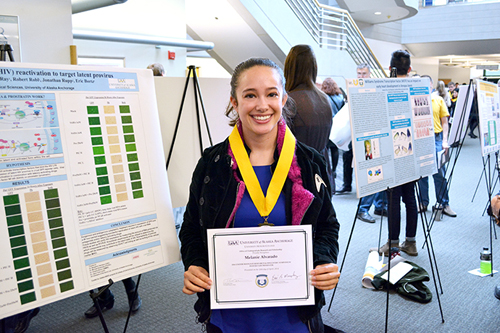 Mellanie Alvarado and her 2nd Place Award Certificate at the Undergraduate Research and Discovery Symposium, April 2014

The years have come and gone quickly during Melanie's time at UAA, and it was like yesterday to her that she was an undergraduate herself trying to figure out the intricacies of making life's biggest decisions like what to study and who to become. She learned a lot since the days of Googling summer research programs, and now she spends the little extra time she has available to mentor the students who've come under her wing. When asked if it feels rewarding shaping the futures of tomorrow's biologists, she simply said, "It's definitely weird;I remember talking with my professors and asking how I can do more research or get more involved, and last semester, I had a student who was really into environmental biology and I kept encouraging him and letting him know what avenues to take, told him about a few professors in ecology. I told him, 'Definitely go towards this, you will have a lot of work here in Alaska!'" The students of Intro to Biology need not worry about their futures if they take their cues from a professional like Melanie. Despite her picture-perfect path into the Master's of Science in Biological Sciences program, looking back she does wish she could have done more to get involved with undergraduate research earlier. In her parting words to our current students, Melanie said, "If you are into the sciences, get into research and see if you like it. Try it out in the field or at school in the lab. Start to explore because I know a few of my friends didn't like the labs, so they went into ecology and loved it. Get into research as early on as possible because you definitely want that experience to get hired anywhere. You never know until you try it out." If you ask us, these are words to live by, and if you know Melanie at all, you know she already does. 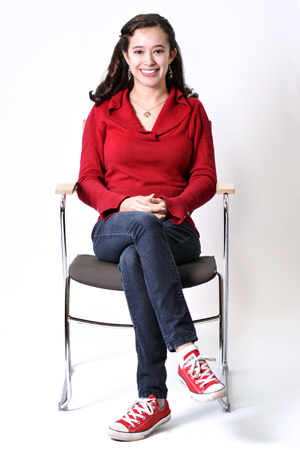