Alaska was still a territory in 1915 when the United States Congress set aside federal lands near Fairbanks for a land-grant college. In 1917, Alaska's territorial legislature approved a statute establishing the Alaska Agricultural College and School of Mines which opened in 1922. In 1935, the institution was renamed the University of Alaska. 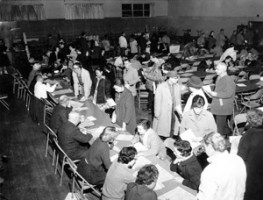 Students registering for classes in 1964, before the community college existed physically. 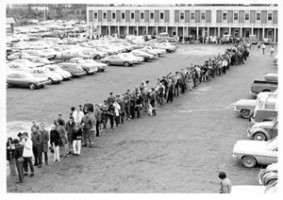 Eugene Short Hall is in the background in this shot of enrollment from the 1970s.

The original community college campus took form in 1971 when four buildings were completed around a rectangular maintained green space. These included Eugene Short Hall, Sally Monserud Hall, Beatrice McDonald Hall, and Gordon Hartlieb Hall. Each of these buildings is still in use today. In 1972 the Lucy Cuddy Center was built, which provided a place for the community college students to eat, gather, and also learn about the hospitality industry.

UA,A meanwhile added Buildings K and J (now referred to as the Professional Studies and the Auto/Diesel Technology) to the community college campus in 1973. In 1975, an addition to the Professional Studies Building was constructed as a Performing Arts Space (now referred to as the Wendy Williamson Auditorium and Memorial Lecture Hall). Towards the latter part of the 1970s UA,A added the Sports Center and Campus Center buildings which began to enrich student life. 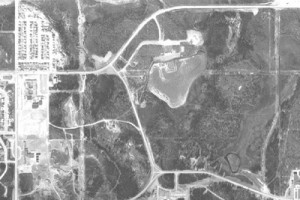 In 1977, the Regents separated Anchorage Community College from UA,A, now composed of the units of the former Anchorage Senior College. The community college's last buildings were constructed in 1983; Allied Health and the Book Store. In 1977 the Science Building was added which expanded the UA,A campus to two buildings. By the start of the 1980s the UA,A campus began to expand rapidly. First came Engineering, then the Administration and Humanities buildings (now referred to as the Administration Building), and student housing was built and occupied by 1985.

The advent of student housing marked a significant change to the campus atmosphere. Until then, all had students had commuted. The Fine Arts building was the last facility to be constructed in the 1980s. In 1987 the Regents merged the former UA,A, Anchorage Community College, Kenai Peninsula College, Kodiak Community College, and Mat-Su Community College into a single entity: the new University of Alaska Anchorage (UAA).

In the 1990s new construction on the Anchorage campus consisted of the Business Education building, student housing, and the Central Garage. The Business and Education building, now known as Rasmuson Hall, was the first new building built on the former community college campus. This building is also the western starting point for the enclosed elevated walkway referred to commonly as the "Spine." The elevated walkway was not entirely enclosed until 2002, providing full weather protection. Today the Spine includes informal student gathering spaces, study areas, and extends from the Business Education building to the Consortium Library. Other buildings include the addition to the Consortium Library and the Ecosystems Biomedical Laboratory (EBL). 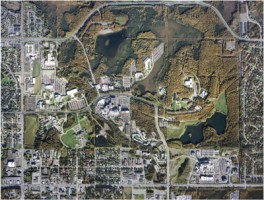 An aerial from 2001 shows a much more developed campus district.

Significant new construction on the Anchorage campus since the year 2000 includes the Alaska Native Science and Engineering Program (ANSEP) building, the ConocoPhillips Integrated Sciences building and adjacent parking garage, and a new Health Science building on recently acquired land on the south side of Providence Drive. A new undeveloped parcel has also been acquired at the southeast corner of Providence Drive and Lake Otis Parkway. Currently under construction is the Alaska Airlines Center, and a new Engineering Building.

Other off-campus additions have been made to the UAA real estate holdings in the past 30 years: the Aviation Building at Merrill Field, the 7th and A Street Building in downtown Anchorage, the University Center, and the Bragaw Office Complex. All of these buildings provide teaching, research, and learning spaces for the university.

UAA's Anchorage campus has evolved in the last 43 years from its beginnings as a community college to a full scale university that competes on a national level in academics, research, and athletics. It also provides a unique experience to students as a university in a major sub-Arctic city.

NOTE TO READERS: This history is excerpted from the new UAA 2013 Campus Master Plan (PDF), with background and assistance from UAA History Professor Emeritus Will Jacobs. The history section begins on Page 82 of the report 90-page report.