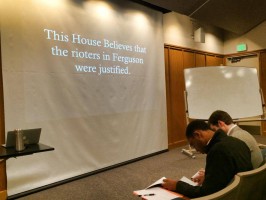 Seawolf debaters traveled to the Seattle University campus Dec. 6-7 to compete against 36 of the best teams in the Northwestern U.S. and Canada. By the end of the tournament, it was clear UAA had one of the deepest talent pools present.

Competition kicked off Saturday morning with the first of many socially charged debates, specifically engaging in a debate around the riots in Ferguson in Round 1 while protests occurred just several blocks away throughout the weekend. The day continued with questions of what to do with homeless encampments, foreign policy, military tactics and consumer data privacy breaches.

By the end of Round 5, all but one of UAA's seven teams were still in contention to advance to the semifinal round. At the end of six preliminary rounds, the team of Sarah Elton and Sam Erickson advanced along with fellow Seawolves Matthieu Ostrander and Jonathan Taylor to the semifinal phase of competition at the top of the preliminary rankings. Elton and Erickson were the top-ranked team at the end of the preliminary phase, having dropped only two of the potential 18 points available. Their teammates Ostrander and Taylor were hot on their tails as the second-ranked team.

Faced with the question of whether the LGBTQ community should abandon the claim of sexuality determined at birth, it was the team of Ostrander and Taylor who advanced to represent UAA in the final round. Joining UAA were teams from Claremont College, Seattle University and University of British Columbia on a debate about whether the United States should completely subsidize the cost of college education for its citizens. In a very close decision, Ostrander and Taylor were named the second-place team.

In addition to the second-place team and semifinal awards brought home, UAA's individual speakers dominated the top 10 speaker rankings, sweeping six of the spots. Ostrander was named top speaker and his partner Taylor named second. The team were followed closely by Erickson in third and Elton in fifth. AJ Carver placed sixth and Johanna Richter placed eighth. About half of the UAA debaters at this competition are in their first year of collegiate competition, qualifying them for novice speaker awards. Jacob Shercliffe took the second novice speaker award, while Erickson took top novice speaker.

The success of the weekend bodes well for UAA, in both the immediate future as the squad travels to the World Universities Debating Championship in Malaysia and in the long-run as our novices continue to build upon their accomplishments.

After the World Universities Debating Championship, the team will turn its attention to once again hosting the Cabin Fever Debates, UAA's intramural debating tournament, beginning Jan. 27. For more information, please contact Steve Johnson at (907) 786-4391 or Amie Stanley at (907) 786-4354 or visit the Seawolf Debate website.