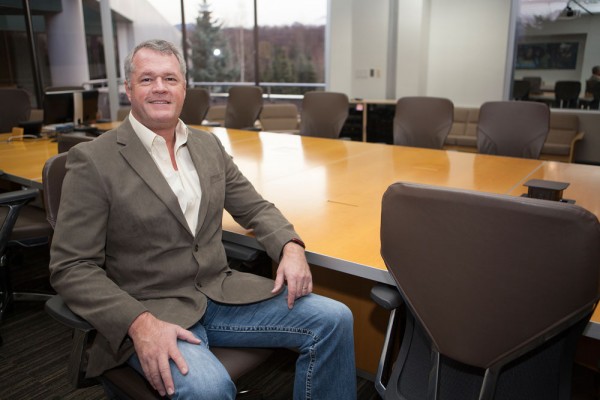 John Nofsinger, a professor of finance in the College of Business and Public Policy, has researched socially responsible investing. He edited a textbook on the topic. (Photo by Philip Hall/University of Alaska Anchorage)

A couple of weeks ago, a friend told me he wanted to make sure none of his retirement funds were invested in the gun industry. That same week, another friend described her dismay at an investment she'd made in an obesity drug that had failed to take off, even though Americans face a weight crisis.

I flashed on a recent visit with my own financial advisor. These meetings are difficult for me. I feel overwhelmed by what I don't know and fearful of making a stupid decision that will deposit me on a street corner in retirement.

So, when he asked if I wanted to direct my investments toward any socially responsible causes, I just shook my head no. Another whole layer of complexity would paralyze me. I still feel guilty about it; I should be concerned about the good or evil my own money might cause.

About that time, the whole Volkswagen emissions scandal hit the news. Here was a company touting its entry into a socially responsible index fund based on its great emissions performance, only to learn they were cheating. Even if I were trying to make the right choices, how would I avoid a trap like Volkswagen?

UAA happens to have an expert on socially responsible investing. His name is John Nofsinger, a professor of finance and the William H. Seward Endowed Chair in International Finance.

Nofsinger is completely fascinated with how and why humans invest. We are fickle beings. We like to win, so we refuse to sell high. We hate losing so much that we hang on to a bad stock at least until we can make back what we put in. Both are irrational decisions.

Naturally, socially responsible investing is another window into our humanity, and the main reason Nofsinger got hooked enough to edit the textbook on the topic.  I sought him out with a slew of questions.

OK, here's the big one. How do you do financially when you make socially responsible investments? Better or worse than a traditional approach?

Research shows it's a wash. "There have been a quite a few studies that look at that, in all kinds of areas," Nofsinger said. "In general, they show you do not earn better returns than if you just invested in the regular market index."

One risk he sees is diversification. "If there are 10,000 stocks out there, but because of your values, you're only looking at 4,000, you've limited yourself, and your diversification may not be so good." Still, studies hold up that your returns still aren't much better or worse than a traditional investor.

One positive impact socially responsible investing has had is on the governance structure in companies, diversifying their board of directors. For about a decade, investors pushed for this, and they got it. "Victory!" says Nofsinger. "The more ideas at the table make for better decisions." Turns out, diversity is just good business.

But that opportunity has pretty much played out, he said. "There's no more extra returns to be earned from that strategy anymore."

One of the most interesting things about socially responsible investing is looking at the values they are built on. One man's value is another man's scourge. Distinctions come to light quickly with the "sin stocks," as he calls them - alcohol, tobacco and gambling.

While Muslims and Mormons have a religious value against tobacco use, Catholics have no trouble smoking a cigarette or taking a drink of alcohol. "They even have bingo," he laughs, a form of gambling often used to raise money for good causes.

Nofsinger says socially responsible investing has two approaches: a negative screen (avoiding companies that do things you might oppose, like sell cigarettes) and a positive screen (seeking out companies that work hard for things you value, say environmental responsibility.) They generally fall into environmental, social and governance categories.

The concept has always been around, but grew more widespread during the apartheid movement in South Africa. A concern for humanity is a bottom line, for example, how a company treats its labor pool in another country. "Do I feel comfortable buying these tennis shoes that were constructed by a 10-year-old making three cents an hour?"

Other social concerns, like the glass ceiling for women and diversity on boards of directors, have gotten attention. A more recent version has to do with partner benefits. Most companies provide benefits for spouses, but what if you live in a state that does not recognize gay marriage?  A company can still choose to extend its benefits, and investors can come down on either side of that.

In the end, Nofsinger let me off the hook for not choosing the socially responsible route so far.

"It doesn't mean you don't care," he said. "A lot of people will say 'my portfolio is my portfolio.' I will put that in one mental account in my mind. With my other mental account, well, I can be out there protesting for causes or donating to charity. Those activities have a more direct and rewarding impact." A version of this story by Kathleen McCoy appeared on the Alaska Dispatch News on Sunday, October 2015.