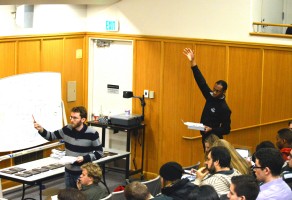 A University of Victoria debater, left, and UAA debater Jonathon Taylor, right, rise to offer a point of information.

The UAA Seawolf Debate Program flew its largest squad ever to compete at the Seattle University Worlds Debate Tournament Dec. 5-6. Fifty-two teams from the Pacific Northwest region - ranging from the University of La Verne in California to the University of Victoria in British Columbia - attended the competition. Nine teams traveled to represent UAA and made an exceptional showing, but it was the team of Jonathon Taylor and Johanna Richter that sealed the deal and earned the right to be called tournament champions.

Over the course of two days, the Seawolf debaters rose to the top of the tournament bracket. Having impressed judges on topics as varied as gun rights and problems of domestic violence in professional sports, three UAA teams secured themselves spots in elimination rounds.

At the end of five preliminary rounds, Taylor and Richter were the top-ranked team at the tournament and were joined in quarterfinals by third-ranked teammates Sarah Elton and Sam Erickson and fourth-ranked Matthieu Ostrander and Jacob Shercliffe.

All three teams moved into semifinals, where they took up the question of Russia's involvement in the fight against ISIS in Syria. Ultimately, Elton and Erickson would advance alongside Taylor and Richter to the final round, giving UAA a 50 percent chance of winning it all against a team from Regis University and the University of Victoria.

The final-round motion, "Safe spaces are incompatible with the goals of higher education," challenged the debaters and audience to test their beliefs about the inclusion of all in education, and protections that should be afforded to them in the process. It was the compelling case that individuals cannot learn unless they feel safe in institutions with entrenched power structures - an argument developed by Taylor and Richter - that swayed the judges most.

In the novice division, the team of Hayley Cavitt and Demry Mebane took second place, representing themselves on behalf of another UAA team, Arina Fillipenko and Stephen Kranich, who came out of preliminary rounds as the top-ranked team but were unable to compete on elimination day.

Beyond the great strides made by all teams in the elimination round, a number of Seawolf Debaters excelled to earn a place among the top individual speakers of the tournament.

Having secured the top team after preliminary rounds, top speaker and tournament champion, Taylor and Richter pulled off the perfect competition record - the hat trick of debate.

Two years ago, Taylor and Richter made a name for themselves at this very tournament during their first year of intercollegiate debate, when they won the final novice round and Jonathon Taylor was named top novice speaker.

Since then, they have had a great deal of success and distinguished themselves as a powerhouse team. Both are Alaska-grown debaters who came to our program locally. Jonathon Taylor was a recruit from the Cabin Fever Debates, UAA's intramural tournament for UAA students that kicks off in January each year, and Johanna Richter was a Service High School debater who also participated in the Northern Lights Invitational, UAA's Worlds-style tournament for high school debaters.

Their acumen as a collegiate debate team earned them the right to be the sole representatives of UAA at this year's World Universities Debating Championship in Thessaloniki, Greece, scheduled at the end of December.