Why speaking English is never neutral in Alaska 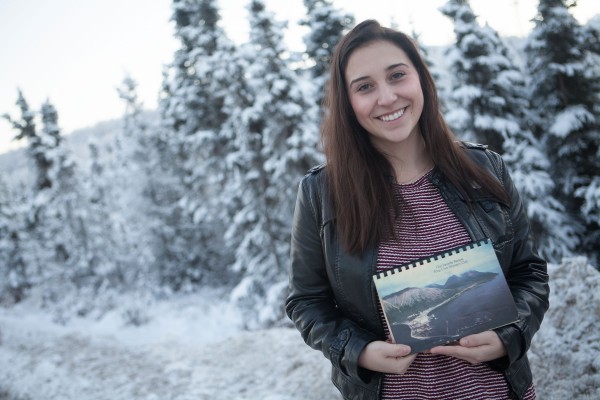 Samantha Mack with the cookbook she analyzed in the History of English class with Professor Jennifer Stone. (Photo by Philip Hall / University of Alaska Anchorage)

In universities across the country, professors dutifully lead students of English through that language's many major influences-fifth century German invaders, eighth century conquerors from Scandinavia, Shakespeare's early modern version, borrowed words from Latin and ancient Greek, then Old English, Middle English, on and on until today-when contemporary English encircles the globe.

Coming to Alaska and experiencing its rich indigenous and immigrant cultures helped Stone, and now her graduate and undergraduate students, add a fresh chapter-one on Alaska English.

"There's not much on it," Stone said; she and her students quickly consumed the available scholarship. But time in Alaska quickly convinced her that additional valuable work could be done.

Her important influences included the opportunity to participate in a summer 2013 cross-cultural immersion camp at Point Lay, arranged by the Alaska Humanities Forum. Her written reflections on that trip respectfully blend local words-tupiq (tent), kiktubiaq (mosquito) and many others-into her English account of the visit.

Also about that time, Stone began taking Yup'ik language classes and thinking carefully about how to incorporate Alaska Native knowledge into her teaching practices. She realized a class on the history of English needed to include language-shaping interactions so common in Alaska-both historic and present day.

So Stone modified her course. Instead of having students select any English language text for a linguistic analysis, she began requiring them to analyze a textual artifact from Alaska.

She broke the state's history into discreet units with representative texts. Students could pursue shipboard diaries dating back to first contact in 1778, a 1930s journal from St. Lawrence Island, John Haines' memoir, even the state's own constitution-right up to a contemporary local cookbook and an Alaska-centric video game.

So what's the point of all this? Stone wants her students to discover and understand how complicated the arrival of English in Alaska has been, and continues to be.

"English has good and bad histories in this state," Stone said. "These students are English majors so they love literature and words. They have benefited from the idea of English as unproblematic, as good. It can be hard to unlearn those taken-for-granted ideas."

Stone is talking about Alaska English in context with the heritage of English-only boarding schools, where children were punished for speaking their traditional tongue based on a misguided belief, Stone says, "that Native languages were not capable of expressing civilized and Christian thought."

Today, experts know different; they understand how closely tied are language, culture and identity; how every language has its own appropriate grammar. Once language dies, culture is threatened.

Certainly, Stone is not against English. "I would never argue that people shouldn't have access to the forms of English they need to participate in our economic and governmental systems," she said. "But I don't think that negates language diversity. Historically it has been framed as an either/or."

So even today, institutions like universities, schools and government can insist on heavy-handed regulations. "Grammar can be aggressive and judgmental," Stone said. That's why it's important that graduates who go into teaching or other public fields understanding the impact English has had on the state.

Here are a few samples of her students' work.

Jennifer Jenkins examined A Study of the Slattery Plan for Alaska Development, produced in 1940 by the Alaska Planning Council. The plan called for inviting European refugees to help populate and develop Alaska. The planning council's analysis turned the potential newcomers' racial type and religious character (displaced Jews from Germany) into the most serious problem with the plan.

"I was looking at the taboo of euphemism," Jenkins said. "In two sentences, the analysis made race and nationality the most important question, and then ignored it for the rest of the report." 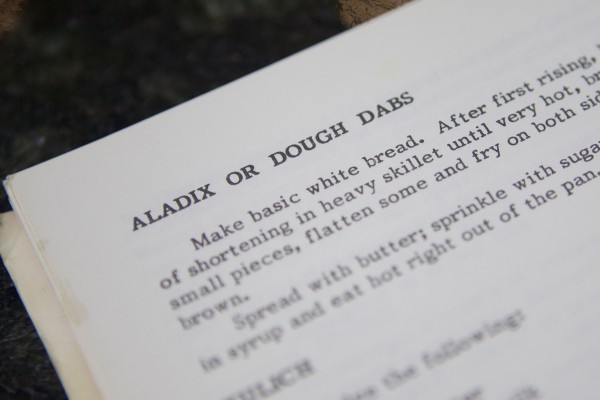 An entry in the cookbook Samantha Mack analyzed in her History of English class. (Photo by Philip Hall / University of Alaska Anchorage)

Senior Samantha Mack, a political science and English double major with a minor in Native Studies, is Aleut. She grew up in a fishing family in King Cove. For her linguistic analysis, Mack took a close look at her family's copy of the 1991 King Cove Women's Club Cookbook. Practically every household in King Cove owns one; Mack's aunts contributed recipes.

What caught her eye was the practice of "code-switching"-swapping between English, Russian and Aleut languages, as well as standard and village English-within recipes. In the classic recipe for fry bread (universal among indigenous cultures worldwide), residents insisted on including the local common name, aladix. Mack isn't sure if that word is Russian or Aleut, but is definitely preferred among locals.

Researchers consider "code-switching" in written documents, such as the cookbook, to be "an act of intentional subversion." Mack called it "a form of resistance" to the overpowering language intrusions in the rural community. She notes that language revitalization projects surged in popularity at the same time the cookbook came together.

Stone is trying to work on how English studies can be more supportive of language reclamation and revitalization, and end the historical cycle of dismissing other languages. "There's a culture loss there," she said.

So that's why Stone insists that "in Alaska, there is never a neutral moment of English usage. That's the takeaway."

A version of this story by Kathleen McCoy appeared in the Alaska Dispatch News on Sunday, Jan. 17, 2016.