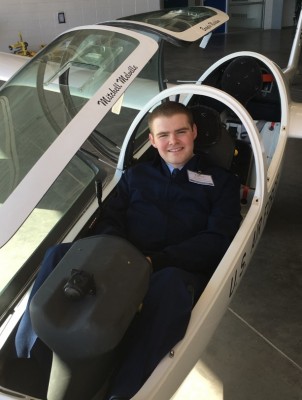 Tyler Stevens is part of the Air Force ROTC at UAA. He attended this year's National Character and Leadership Symposium in Colorado Springs.

Tyler Stevens joined Air Force ROTC to serve his country and develop his leadership skills. At this year's National Character and Leadership Symposium he had the opportunity to do just that.

The University of Alaska Anchorage electrical engineering student and Eagle River High School alumnus was nominated to make the chance-of-a-lifetime trip because of his outstanding performance as a member of UAA's ROTC Detachment 001.

The symposium is an annual event held at the United States Air Force Academy in Colorado Springs, Colorado, that brings together scholars, military leaders, corporate presidents and world-class athletes to discuss the power of character and leadership.

"Tyler's smart and extremely motivated," noted detachment commander Lt. Col. Matthew Beer. "He's got the kind of character that will make him a superb future leader."

"Chief Master Sgt. José Barraza's talk on professionalism and the profession of arms was my favorite," said Stevens. "He's a phenomenal speaker and his discussion about how being a leader in the Air Force changed his life was truly inspiring."

Participation in the symposium also gave Stevens a chance to reflect on what makes ROTC and UAA so special.

"UAA is such an open and diverse place, with people from all over. It's easy to develop a broader view of the world in a place where the faculty and students are so inclusive."

Air Force ROTC is proud to be part of the UAA Community & Technical College. For more information, visit uaa.alaska.edu/afrotc.